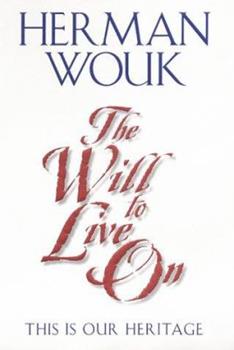 The Will To Live On: This is Our Heritage

Herman Wouk has ranged in his novels from the mighty narrative of The Caine Mutiny and the warm, intimate humor of Marjorie Morningstar to the global panorama of The Winds of War and War and Remembrance. All these powers merge in this major new work of nonfiction, The Will to Live On, an illuminating account of the worldwide revolution that has been sweeping over Jewry, set against a swiftly reviewed background of history, tradition, and sacred literature...

Published by Thriftbooks.com User , 13 years ago
very interesting book. wouk manages to cover a huge amount of history and culture and keep it fresh. it teaches about jewish culture and religion and busts some stereotypes and myths along the way. if you're interested in judaism, history, zionism, and the israeli state i'd highly recommend this book.

a little chatty but deeply moving

Published by Thriftbooks.com User , 18 years ago
Anyone interested in Judaism, what it means to be a Jew, Jewish history, Jewish meaning will love this book. It's usually very well written eloquent prose although sometimes it's a bit too diary-conversational.

Published by Thriftbooks.com User , 20 years ago
In a career of fifty years or so, Herman Wouk has published less than a dozen novels. Fortunately, the time he puts into his work shows and nearly all of his works are five-star quality. This book, a non-fiction follow-up to This Is My God (which is the only book of his I haven't read), continues the high-quality trend.Although designed for a Jewish audience, this book has plenty to offer anyone who wishes to learn more about Judaism and the direction it is going. This is a good blend of history, theology and memoir, well-organized and filled with detail without losing readability. I found of particular interest the second part, "The Heritage, or the Power of a Dream" which describes the sources of Jewish thought and tradition.Although not very religious myself, I am often fascinated with religion, and this book is a good addition to my collection on the subject. As he states in the Afterword, "If this book in any way helps readers to rethink the [future of Judaism] for themselves, I will have done, to the best of my ability, what I set out to do." He has accomplished this task very well.

A heartfelt look at Jewish survival!

Published by Thriftbooks.com User , 22 years ago
At 84 years of age, Herman Wouk, one of the giants of contemporary American Jewish literature, presents his view of the survival of the Jewish people. His narrative moves back and forth between a thumbnail sketch of Jewish history and a colorful personal history . He indicates that the two motivating forces that have kept Judaism cohesive and growing during the twentieth century--the Holocaust and the birth of the state of Israel--are no longer of recent enough memory in the younger generation to ensure Jewish survival. Are there other factors, as the twenty-first century begins, that can influence young Jews to preserve their ancient heritage? This is the tough question the author attempts to address.Wouk's whirlwind tour of Jewish history is unsatisfactory because it flies through time and presumes an in-depth knowledge by the reader. Far more satisying are the author's personal reflections as to how his life experiences and knowledge of the past allow him to appreciate his Jewish heritage. What seem to be lacking at the beginning of the book book are fill-in-the-blank kind of things. It is almost as if the author's intention is to get his readers to find the missing information by going to Judaic sources and reading what they need to know to preserve the Jewish faith. Nice ploy! THE WILL TO LIVE ON concludes with Wouk's thoughts about the survival of the Jewish people into the distant future. His impressions differ regarding the Jews of Israel and those of the diaspora. He has one especially important thought to share about how diaspora Jewry can ensure their survival. It's not worth peeking at the last few pages of the book ahead of time, however, because the strength of Wouk's case slowly builds throughout the narrative. The reader can then sit back and truly savor the elderly author's insightful conclusion.

Portable, Pleasant, and Not Pedantic

Published by Thriftbooks.com User , 22 years ago
I read this book in three evening sessions, and, like his book written 40 years ago (This Is My God) Herman Wouk is at his relaxed best.The Will to Live On is a delightful one-sided conversation in which the 82-year-old author talks about the loves of his life: Judaism, his family, and his people, or amchka (your people), sweeping through several thousand years of Jewish history and a lifetime of study, work, and just living as a Jew, son and grandson of immigrants, an American and a patriot.Wouk, an ever-observant Orthodox believer, is a facinating person and believable because he has lived well, written well, and lived what he believes. But not only for his religious core is he interesting, but because, as the Jewish people like to say, he is a person, and the kind of person who can be truly Orthodox, without orthodoxy, and respectful of the vast differences within the Jewish experience, leaving no one out. And while being Orthodox, Wouk calls himself a humanist, for which he gives only scant definition or explanation in his book... my only criticism. His claim to be a humanist, unless he has redefined the term in some cleaver way, does not jibe with his core message. Possibly, in spite of his full reading of Jewish scripture, the author has not read or understood the passage, "I will raise up your sons, O Zion, against your sons, O Greece." He addresses himself largely to the great American Jewish community, which, he strongly implies, has gone about as far as it should go into the vanilla world of assimilation, better known to all ethnic and religious Americans as "the melting pot."I saved the last few pages to read very slowly because they contain the reason for the book. The Will to Live On, of course, deals with the eternal and earthly struggle, miracle, and adventure of a people who, in spite of their unique relationship with their G-d, still need to seriously take stock of their heritage and their origins, lest they have nothing uniquely Jewish to pass on to their children, or no children to pass it on to. The last few pages contain Mr. Wouk's key to this restoration and I won't tell you what it is because you need to read the first 300 or so pages to appreciate the last two.As a proper antecedant to Mr. Wouk's discussion, and for full impact, I would recommend Ehud Havazelet's recent book, titled Like Never Before.May the author's your years continue, as he brings to completion more of those unfinished titles from his worn and torn file folders. Forty years was too long to wait for this one.
Trustpilot
Copyright © 2022 Thriftbooks.com Terms of Use | Privacy Policy | Do Not Sell or Share My Personal Information | Accessibility Statement
ThriftBooks® and the ThriftBooks® logo are registered trademarks of Thrift Books Global, LLC