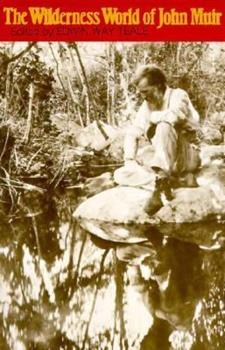 John Muir lived from 1838 to 1914. During that time he covered most of the American wilderness alone and on foot without a gun, without a sleeping bag, with only a sackful of stale bread and tea.... This description may be from another edition of this product.

Published by Thriftbooks.com User , 13 years ago
A wonderful sampling of Muir's writings and his timeless perspective on the wonders of our natural world.

A Wind Storm in the Forest,

Published by Thriftbooks.com User , 14 years ago
excerpted from Muir's The Mountains of California, is one chapter I've read many times. He climbs to the top of a Doug Fir so that he can experience a 100' tree swaying 30° back and forth "rocking and swirling in wild ecstasy" I take this book backpacking (there's no ultralight version yet...) in the Sierra most times and there's always something to read that fits the setting. EWT's intro is very sweet as are the

Published by Thriftbooks.com User , 14 years ago
I really enjoyed this book as it was focused on plants and animals. My favorite chapters were "The Water Ouzel" (a bird) and "Stickeen" (a dog). However, the whole book was interesting and enjoyable, including chapters about different people he met along the way ("The Robber" and "The Blacksmith"). This book is titled as "a selection from his collected work." I enjoyed his writing so much that I will look for a complete volume of his works so I don't miss out on any other great stories.

Published by Thriftbooks.com User , 15 years ago
I am often asked for a recommendation of what among Muir's writings, or writings about him, one should first read. After spending more than 30 years appreciating both his writings and most of the books about Muir that have been published during that time, and after ten years editing the John Muir Exhibit online, I can only turn to the same book that originally enthalled me with John Muir: The Wilderness World of John Muir, edited by Edwin Way Teale. This book was edited by someone who was himself an able naturalist and nature-writer, and therefore someone who could understand Muir in a way that most academics, whether professors of literature or historians, cannot. Edwin Way Teale (1899-1980), has been ranked as a nature writer with been ranked with Henry David Thoreau, John Burroughs, as well as John Muir himself. His honors include being elected as a fellow of the American Association for the Advancement of Science, receiving the John Burroughs Award in 1943, and the Pulitzer Prize in 1966. He was the author of 32 books. Teale's sympathy for Muir's message is shown in the book's Dedication page, which is "Dedicated to The Sierra Club, The Wilderness Society, The National Parks Association, and all those who are fighting the good fight to preserve what John Muir sought to save." This book serves as both an anthology of the very best of Muir's writings, and also a biography, compellingly provided by Teale. The biographical value of this work is often under-stated, even by the publisher. The book is typically viewed as an anthology, and indeed it is, primarily; but it also contains a wealth of biographical information, far more than the typical anthology. Teale commences his book on John Muir with an authoritative 10-page Introduction, that not merely identifies the key events in Muir's life, but provides an assessment and perspective of how Muir stacks up with other nature writers. He provides facts you won't find elsewhere: "While visiting friends, Muir sometimes would talk four hours at breakfast." Teale, writing in 1954, was able to talk with several people who knew Muir personally. He noted that everyone he talked to had a different view of which phase of natural history held first importance in Muir's mind. Some thought it was trees; another thought it was geology, another plants. Teale points out the fourth view, probably the nearest right of all: "... the whole interrelationships of life, the complete rounded picture of the mountain world. Today, Muir probably would be called an ecologist." Teale 's assessment of Muir as an "ecologist" pre-dates the "ecology movement" of the 1970s by at least 15 years. Teale admirably tells of the scope of the places, glaciers, plants, and animals named after him, and Muir's contributions to science and conservation. Although public appreciation for Muir has grown dramatically since Teale's book was first published in 1954, The Wilderness World of John Muir still provides the best introduction to Muir'

An excellent place to start

Published by Thriftbooks.com User , 25 years ago
Whether you are interested in John Muir specifically or just want to read about an interesting life, this book is an excellent place to start. John Muir had an incredible and important life, and it is told here succinctly in his own words, excerpted to emphasize the profound. It is a glimpse into a lifestyle 99.9% of us will never know, yet it is truly important to our times. His love of nature, adventure and exploration is a reminder of why we need to experience more than our 9 to 5 workdays and why we need to apply ourselves to the protection of the Earth.Muir was a gentle but strong man, a genius with simple needs, solitary yet influential. This book is a terrific way to look into his life and his time and to gain some inspiration into our lives and our times.
Trustpilot
Copyright © 2022 Thriftbooks.com Terms of Use | Privacy Policy | Do Not Sell My Personal Information | Cookie Preferences | Accessibility Statement
ThriftBooks® and the ThriftBooks® logo are registered trademarks of Thrift Books Global, LLC