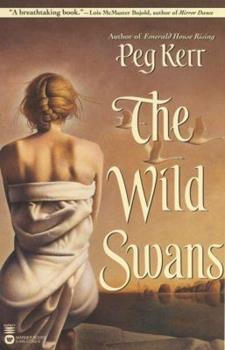 A uniquely evocative novel of two eras, two outcasts, two journeys... FROM THE OLD WORLD England, 1689: Banished from her father's house, Lady Eliza Grey's one wish is to find her long-lost brothers. She does, only to discover them enslaved by a strange and terrible magic. Now, caught in a fairy tale turned real, she vows to break the spell and free those she loves -- even though her loyalty may cost Eliza her life... TO A NEW WORLD New York, 1981:...

Published by Thriftbooks.com User , 21 years ago
This book is one of the most beautifully structured books I've ever read. I found the parallels effective and subtle, and thought that they added a lot to the story, especially some of the less-obvious ones. However, neither of the stories felt "bent" to fit the other; each proceeded on its own, but the parallels were there. The characters were complex and interesting, and the description is especially striking. I found Elias's story as his friends fell to AIDS one by one to be absolutely chilling. I highly recommend this book.

Not what I expected, but magnificent still!

Published by Thriftbooks.com User , 22 years ago
I purchased this book solely because of the author. After having read Emerald House Rising, and finding it breath taking, I was willing to give anything by Peg Kerr a chance. I was not disappointed. I picked up the book one morning and finished the following evening, the whole time loathing each interval where I had to put it down, as it was completely captivating. The Wild Swans entails two parallel plots that do not seem entirely parallel until you reach the end. The two tales are so different that it is an astounding feat of the author to have tied them together so perfectly. Ultimately each left the imprint that family is precious, and must be fought for despite persecution, sought for despite apparent disappearance If not for the author, I never would have chosen to read this book, as it is in no way related to the normal choices of my reading. Yet I found it to be fascinating, as well as eye opening. The characters are well developed and presented, consistently conveying emotion in both action and speech. Both story lines are well thought out and flowing, each making you desire to keep turning pages. Altogether an enchanting, not to mention horizon broadening, read.

Published by Thriftbooks.com User , 22 years ago
Not-quite-parallel, but related stories set 300 years apart, tell the stories of two young people who may or may not be related by blood but are definitely related by misfortune. "The Wild Swans" is partly a reworking of Hans Christian Anderson's fairytale about a girl who must save her brothers from a spell which has turned them into swans, and partly a tale of a young man rejected by his family because he's gay. It's a remarkably apt connection to have made because the message of the AIDS activists - Silence = Death - is so important to both stories. There are many points at which the stories can and do meet, but one of the most elegant is the idea of the weaving of the nettles (for which, substitute grief and memory) into the shirts (read the AIDS quilt) which will release the swan-men from their enchantment (a symbolic gesture of solidarity and support for AIDS victims and AIDS research.) Without beating her readers over the head with a message, Kerr manages to express all the most important ideas and emotions in a graceful narrative that has moments of remarkable beauty. Highly recommended.

The most heart touching book ever

Published by Thriftbooks.com User , 23 years ago
This book must be placed on a par with Mercedes Lackey's Last Herald-Mage Trilogy. The book is touching as it causes you to understand the hardships both characters faced. The thing that I found very interesting is the parallels between the 1600s and the 1980s. The author took two completely different stories that should have had nothing to do with each other and combined them into one. There are cross-over phrases that are used in both stories and two versions of the same character (e.i. Jonathon/Sean, William/Bill) that were truely interesting. The ever present symbolism of the swans and the white rose toward the end of the book made the stories more poignant and thought provoking. Though some may say that the two stories have nothing to do with one another, they actually do in fact parallel each other to create a story that will be remembered. I forsee Peg Kerr becoming one of the major voices of fantasy in a few years.

Published by Thriftbooks.com User , 23 years ago
I had the pleasure of watching this book being written, as Peg Kerr and I are members of the same critique group. So I was delighted when its editor asked me if I would supply a cover-blurb. I kept it short, but as usual, it got cut for space in the final cover design. It read in full:"Peg Kerr has written a breathtaking book. It has three parts: fairy tale, reality, and the silent spaces in between. Like music, the silences are as vital as the tones. And like music, it will play in your head long afterwards."All most assuredly meant.I think the Kirkus reviewer must have been reading in his sleep. Elias is not a descendant of Eliza so much as a reincarnation in another universe; the connections, sometimes playful, sometimes profound, between the two threads of the book run through a sort of thematic hyperspace, and are to be found on nearly every page. I think it was most brilliantly and delicately done, and I recommend it to your attention.Best regards, Lois McMaster Bujold.
Trustpilot
Copyright © 2022 Thriftbooks.com Terms of Use | Privacy Policy | Do Not Sell My Personal Information | Accessibility Statement
ThriftBooks® and the ThriftBooks® logo are registered trademarks of Thrift Books Global, LLC