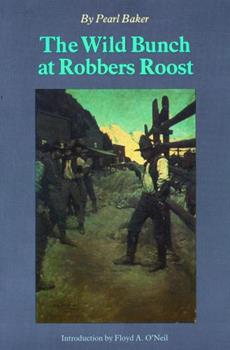 The Wild Bunch at Robber's Roost

Robbers Roost was a hideout for outlaws and hunted men long before Butch Cassidy found it in 1884. The impenetrable wastes and wilds of this high desert country in southeastern Utah, cut through by canyons along the Green and Colorado rivers and bounded on the west by the Dirty Devil, discouraged lawmen from pursuit. Growing up on a ranch that included Robbers Roost, Pearl Baker heard many of the legends about-and talked to many who remembered-the...

A great book about Butch, his gang, and southern Utah

Published by Thriftbooks.com User , 16 years ago
This is an excellent book about Butch Cassidy, his gang, and the myths and legends that surround them. That it's written by someone who knew and lived among many of the stories' characters makes it even better. Butch Cassidy was a jack Mormon outlaw, back in the 1880s, 1890s, and early-1900s, and was the unofficial leader of the Wild Bunch--a gang of hell-raising ranch hands named for their rowdy, trigger-happy visits to local bars. Butch led the Wild Bunch on the longest series of successful robberies in the history of the Old West, making use of well-planned attacks, attention to detail--like cutting all the telegraph wires along their escape routes--skilled horsemanship, and a seemingly impenetrable hideout: Robbers Roost. Robbers Roost was so isolated, so full of hiding places, so riddled with sudden cliffs and smaller canyons, and so hard for someone who didn't know the area to move through, that the Wild Bunch was secure in their hiding spots there. They would rob a bank, or a train, and then escape into a maze that only they knew the way out of, and where fresh horses and natural springs were waiting for them. It didn't hurt the gang either that rumors existed of Robbers Roost being guarded by two hundred armed men, surrounded in land mines, stocked with an almost limitless amount of ammunition, and riddled with a hidden network of tunnels and secret fortifications. As a result of such rumors, the area being so difficult to move through, and armed outlaws being willing to defend it, the area was never successfully breached by lawmen. Butch Cassidy eventually escaped to South America, and what happened after that is uncertain, though this book suggets it's pretty likely he came back to the U.S., and lived anonymously until the 1940s, when he died as an old man somewhere in the American Northwest. Supposedly, he never even killed a man during his entire outlaw career, believing murder to be the result of poor planning, and something that drew too much attention from the law. This book does a great job of detailing Butch's character, as well as the characters of the lesser known members of his various gangs. I checked this out as a reference book, and ended up unable to put it down until I'd read it all.
Copyright © 2022 Thriftbooks.com Terms of Use | Privacy Policy | Do Not Sell My Personal Information | Accessibility Statement
ThriftBooks® and the ThriftBooks® logo are registered trademarks of Thrift Books Global, LLC