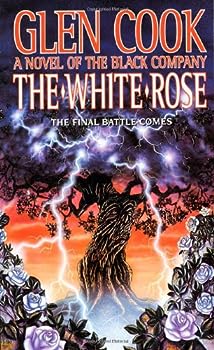 This description may be from another edition of this product. She is the last hope of good in the war against the evil sorceress known as the Lady. From a secret base on the Plains of Fear, where even the Lady hesitates to go, the Black Company, once in service...

Published by Thriftbooks.com User , 15 years ago
This is the third volume of the first of four segments of the 10 volume story of the Black Company (whew!) Unlike many long series, Glen Cook has the knack of always being just inventive enough to maintain a high level of interest without over-amping on any one volume and then running out of plot at a critical moment. The story opens on the final series of conflicts with The Empire, with The Black Company on the side of the good guys for a chance. Hidden away on The Plain of Fear, the last of The Black Company, and other supporters of Darling, The White Rose, carry out what remains of the rebellion. Life is harsh as harsh can be, and they all know that The Lady and her Taken will soon appear and try to squash them like bugs. Their only secret advantages are Darling herself, who is a Null - magic doesn't work around her - and the Plain itself a vast desert populated with a host of strange and intelligent life forms. Giant whale like creatures sail the skies, giant talking menhirs wander the dunes, stopping only to mutter "There are strangers on the Plain," and an ancient tree guards an even more ancient evil. Life is not good in the tunnels beneath the sand. And someone, somewhere, keeps sending Croaker pages from Bomanz's Diary - the self same wizard who worked the release of The Lady and The Taken, and who no lies trapped in the Barrow Lands in the tangled net that still guards the Dominator and some of his darker friends. The story continues to alternate between past and present (a favorite Glen Cook device). Gradually we realize that The Dominator is still working on escape and that something evil has worked its way free as the result of Raven's interference in the guardian spells. This time the risk is even worse than that in Shadows Linger. So dire, in fact that The Lady convinces Croaker to get her acess to The White Rose in order to work out a tactical treaty until the big threat is past. This is a Black Company novel, so if you are intuiting a serious blowout, you're right. Everyone gets into the act - rocks, whales, monsters, you name it. This is a transition volume, bringing most of the loose ends together as preparation for moving into the next phase of the story - the Black Company's ride back into its own history. Much will change, but it is one of Cook's strengths that he can work changes without breaking the reader's concentration. This is one of the few series where neither the writer nor the reader seem to get overtired.

Glen Cook at his best

Published by Thriftbooks.com User , 15 years ago
This is without a doubt Glen Cook at the top of his form. The book is original, unusual, fast-paced, and very enjoyable. The original Black Company trilogy are the best of the nine Black Company novels, and this third book is the best of the trilogy. Read the previous two books first, but definitely get this one too. You might be up all night. The tight prose on display here is easy to follow while still interesting and exciting. It makes for wonderful light reading.

End of the Books of the North

Published by Thriftbooks.com User , 20 years ago
Glen Cook's "Black Company" certainly isn't for everyone, but for those who enjoy unusual characters who are not so much "heroes" as they are the "lesser" of two evils, then this is the series for you.There are times when his writing gets a little complicated, and it can be hard to follow, but you can forgive this flaw because the story and the characters are unique and engrossing. Highly recommended for fans of noir fiction, Roger Zelazney, dark humor, or Steven Brust.You won't want to read this book if you haven't read the two previous to it. You *can*, but you won't want to -- you'll simply miss too much. This concludes the first three books in a very satisfying ending. No, these aren't "deep" books -- but they are original and refreshing. Glen Cook is a thumb to the eye of the typical square-jawed hero, and a welcome one at that!

A fabulous end to a fantastic trilogy

Published by Thriftbooks.com User , 20 years ago
The White Rose is the third volume in the opening trilogy of the "Black Company" saga. Buy this book right now. But then click on Cook's name and buy the first two volumes of the series as well: Black Company and Shadows Linger.The Black Company is one of the great creations of modern fantasy. In a genre in which most stories are starkly black and white--really pure good guys and really bad villans--the Black Company (contra its name) lives in gray. Indeed, Cook puts the following words in the mouth of Croaker (the principal viewpoint character and narrator in the early volumes): "I do not believe in evil . . . . I believe in our side and theirs, with the good and evil decided after the fact, by those who survive. Among men you seldom find the good with one standard and the shadow with another." Me too.In early novels of the series, the Black Company was toughest, nastiest, scariest outfit around. "Yea, though I walk through the Valley of the Shadow of Death, I shall fear no evil--for I am the baddest SOB in the valley!" could have been the Black Company motto. In the White Rose, their numbers have shrunk and the warriors are starting to show their age. They survive now by guile, rather than brute strength.In the White Rose, the Company also must grapple with its code of ethics, which previously was focused almost wholly inward. Honor vis-a-vis the outside world consisted of keeping one's contracts. Otherwise, honor was focused on one's relationships within the Company. But now the Company has decided that honoring its contract with Lady is not worth its collective soul. Almost against its will, the Company now finds itself serving the greater good.Many reviewers of White Rose and other Black Company novels have commented on the sparse nature of Cook's prose. In fairness, the White Rose is even sparser than most of the other novels in the series. We have almost no sense of Toadkiller Dog's appearance, motivation, attitudes, or aptitudes. Yet, in a curious way, I think of this as one of the strengths of Cook's writing. Reading Cook's novels is sort of like listening to an old-fashioned radio serial. You have to use your imagination to fill in the gaps. I suspect that my mental picture of Toadkiller Dog is a lot scarier than anything Cook would put down in print. I like that sort of novel, but your mileage may vary.

Published by Thriftbooks.com User , 23 years ago
The lack of enthusiastic reviews of this book breaks my heart. I recently spent some hours reading reviews of the "Wheel of Time" series by Robert Jordon, where almost everyone wants more action and less "sit around" character development. Well, I love the Jordon books too. But if it's action you want, start with The White Rose. You'll be sated with action, with war at its worst and best, sorcery both terrible and humorous, love that is both tender and terrifying and people and situations so real (even thought this is fantasy) that you can taste (and smell) them.When you finish. Don't despair. You can't cram all the sequels into your book-bag. Read every one. At this time, "She is the Darkness" is the latest, but don't skip any. This guy can write good... suck you right into the book and have you believing stuff that- never mind. Go for it.
Copyright © 2020 Thriftbooks.com Terms of Use | Privacy Policy | Do Not Sell My Personal Information | Accessibility Statement
ThriftBooks® and the ThriftBooks® logo are registered trademarks of Thrift Books Global, LLC