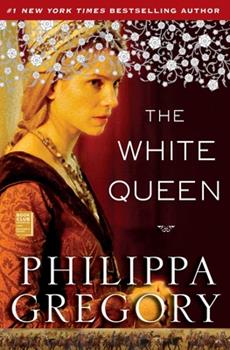 The inspiration for the critically acclaimed Starz miniseries The White Queen , #1 New York Times bestselling author Philippa Gregory brings to life the extraordinary story of Elizabeth Woodville, a woman who rises from obscurity to become Queen of England, and changes the course of history forever. Elizabeth Woodville is a woman of extraordinary beauty and ambition. Her mother is Jacquetta, also known as the mystical lady of the rivers, and she is...

This book was NOT in VERY GOOD condition

Published by Yinzerati , 1 year ago
This book has a very nasty looking cover, and is definitely not in VERY GOOD condition. I am quite disappointed.

Book is great - SHIPPING/CONDITION WAS HORRIBLE

Published by hayclan76 , 2 years ago
Purchased this as a "very good" condition book, it arrived with a torn cover, creased and damaged pages, swollen pages (either from moisture damage or water damage - uncertain) WOULD NOT RECOMMEND THIS SELLER!! Book's story - loved, it was what I was expecting and flowed well. I enjoy the author's writing style and use of history with her stories. Looking forward to the rest of the series.

Such a roller coaster of emotion!

Published by Lulu Took , 3 years ago
This book really dives into how unstable the monarchs of the time really were. Although it is fiction, and we all know the outcome of the cousins war. The author still manages to keep your attention with the uncertainty of Elizabeth's life. One of my favorites in the series.

Published by Thriftbooks.com User , 5 years ago
The television series really followed the book and I still enjoyed reading it! Looking forward to reading her other books!

Published by Thriftbooks.com User , 12 years ago
Was not expecting to enjoy this as much as her other novels but I found it utterly fascinating and now I must read around the subject ! Good read.

Published by Thriftbooks.com User , 12 years ago
THE WHITE QUEEN is Book One of 'The Cousins' War', so be forewarned on the series. That said, it's an outstanding pick for any historical fiction library, set during the wars of the Plantagenets and telling of a ambitious and lovely woman who marries a newly crowned boy king in secret and ascends to royalty. When Elizabeth fights for her family's success, her two sons become central in a mystery that continues to confound historians. A powerful story evolves.

The best Philippa Gregory yet!

Published by Thriftbooks.com User , 13 years ago
Philippa Gregory returns with a brand new series. This time, set in the less well-known Plantagenet era before the Tudors popularly known as The War of the Roses. The White Queen introduces readers to the Cousins' War through the eyes of Elizabeth Woodville, a long forgotten (and generally disliked) York queen of England. The novel begins with Elizabeth's chance meeting with the young King Edward of York, not long after his defeat of the Lancaster King Henry. Elizabeth, newly widowed, comes to Edward with a financial plea - but ends up getting more than money in return. Elizabeth manages to ensnare the young King with her remarkable beauty, and the two scandalously and secretly marry for love without the permission of any of Edward's advisers. When Elizabeth is finally presented at court as Edward's wife and the new Queen, the plotting and intrigue begins. Elizabeth, with the help of her Burgundy-born mother, grows from a simple and somewhat naive young woman into a masterful political plotter to navigate the wild English court. Elizabeth quickly moves to raise the status of her family through marriages and alliances while building support for King Edward's claim to the throne - but it isn't long until the old Lancaster threat returns. Gregory's new series is a breath of fresh air. After so many Tudor-era books (and a barrage of Tudor-related fiction all over the bookshelves and the television waves) it was refreshing to read about another fascinating, turbulent period of English history that is just as engaging (if not more) than Henry VIII's infamous marriage habits. The Plantagenet period, especially the Cousins' War (or the War of the Roses) is the perfect period to pull from, due to its near-constant warfare, betrayal, intrigue, compelling characters, and, most importantly, collection of fascinating mysteries that have never quite been solved. Gregory admits in her Author's Note that The White Queen has the most fiction of all her novels so far, primarily because the period has scant information available, but this seems to do the novel more of a service than a disservice. Gregory perfectly infuses history with fiction - there's enough history to make the story believable and even educational, but enough fiction to keep readers flipping pages with engaging characters (especially Elizabeth) that are complex and powerful. I especially enjoyed Gregory's take on the mystery surrounding the two princes who disappeared while being kept in the Tower of London. She seamlessly integrates historical fact with fictional speculation in a way that is both logical and intriguing. The White Queen even includes depictions of battle scenes, some violent. While, I admit, Gregory broke the first-person viewpoint in order to write these scenes with little explanation, this can be overlooked due to the realistic and impeccable quality of the scenes themselves. Gregory's depiction of war is flawless, easy to understand, and adds a new dimension to her writin

Published by Thriftbooks.com User , 13 years ago
I never knew much about the Wars of the Roses until I picked up The White Queen, so please keep in mind that I am definitely not an expert on the period. Having said that, I found the narrator easy to relate to and the story well plotted and easy to follow. The novel begins when the widowed Elizabeth captures the new king's eye and manages - despite many, many setbacks - to marry him. Once the marriage is announced, Elizabeth is allowed to bring her family and cousins to court, as it now becomes prudent to surround herself with trusted friends. Unfortunately for Elizabeth, the palace becomes filled with intrigue and enemies. Births, deaths, and many battles follow. I am really looking forward to Gregory's next book, as I enjoyed learning about the period through a narrator who was interesting as well as bold.

Ms. Gregory is Back!

Published by Thriftbooks.com User , 13 years ago
I have been anxiously awaiting the new Philippa Gregory book THE WHITE QUEEN. Like many, I enjoyed THE OTHER BOLEYN GIRL; however, I didn't exactly love the last book that I read by Ms. Gregory. I was sincerely hoping that THE WHITE QUEEN would love up to all its advance billing. After reading it (or you could say devouring it), I am so excited to say that Ms. Gregory is back. I loved THE WHITE QUEEN! THE WHITE QUEEN is the first book in The Cousins' War Series. You can't see me, but I'm doing a little happy dance because that means there will be two more books about the Plantagenets -- THE RED QUEEN and THE WHITE PRINCESS. I am already excited about the release of the next book because I felt as if I was kind of left hanging at the end of THE WHITE QUEEN. I don't mean that in a negative way and I'm sure it was the author's intent, but I want to know what happens next! While I definitely enjoy historical fiction, I am sadly lacking in knowledge about England and its Monarchy. As a result, I knew almost nothing about the Plantagenets except for a few small things that appeared as side stories in other novels. I can't tell you how much of this story is fact versus fiction; and frankly, I don't even care. I was fascinated by the story Ms. Gregory told about these characters' lives. THE WHITE QUEEN is better than any televised drama or movie I've ever seen. These characters are smart, determined, and ruthless; and I just loved reading about them. I thought THE WHITE QUEEN had a little bit of everything; and I'm sure there is something in Elizabeth Woodville' s story that will capture your attention. First, THE WHITE QUEEN is just a fabulous historical story about the Cousins' War. There are so many scenes where brother is pitted against brother for control; and the characters involved have absolutely no idea who they can and can not trust. It was a great, suspenseful ride for the reader too! I also thoroughly enjoyed how Ms. Gregory used facts to tell the story while also embellishing the mysteries and holes in the characters' lives to make a very readable story. I realize that Ms. Gregory picked some fascinating people to write about, but a whole lot of credit goes to her for being such an amazing storyteller. Another part of this story that will keep many readers entertained is the magical and sorcery elements. Elizabeth is said to be the descendant of a mythical water creature called Melusina. Ms. Gregory incorporated the myth of Melusina into the novel and actually used it as a recurring theme/symbol throughout the story. In addition, Elizabeth's mother practiced some examples witchcraft. Some people actually claimed that Elizabeth's mother put a spell on Edward to make him fall in love with her daughter. The character of Elizabeth also had premonitions about certain things and places in her life. She always had a bad feeling that something awful would occur in the Black Tower. One of my favorite elements of the THE WHITE QUEEN was the love
Trustpilot
Copyright © 2022 Thriftbooks.com Terms of Use | Privacy Policy | Do Not Sell or Share My Personal Information | Accessibility Statement
ThriftBooks® and the ThriftBooks® logo are registered trademarks of Thrift Books Global, LLC