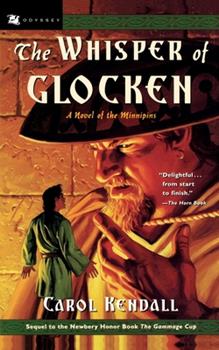 The Whisper of Glocken

(Book #2 in the The Minnipins Series)

Carol Kendall's witty, epic tales about the race of people called the Minnipins are now available as Odyssey/Harcourt Young Classics. Now a new generation of readers can thrill to the adventures of the tiny folk who become mighty heroes. The original interior illustrations by Erik Blegvad and Imero Gobbato have been retained, but vibrant new cover art by beloved illustrators Tim and Greg Hildebrandt gives the books a new look for a new audience.

Published by Thriftbooks.com User , 22 years ago
This is adventure book. If you haven't read "The Gammage Cup" then read that one first. If you have read the first book in the series then please take careful note that the main characters of the last book aren't the main one's here. You are introduced to completely new characters but at least the old characters are still in the book. It is filled with excitement and adventure and I guarentee you will love it.

Published by Thriftbooks.com User , 22 years ago
I think that the fantasy book, The Whisper of Glocken, was a good book because it had a nice, adventurous atmoshpere. There were a veriety of diffrent character personalities. This book is a nice end to the two books in the Minnipins series. One of the nice things about this book was that all of the characters had a savior-part, so you take part in each of their piont of views. I also enjoyed the diffrent creatures Kendall has sprouted from her imagination. The Diggers, egg-shaped plants and many others show what a brilliant imagination Kendall has. I suggest this book for ages 7 & up. I should think that it would be a classic amoung fantasy lovers.

An enjoyable successor to "The Gammage Cup"

Published by Thriftbooks.com User , 23 years ago
While I felt "The Gammage Cup" was a far better book than its sequel, I nevertheless enjoyed finding "The Whisper of Glocken" lurking on a library shelf. The Minnipins' world is a colorful, well-detailed world to visit, and there's no shortage of eccentric characters. The main theme of the story is not as clear here: where "The Gammage Cup" had a clear message about the value of retaining one's individuality in the face of stultifying tradition, "The Whisper of Glocken" is less focused. The theme of the story seems to be, however, what exactly is the nature of heroism? What constitutes a hero? And who decides whether one has achieved hero status or not?Glocken, the idealistic bell-ringer for the village of Water Gap, spends his days reading and dreaming of the glorious exploits of the five Outlaw-Heroes of Slipper-on-the-Water (familiar to readers of "The Gammage Cup" as the eccentric Muggles, Mingy, Curley Green, Gummy, and Walter the Earl) while he waits for the chance to prove himself a hero. When disaster does come to the Land Between the Mountains, in the form of a strange flooding that causes the Watercress River to reverse direction, Glocken finds himself sent off on a quest to restore the river's natural flow, along with a jumble of quirky characters: Scumble the timid sluice-keeper, self-righteous Gam Lutie, reclusive Crustabread, and warmhearted Silky--by no means hero material in Glocken's judgemental eyes. On his part, he is determined to prove himself a worthy successor to the Outlaw-Heroes, even if he has to share his quest with these misfits. Heroism turns out to be more painful, confusing--and downright hard to recognize when it shows up--than Glocken reckons. Nor are the Outlaw-Heroes what he expects when he finally reaches Slipper-on-the-Water: the exotic Curley Green is sweet but flutterheaded, Mingy the Fearless is a world-class grouch; Muggles the Wise is disorganized and thinks in proverbs. Yet over the course of the book, Glocken's oddly-assorted companions prove themselves to be as resourceful, strong-hearted, and thoroughly eccentric as their predecessors the Outlaw-Heroes. Even Glocken, disillusioned by his meeting with the living legends, rises to the challenge in retrieving the long-lost Whisper of Glocken (a mysterious bell that once belonged to Glocken's ancestor of the same name, lost when the Minnipins left the Land Outside to settle the Watercress) and restoring the river's course. While "The Whisper of Glocken" does not match the depth and brilliance of "The Gammage Cup", it is nonethless a good read and a welcome return to the Minnipins' world. Especially enjoyable are Glocken's first impressions of "The Gammage Cup"'s main characters--he doesn't recognize his heroes when he meets them--and the strange world Glocken encounters in the Land Beyond the Mountains. All the main characters have their own particular quirks, whether it's the way Scumble always smells of fish
Trustpilot
Copyright © 2022 Thriftbooks.com Terms of Use | Privacy Policy | Do Not Sell My Personal Information | Accessibility Statement
ThriftBooks® and the ThriftBooks® logo are registered trademarks of Thrift Books Global, LLC