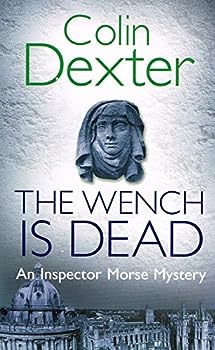 The Wench Is Dead (Inspector Morse, #8)

(Book #8 in the Inspector Morse Series)

This description may be from another edition of this product. It is only to entertain himself in the hospital that the impatient Inspector Morse opens the little book called Murder on the Oxford Canal. But so fascinating is the story it tells--of the notorious...

The Real Story of the Oxford Canalboat Murder

Published by Thriftbooks.com User , 12 years ago
A decrepit Victorian canalboat staffed by drunken louts... An impoverished, mercurial young woman traveling across England to meet up with her husband and begin a new life... The brutal homicide of this same woman in the dark of night... The recovery of her body in a canal outside Oxford, and the morbid discovery that she has been raped, beaten, intentionally drowned... About a decade ago I saw this impressively moody tale on PBS's Mystery! and thought it was a great story with a gigantic twist ending, so I resolved that one day I'd read the novel on which the superb plot was based. On a mundane Saturday last year "one day" came. Trouble is, as has often been the case through the years, reading the original novel behind the TV series handed me a letdown. Colin Dexter's idea of the truth behind a sensational nineteenth-century murder trial and how Morse arrives at that truth are every bit as wow-inducing in written form as they were on the small screen, the trouble is eighty-percent of this sloooow-moving book seemed to step away from the case at hand and concern itself with Morse's hospital stay and the unglamorous hows and whys of medical procedures best left to the imagination. Flashing back to the mid-1800's but set in 1980's Britain where the bedridden Morse's sudden fascination with the murder of a canalboat passenger provides a distraction during an unwelcome confinement, The Wench Is Dead tells of the trial of the once-famous murder victim's alleged killers, and the hanging of two of the three men convicted of the crime. Dexter's book sees the past drudged up and laid bare, takes Morse across sites barely remembered in dusty history books, and finally concludes with a disinterment inside a moss-shrouded Irish graveyard. All of this is undertaken in Morse's quest to get to the facts of what was once, long ago, the most headline-making killing in the land. Not a bad book but greatly inferior to its televised version. Be forewarned The Wench Is Dead is deliberate, meandering, and occasionally frustrating, but Mr. Dexter has fashioned one of the most imaginative surprise endings of any book I've ever read: and shame on anybody who gives that satisfying ending away!

Couldn't put it down, even though I'd seen the TV version!

Published by Thriftbooks.com User , 17 years ago
I bought and read this book to study Dexter's style, even though I'd seen the TV adaptation of this same story. I'd anticipated that I probably wouldn't read the whole book through, since I already knew the basic plot. However, I was so fascinated by the way in which Dexter weaves his story that I simply couldn't put it down! As someone who aspires to write fiction that spans multiple time periods, I was intrigued by the way in which Dexter contrives to have his present-day protagonist solve a nineteenth century crime. Some of the plot developments are perhaps a little optimistic, but it is fiction, after all! Dexter demonstrated with this novel that he could conjure up not only an authentic England of the late twentieth century, but also that of earlier times (and I say that as an expatriate Englishman). Certain of Dexter's writing preferences might not pass muster in amateur "Creative Writing" circles in the US: so I wonder who knows best?! I agree with the reviewer who complained about the weak title, but nobody should allow that minor issue to deter them from this riveting mystery.

Published by Thriftbooks.com User , 21 years ago
This novel demonstrates well what a wonderful wordsmith this author is. This is a superbly and imaginatively plotted work. Morse again is at his irritating worst but while his body is showing the signs of neglect his masterful mind is still at work trying to solve a compelling mystery of the previous century.This author is one of the genre's leaders.

Published by Thriftbooks.com User , 21 years ago
I've enjoy most of the Inspector Morse series since I was first introduced to the character on a PBS mystery series. The author is a master craftsman who can out-Christie Christie when it comes to plot twists that still follow the "rules," and this book was no exception. I particularly enjoyed it because it involves a bit of history--one of my favorite persuits--and embroils the ailing Inspector in a mind game that brings to resolution a crime committed decades before his birth. A consumate juggler of details, Dexter is a master at plausable solutions, always providing at least two. He delightfully misleads his inspector and his readers with a trail of clues and interpretations that seem entirely probable only to delight his followers with a "true" solution which fits the facts with even greater plausibility. My only complaint with respect to the series is that I become impatient with Morse's alchoholism and untreated depression. As a nurse I keep wanting to urge him to get proper treatment! On the whole I find his seargeant a much more balanced and satisfying character.

Inspector Morse does it again!

Published by Thriftbooks.com User , 24 years ago
An unfortunate title for a book, as I would have never read it, had it not been for another murder mystery by Colin Dexter, to be solved by the infamous Inspector Morse. But after reading the book, the meaning of the title become clear. However, I'm not sure how many readers would buy a book with this title, which conjures images of a bad B-movie. Inspector Morse is true to form, albeit lying in a hospital bed with an ulcer. From his hospital bed, Morse manages to re-solve a murder case that occurred in the late 1800s. This case is brought to his attention through a book a fellow patient in the ward had written. Dexter has chosen a very interesting plot construction for this mystery. The story is more intriguing than gripping, but makes for entertaining reading. Morse's intuitive and investigative abilities are shown at their best, with Sargent Lewis piping in at opportune moments. Basically another solid murder mystery in the Inspector Morse series!
Copyright © 2020 Thriftbooks.com Terms of Use | Privacy Policy | Do Not Sell My Personal Information | Accessibility Statement
ThriftBooks® and the ThriftBooks® logo are registered trademarks of Thrift Books Global, LLC