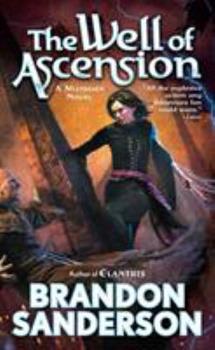 The Well of Ascension

From #1 New York Times bestselling author Brandon Sanderson, the Mistborn series is a heist story of political intrigue and magical, martial-arts action. The impossible has been accomplished. The Lord Ruler -- the man who claimed to be god incarnate and brutally ruled the world for a thousand years -- has been vanquished. But Kelsier, the hero who masterminded that triumph, is dead too, and now the awesome task of building a new world has been left...

Despite lackluster love story, a can't-miss for fantasy lovers

Published by Thriftbooks.com User , 13 years ago
The second book in the Final Empire series starts up a while after Vin defeats the Lord Ruler. Elend Venture has taken over as king of Luthadel, trying to establish a modern, more enlightened type of government, including a Congress-like Assembly made up of merchants, skaa and noblemen. Vin acts as Elend's bodyguard, protecting him from several assassination attempts by kings who have taken over other sections of the Final Empire after the Lord Ruler's demise. But all is not good. Two armies have set up camp outside of Luthadel, Elend's father leading one and an influential politician from the West leading the other, and a siege has begun. Everyone is hoping to get their hands on The Lord Ruler's secret stash of alium; unfortunately, Elend and the remaining members of Kelsier's crew have not located it. To make matters worse, Sazed, who has been traveling to spread his knowledge now that The Keepers no longer have to live in hiding, has heard accounts of the mist killing people. The mist also seems to be staying around longer and longer into the day. Prophesy comes back into play, and a strange mist-creature and a faraway pulsing beat begins to haunt Vin. It seems that the Lord Ruler's dying words--that he was preventing some great evil from taking over the world--might have been true after all. Again, one main problem with this novel--the characters are again a bit clichéd, but in this book it gets slightly worse with a drawn-out "drama" between Vin and Elend where they can't seem to communicate to each other and misunderstandings take place and love is thwarted and blah blah blah. That is not a plot line I ever enjoy in books, I just find it old-hat, annoying and laaaaame. I thought it was completely distracting in this book and unnecessary and I wish Sanderson had left it out. I feel like one fault of his is his inability to make engaging love stories. I can't even put my finger on why exactly, I just don't really find myself caring about Vin getting with Elend or Sazed and his interest or Ham and his macguffin wife. Like, with Vin and Elend I can get why they would love each other, I just don't "feel" it--you know? I don't know, they're no FitzChivalry and Molly, I'll say that much. That said, the Vin/Elend drama is an extremely minor aspect to the overall book, which is just as fast-moving and otherwise creative as the first. The plot twists, for me, were also equally surprising as they were in the first book, and the mysteries remained mysterious until the book wanted them revealed. I am unbelievably excited for the third book. Like the first, this book has a quasi-satisfying ending , but the overarching story line is still up in the air. Cannot wait for October!

Published by Thriftbooks.com User , 13 years ago
This 2nd book in the series from Brandon Sanderson is, like the first, awesome. I had heard about this author only because of the death of a very famous author and Brandon is going to finish this other authors last book in a very long series. Brandon, if he continues to write like he has done in these two books, will be and already is, one of the premier authors in this Genre. Robert Jordan would be proud!

Published by Thriftbooks.com User , 13 years ago
This book is great in it's complexity. Keeps you guessing all through to the end, and even after. The characters feel more real than most in books of this genre. I can't wait for book 3!

Unable to put down after page 1!

Published by Thriftbooks.com User , 13 years ago
I read this entire book in 36 hours! I thouroughly enjoyed Mistborn#1. This book is an even better read. I highly recommend this book with all due haste. This book was as solid as a single story book as any I have read. He has mastered telling a story Plot in one book, even though the series may be headed for multiple books. The plots in the past two books have started with a goal/problem, and by the end of the book they get resolved/fixed etc. I think it is a shame that emerging authors have a weak way of connecting with the mass market. I will honestly say that I would have maybe never read any of his books, if it were not for Harriet "tapping" him as the author to finish the Wheel of Time's final book. I wanted to read Brandon's book to get a "measuring stick" of his writing style. He is unequivocally capable of holding his own with the "big boys" of Epic Fantasy. Look out Martin, Goodkind, Weis & Hickman, you have a young buc on the scene that will BE a force in this genre. On his webpage is an Ebook that is in beta... Yea tech-term-style beta. You can read the story now even though it has not been officially published. I think it is on edit 4 or 5 OF 12 with TOR. Sanderson you have a life time reader.

Published by Thriftbooks.com User , 13 years ago
This book is excellent fantasy, with new ideas and well-written, a really different world. It seems to me that much of the fantasy genre has turned to horror in the last few years and many books seem to have too many sado-masochistic overtones. It is true, as one reviewer stated, that there is not much passion in Vin and Eland's relationship but the characters are well-drawn and very real. I can't wait for October so I can read the last book.
Copyright © 2020 Thriftbooks.com Terms of Use | Privacy Policy | Do Not Sell My Personal Information | Accessibility Statement
ThriftBooks® and the ThriftBooks® logo are registered trademarks of Thrift Books Global, LLC