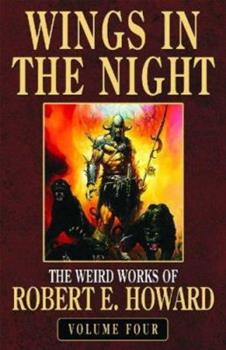 (Book #4 in the The Weird Works Of Robert E. Howard Series)

Wings in the Night collects Robert E. Howard's fiction and prose published in Weird Tales Magazine from July 1932 to May 1933. These works represent literary stepping-stones to Howard's infamous Cthulhu mythos stories and his most famous character of all -- Conan the Cimmerian -- and ably demonstrate that each of Howard's stories improved and added to his formidable skills as a master of fantasy and adventure.

Published by Thriftbooks.com User , 14 years ago
This volume is a little different, inasmuch as it contains almost all stories about Howard's super warriors, Kane, Kull and Conan, apart from the Cairn on the Headland, which you could call a story about a reincarnated warrior of that ilk, if you like. Weird Works 4 : Wings in the Night - Robert E. Howard Weird Works 4 : Worms of the Earth - Robert E. Howard Weird Works 4 : The Phoenix on the Sword - Robert E. Howard Weird Works 4 : Scarlet Citidel - Robert E. Howard Weird Works 4 : Cairn on the Headland - Robert E. Howard Weird Works 4 : Tower of the Elephant - Robert E. Howard Solomon Kane is deep in cannibal country, when he comes across even worse. Flying man-beasts that are too many for him to fight, and he is overcome. When he wakens, he realises he is alive, even though he should not be, and is told of the akaanas, or flying-men, and realizes they may be the source of the Mediterranean harpy legend. Kane has an advantage against them the others do not, he has firearms, and the staff of N'Longa. He sets out to deal with this menace methodically. 3.5 out of 5 One of Bran Mak Morn's subjects is being crucified while he is visiting some Roman commanders. This does not sit well with him or his aide, as he feels the punishment does not fit the crime, and the Romans are making a joke of doing what they will with the barbarians. Bran has a plan for revenge on the Roman who gave the order, but Gonar cautions him against using mystic means. Bran ignores here, and seeks the Black Stone with the help of a were-woman. What he unleashes is a lot more than he bargained for. 4 out of 5 King Conan is bored. Politics and statecraft and maps, and all that stuff. In a dream, a man magically enhances his sword, and that certainly comes in handy later when the odd traitor and demon relieves the tedium of the ruling class. 4 out of 5 King Conan's army of Aquilonians has been smashed by a far superior force, led by a wizard. Conan refuses to sign over his kingdom, and the wizard throws him in a dungeon. He escapes an assassin and a monster, and rescues a wizardly rival that Tsotha had imprisoned. This wizard, please, summons a flying steed to bear Conan back to his kingdom, to take revenge. 4.5 out of 5 Another reincarnation type horror, with a Norse flavor. Nice to be given necessary supernatural artifacts via the reapparance of centuries dead ancestors, when that happens, that is for sure. 3.5 out of 5 Conan is in thieving mode here. In a tavern, he is asking the assembled crowd of nogoodniks why no-one has stolen a famous jewel from this tower. They tell him because it is guarded by some very nasty things. He, of course, investigates, and meets a master thief attempting the same thing. Humans, animals, a giant spider and a wizard are to be encountered, not to mention an alien. 3.5 out of 5
Copyright © 2022 Thriftbooks.com Terms of Use | Privacy Policy | Do Not Sell My Personal Information | Accessibility Statement
ThriftBooks® and the ThriftBooks® logo are registered trademarks of Thrift Books Global, LLC