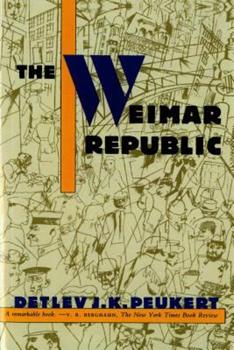 The nature of Weimar's terminal crisis - how a politically liberal and culturally progressive society could succomb to fascism - remains one of the central historical questions of our century. In this major work, Detlev J.K. Peukert offers a stimulating interpretation that not only places Weimar in the history of twentieth-century Germany but also reveals it as an archetype of the ambivalences and pathologies of advanced industrial society.

Published by Thriftbooks.com User , 12 years ago
Detlev Peukert was a professor of modern history at the University of Essen. This book covers the history from the failed revolts of 1918 to the Enabling Act of 1933. The important dates are in the `Chronology' on pages 282 to 289. The defeat in WW I ended the monarchy but left the aristocracy (big landowners) and corporate owners in power. The Social Democrats, Liberals (middle class) and the Catholic Center Party contended for control of Germany. The government was influenced by the aristocracy and against ordinary workers and people, and the splinter parties. The former ruling class enabled the Nazis to gain power legally (p.280). The hyperinflation was a way to impoverish people who did not own productive property but only paper wealth. This hardship caused suicide rates to soar. The aristocracy used the Freikorps, SA, and the NSDAP to suppress popular political parties. The military defeat of Germany caused the Kaiser to abdicate and Ludendorff to resign. A civilian government took power (p.28). The Social Democrats did not introduce democratic reforms or purge the aristocratic officer class (p.30); they did call for new elections and a new constitution (p.31). Armed groups moved against protesting workers (p.32). The Weimar Coalition was in power (p.33), it relied on the military and bureaucracy (p.34). Did proportional representation contribute to the collapse of the Republic (p.38)? The emergency powers of Article 48 gave the President sovereign authority (p.39). Listing basic rights did not deliver them (p.41). The Versailles Treaty is explained as the result of Germany's defeat (pp.42-46). The real problems were the existence of anti-republican elites in government and the army, and the loss of republican sentiments among the middle class (p.50). Chapter 3 discusses the Post-War Crisis. Since the Allies were in debt to America they needed reparations from Germany (p.53). France wanted to split up Germany (as it had been prior to 1866) [this probably would have prevented WW II] (p.57). Inflation was caused by the German government that printed paper money instead of raising taxes to pay for the war (pp.62-64). One problem was the counter-revolution and the anti-republican reaction it fostered. The Freikorps and other groups eventually led to the victory of the NSDAP. The Kapp putsch was defeated by a General Strike (p.69). Part II begins by saying this history is not purely chronological, and we get essays on demographics (Chapter 4). Trade Unions had a right to partake in decisions affecting employees (Chapter 5). But `rationalization' created higher unemployment (p.117) with political consequences. The Big Corporations decided to attack parliamentary government (p.126). The "science" of eugenics was thought to create a perfect society (p.139). Part IV describes foreign policy and domestic politics. Inflation and falling prices for agriculture created dissatisfaction (p.234). The World Economic Crisis hit Germany hard (because of the

An excellent, well-written, informative book for layman or professional

Published by Thriftbooks.com User , 14 years ago
I completely disagree. with galwaygirl's review I am just an amateur student of history, with no considerable prior knowledge of this period or Germany in general, and I found Peukert's book very understandable, concise and informative. Yes, it is dense, as any detailed history book has to be to do justice to its subject. As a reader, I did find I had to stop periodically and work to consolidated my thoughts to retain comprehension, but of course that's to be expected. Bottom line, I learned alot, and did not lose patience with the writing, and I am not the most patient fellow on earth. Also, it is correct that this book focuses alot on social-economic conditions, but its discussion of politics is by no means destitute. Perhaps the reviewer meant that Peukert doesn't discuss personal politics and party politics in minutia, which is true, but the discussion of general political trends, their causes and effects is excellent.

Concise, Precise and free of Jargon

Published by Thriftbooks.com User , 21 years ago
I'm doing some research into the years immediately prior to WW2 and needed a good recap of Weimar for context. This book was superb for the purpose. Not long after starting it I concluded that I might as well save my yellow hi-lighter and simply dip the whole book in florescent yellow ink. There is hardly a page that is not a superbly concise rendering of an important point. Peukert, who died at age 39, was a star of German history of the 20th century, and this book, intended as both a primer and a summary, shows why. Excellent grasp and presentation of both statistics and economics. Few if any hacknied answers to banal questions, but rather a probing for new questions as well as new answers. A willingness to say "I don't know" when that is the proper thing to say. Peukert's intellectual honesty shines through, and all his traits inspire confidence. This book is not, however, a delightful read, being so thoroughly boiled-down to its essence. It contains very little in the way of flowing narrative, witty vignette, or deft portraiture -- mostly it sticks pretty close to what might, with a wink and a nod, be called the "objective facts" of Weimar. It is nonetheless well written, crammed with information, and free of jargon (this last point not to be taken for granted in academic writing of the 70s and 80s) -- and apparently well-translated. A very good job of what it sets out to do. That said, I got very little in the way of the "flavors" of Weimar from it, and now feel the need to read something else for that -- perhaps Doblin's "Berlin Alexanderplatz" will provide that.

Published by Thriftbooks.com User , 21 years ago
A masterly translation of a remarkable book! The radical shifts of Peukert's thought are lucidly rendered in an English as limpid as it is urgent.

Published by Thriftbooks.com User , 21 years ago
Detlev Peukert's analysis of Weimar Germany exceeds any other in breadth and readability. His book not only examines the experiment of Weimar democracy from social, economic, political, and cultural angles, but provides an interesting thesis for why Weimar democracy failed, namely that Weimar Germany epitomized the crisis of classical modernity. I have read many books on Weimar Germany, most of which focus on one particular aspect. Peukert synthesizes all of the most important aspects into one, offering a clear account of why Hitler happened.
Trustpilot
Copyright © 2022 Thriftbooks.com Terms of Use | Privacy Policy | Do Not Sell or Share My Personal Information | Accessibility Statement
ThriftBooks® and the ThriftBooks® logo are registered trademarks of Thrift Books Global, LLC