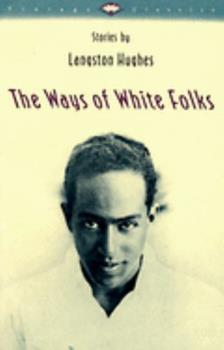 The Ways of White Folks

A collection of vibrant and incisive short stories depicting the sometimes humorous, but more often tragic interactions between Black people and white people in America in the 1920s and '30s. One of the most important writers to emerge from the Harlem Renaissance, Langston Hughes is best known as a poet, but these stories showcase his talent as a lively storyteller. His work blends elements of blues and jazz, speech and song, into a triumphant and...

Published by Texas Deana , 2 years ago
Thought provoking. And yet humorous view of how white folks have their own viewpoint.

Published by Thriftbooks.com User , 17 years ago
How can an author say so much within the confines of so few pages? Within the parameters of several different stories that paint a much larger portrait? While these stories were written in the 1930s, and one could argue that things have gotten better because of the Civil Rights Movement, this series of short stories depicts some undeniable facts through the vignettes presented in "The Ways of White Folks". The portraits are stark; the characterizations of cruelties, slights, the numerous examples of sheer ignorance are presented in unvarnished terms. Whether it's the couple who consider themselves to be enlightened enough to collect Negro art and invite Negroes to their home or the outwardly charitable family who raise the "Poor Little Black Fellow" or the vicious cruelty of the man who sires a child and runs away in stark terror when, a year or so later, he sees the baby who bears his own red hair, Langston Hughes knows exactly how to pack an exquisite, well delivered punch straight to the gut! Two of the vignettes are particularly poignant. One is a letter from a son thanking his mother for not hailing him and showing him any recognition on a public street. His was the good fortune to be born light enough "to pass". He has used that pass to a better life, a white girlfriend, a good job and, of course, he would lose that if his horrid secret were revealed! Imagine the heart of a mother who would receive such a letter. The message is clear, "I need to deny you so that I can have a life." And the letter goes on tell about his white father, with a white family of his own, who would never claim any of his mulatto offspring. The last story reaches a crescendo in a series that clearly depicts not only the slights but also the cruelties and brutalities that occurred when Negroes were owned. "Father and Son" tells an often-repeated tale of a man who has lived two lives, one the life of prosperity and propriety with a white wife. The second life is one where he magnanimously allows his black mistress/servant and mother of his illegitimate children to live in the big house (but that didn't include their children). Further proof of his magnanimity is the fact that these offspring were allowed schooling, where some of their white counterparts were not even allowed to have an education. The Colonel's illegitimate children are even allowed higher education, if they can handle it. One son, Bert, is smart, quick, daring and light skinned. He reminds the Colonel, his father, too much of himself in the Colonel's youth. The physical resemblance and personality similarities between father and son are too obvious. Bert's cowers to no man and will not be treated as a nigger...and says so publicly. His daring, where previously bringing him relatively little personal harm because the Colonel would back down, ends catastrophically. Langston Hughes is a masterful, engrossing, captivating writer and the portrait of some white folks is shameful. Do w

Published by Thriftbooks.com User , 19 years ago
Before reading this book of short stories, I knew practically nothing about Hughes, other than that he was famous for being one of the first black American writers to develop a style of writing which directly reflected the uniqueness of the Afro-American experience. Reading this collection, however, introduced me for the first time to the mind of a truly great observer, thinker, and communicator. Hughes achieved something which is very important in the now overly politicized climate of race: he documented not only the confounding and hostile conditions which blacks had to endure in the early 20th century, but he understood the white culture as well. Through the eyes of the shrewd and empathetic Hughes, these stories read not so much as indictments of white racism as they do as the clashes of two dramatically different cultures. To be sure, Hughes does not pull any punches when describing the hostility, condescension, and apathy of whites towards blacks during the Great Depression. These stories are glimpses into a world when overt racism was not only condoned, it was institutionalized as part of the American fabric. But despite the awful conditions for black people at the time, I never got the sense that Hughes was writing to express any personal rage or contempt for white people. He seems to present each heartbreaking scenario as an absurd juxtaposition between two disparate cultures. Instead of taking the easy road by presenting whites as evil, he makes them out to be a paranoid, anal retentive, soulless lot who don't know how to enjoy themselves. Unlike many contemporary discussions of race which tend to oversimplify the complex problems we face, Hughes's stories paint the clash between blacks and whites with deep humanity, empathy, nuance, and even humor. Stylistically, he certainly belongs to the canon of outstanding 20th century American writers, black and white. He was no mere experimentalist (as I had previously thought), but rather a well schooled craftsman who did his homework first, and then did his own thing with it. But aside from all my amateur literary criticm, I would like to mention that I simply could not put this book down. These stories are a gift!

Published by Thriftbooks.com User , 21 years ago
This was my first reading of Langston Hughes and I thoroughly enjoyed it. I had to read one story for class and read the whole book in a day. His way of story telling is something to be shared with your children. He made me feel like I was there through his descriptive writing style. I recommend that parents share his books with their children...let them see what life truly is.

the best of Hughes' prose

Published by Thriftbooks.com User , 22 years ago
I've been teaching the stories from this book at Houston Community College for about five years now and every semester my students affirm for me what I first thought of these stories when I read them a decade ago: they are revealing without being trite, moralistic without being didactic, and sentimental without becoming cliche. "Cora Unashamed" and the tiny "Passing" must be the finest short stories of the Harlem Renaissance. Buy this book. It is not for scholars or students only!

Published by Thriftbooks.com User , 22 years ago
Hughes really understood the condition of human nature, as he demonstrated in this bittersweet collection of interracial tales. Racial clashes in america are often masked over or outwardly denied; in this collection they are thoroughly and unromantically exposed. Hughes is best known as a poet, but is also a prose stylist extraordinaire
Trustpilot
Copyright © 2022 Thriftbooks.com Terms of Use | Privacy Policy | Do Not Sell My Personal Information | Accessibility Statement
ThriftBooks® and the ThriftBooks® logo are registered trademarks of Thrift Books Global, LLC