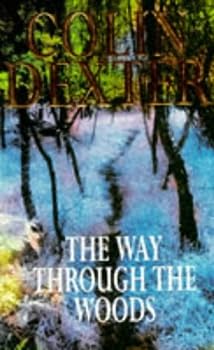 The Way Through the Woods

(Book #10 in the Inspector Morse Series)

This description may be from another edition of this product. "Cunning...Your imagination will be frenetically flapping its wings until the very last chapter." THE WASHINGTON POST BOOK WORLD Morse is enjoying a rare if unsatisfying holiday in Dorset when the...

one of mystery's great curmudgeons

Published by Thriftbooks.com User , 21 years ago
The history of the mystery is replete with examples of detectives who tread a fine line between the amusingly eccentric and the downright boorish (Sherlock Holmes being the archetype; Poirot, Nero Wolfe, and others following in his footsteps). Colin Dexter's Inspector Morse fits squarely and delightfully in this tradition. If you've never seen the TV series on PBS and A & E, or better yet read one of the books, you're really missing out on something special. Morse, whose first name wasn't revealed for years, is an Oxford-educated, beer-drinking, Opera-loving, vintage Jaguar-driving, Crossword puzzle maven and also one of the biggest curmudgeons in all of literature. He does not suffer fools gladly, other than his much put upon but continually bemused partner Lewis. His superiors are forced to tolerate his idiosyncrasies and his bibliousness because he also has a uniquely intuitive mind and a knack for solving the most puzzling crimes. In an interesting symbiosis, John Thaw's television portrayal of Morse bled over into the novels and took some of the harsher edges off of the character and Kevin Whatley's Lewis helped to make the character less of a dolt and more of a naïf in the books too. In this Gold Dagger winning installment in the series, Morse is on an unwelcome holiday when he gets drawn into the case of a year old disappearance of a Swedish girl who is assumed to have been murdered and ditched in the local woods. The largely moribund investigation is reinvigorated when The Times receives a cryptic letter with tantalizing but ambiguous literary clues to the dead girl's whereabouts. As the story unfolds Morse finds himself in the midst of a murder investigation that includes everything from pornography to ornithology. As always, the book offers both a satisfying mystery and the great pleasure of watching Morse and Lewis interact with one another and with suspects, superiors and the various ladies who inevitably tweak Morse's heartstrings. After a highly successful run of 13 novels, Dexter killed Morse off earlier this year in The Remorseful Day. On the one hand, it's nice to see an author finish a series while he still has his fastball, but Morse and Lewis will be missed. Try one of the books and keep an eye peeled for the show, both are outstanding. GRADE: A+

Well worth the read!

Published by Thriftbooks.com User , 22 years ago
A very well crafted book. Superb plotting as one would expect from this author. This book continues the Morse mystique (he is still able to attract women half his age) but gives Lewis a little more assertiveness. Quite unputdownable.

Published by Thriftbooks.com User , 23 years ago
Better than anything else I ever read! A must for all crimenovel addicts. And I know because I read crimenovels every day.

Published by Thriftbooks.com User , 24 years ago
Inspector Morse is already like an old friend-my first Morse book, but I'm sure the rest will follow! He interested and intrigued me. The weaving of characters and events was flawless! Thank you, Mr. Dexter!

Published by Thriftbooks.com User , 24 years ago
For those of you who are only familiar with Colin Dexter's character of Chief Inspector Morse through the A & E mysteries series, I say unto you READ THE BOOKS. Colin Dexter has created a series of mystery novels that will appeal to even the most cynical of mystery fans. Although he did not start writing until after his carreer as a University Professor, he has made up for lost time with a vengence. The character of Morse is superbly drawn. A razor sharp mind that has all the human failings common to all of us. The twists in his novels are truly diabolical and show an insight into the human condition that is both disturbing and familiar. I realize that this is a review more for the body of work that constitutes the formidable Inspector Morse, but I feel so strongly about his work and, seeing no other reviews here, felt the need to point out a very important fact: If you buy a Colin Dexter novel, you will not be disappointed.
Copyright © 2020 Thriftbooks.com Terms of Use | Privacy Policy | Do Not Sell My Personal Information | Accessibility Statement
ThriftBooks® and the ThriftBooks® logo are registered trademarks of Thrift Books Global, LLC