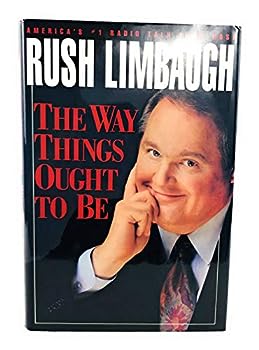 The Way Things Ought to Be

Limbaugh delivers his spirited defense of conservative values in blunt talk, with scathing wit. Includes new material on the Clinton administration, plus a teaser from Limbaugh's new hardcover, See, I Told You So, to be published in November.

Right even when not speaking in Republicanese

Published by Thriftbooks.com User , 17 years ago
Since the 80's Rush Limbaugh has pontificated from his throne at the EIB Institute on the most popular Syndicated Radio Talk show on the planet. His conservative takes on things are a refreshing antidote to the "Far Left wing" branch of Liberalism & the Democratic Party, and this 1st book is a wonderful introduction to him, his views, and a lot of truth telling you rarely found on the air when the book burst on the scene in 1992. I once was a Reagan Democrat, then became a Clinton Dem, yet still listened to Rush on the Radio. I've since voted For Bush twice, and finally have evolved into a Registered Moderate Republican. I used to joke that Rush made perfect sense when he wasn't speaking Republicanese, but, obviously, that view has changed profoundly over the years. Read this book, learn from it

It is, indeed, insightful

Published by Thriftbooks.com User , 18 years ago
I rate this book with five stars because I think it is important for people to read it, particularly those who might term themselves, 'liberal', like myself. As many reviewers have reported, the book is insightful, but in a way that many of them would disagree with (vehemently). It is an expose of the sloppy thinking and 'twisting-of-the-facts-to-support-my-worldview' that have come to dominate an ever-increasing segment of the media. There's Ann Coulter, and Fox News and all of their commentators and whordes of others in publishing, both book and periodical, TV, and, famously, talk radio. I read the book, let's see here, in about 1997. A relative gave it to me as a joke and I read it. I read and read and cringed and, presently, found myself laughing at all of its absuridity. Then I was scared, moved, and troubled. It's been a while since I read the book, but I remember reading it in bed one morning on a day off and I had one of those breakthrough realizations: I started replacing the word 'liberal' wherever it appeared and I mentally inserted the word 'Jew', et voila! Mein Kampf! I'm not saying Rush is a Nazi, now, so don't get too excited, but he definitely uses the same sort of propaganda techniques. I believe that a Master's degree in Rhetoric is waiting to be awarded (if, indeed, it hasn't already) to some thoughtful grad student who analyzes each and every logical fallacy employed in this monograph. There are multiple examples on nearly every page. The ad hominem, the Straw Man, the False Dilemma, the Slippery Slope, prejudicial language, the False Analogy. This book's got 'em all! Page after page after page of them. This book IS important. It was revolutionary, I think, in that it was the first mega-seller to employ these techniques in the modern conservative movement. Certainly, the basic premises, even the seed, of the Republican Revolution and all of what has come from that can be, to a fair degree, found in this book. An earlier liberal reviewer wrote that Al Franken doesn't match up to Rush. Well, in his recent book, "Lies and the Lying Liars Who Tell Them", Mr. Franken has done something much more important than stooping to become "The Rush Limbaugh of the Left." He has written a thoughtful book that eschews the kind of 'thinking' that has gone into books like Mr. Limbaugh's. He has uncovered the preposterous arguments that are much of the basis of the work of such conservative 'thinkers' as Mr. Limbaugh, Ms. Coulter, Mssrs. O'Reilley and Hannity. He counters their unfounded assertions and outright lies with, if you can believe it, FACTS. As he says at the end of the book, Liberals do not need an operation like the right-wing has. We need to focus on countering their distortions and supporting our views with cold, hard truth. An important book, but important only as a case study of conservative propaganda. Serious conservatives (among whom I most certainly do NOT include George Will) must find this book and others of the genre

Published by Thriftbooks.com User , 18 years ago
Rush Limbaugh's "The Way Things Ought To Be" is one of the great landmark books of the conservative movement. Today, I am a conservative Republican in a family full of Democrats. After listening to Limbaugh's radio show a couple of times, and watching his television show a few times, I began to read this book, and it was the beginning of my conversion to conservatism. TWTOTB, and its follow-up, "See, I Told You So," set the tone for the Gingrich revolution of the 1994 election when the Republicans regained control of the House and the Senate. In TWTOTB, Limbaugh confronts a number of issues including abortion, feminism, AIDS, the environment, animal rights, socialist-utopianism and "entitlemania" (entitlement programs, and this b.s. mentality of "my country owes me something"). Rush also defends the 1980's and sets the record straight on Ronald Reagan after years of lies and disinformation by the left. After twelve years, "The Way Things Ought To Be" remains a great source for the study of conservative thought. I recommend it not only for conservatives, but also for any liberals or moderates who seriously wish to conduct an honest study of conservatism and what we really believe.

Published by Thriftbooks.com User , 22 years ago
I was thumbing through my dittohead bartender's guide, and it compelled me to come back and check out Rush's old books. I forgot how funny he could be. For any serious Limbaugh fan, this is a must! Issues change so fast in the political world, it's interesting to go back and read "The Way Things Ought To Be" and hear that "spotted-owls" were once at the top of the agenda! In addition, Rush's books always have a "timeless" theme when he talks about hard work, entrepreneurism, and the American Dream. His critics should look at Limbaugh's "true" record: from several firings to world renown entertainer (if that's not the American Dream, I don't know what is). I highly suggest dittoheads pick this up, as well as "See I Told You So" (Rush's 2nd Book) and "Bob Cobb's Dittohead Bartender's Guide" (Not one of Rush's books, but just as funny). Conservatism is not dead in America, and Rush Limbaugh's popularity will continue to exhibit that fact. Keep entertaining, Rush!
Trustpilot
Copyright © 2022 Thriftbooks.com Terms of Use | Privacy Policy | Do Not Sell My Personal Information | Cookie Preferences | Accessibility Statement
ThriftBooks® and the ThriftBooks® logo are registered trademarks of Thrift Books Global, LLC