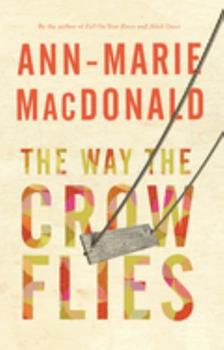 The Way the Crow Flies

"One of the finest novels I've read . . . .a fiercely intelligent look at childhood, marriage, families, the 1960s, the Cold War and the fear and isolation that are part of the human condition.... it... This description may be from another edition of this product.

Published by Thriftbooks.com User , 17 years ago
I don't read much fiction, preferring nonfiction because of its generally closer connection to the real world. I want to learn about the way things really are, and I just don't see the point of reading a lot of crap that people have dreamed up in order to be cool or clever or that will look good on the big screen after the movie rights are sold. Many of the novels I read are programmatic, transparently plotted, implausible, mannered...all sorts of dismaying faults that are so glaring to me I can't believe other people tolerate them.From this book, however, it is possible to learn about realities: of the human soul, the psyche, ethics and morals, the crossed stars of differing outlooks, the failure of simplified rules of conduct, the tragedy of missed signs and mixed signals, and the random, remorseless absence of justice in the world. There is so much that is so deeply perceived in this book that I was amazed. I consider myself a pretty fair writer, but I could write for a thousand years and never create a book as good as this. The plot is intricate, beautifully so, but in the best way--it unfolds with a seeming randomness, turning both on large events and small ones and accidental congruences between the two in a way that seems unpredictable, uncharted, natural. Apart from just a few compressions and conveniences for the sake of comprehendability, the plot is unusually believable. But unlike fiction where the action truly IS random, and thus purposeless, there is a concerted story here, meanings that lie in the unfoldings of events. Beneath its superficial appearance of being just another chatty modern book with the helpful label "A Novel" on the dust jacket, The Way The Crow Flies is tragedy in an ancient sense. It's about lies, concealments, perversions, flaws of character; if you have never pondered seriously on the subject of ethics and morals, good and evil, the dilemmas and concequences upon which this story centers will have little meaning for you. I read a professional, published(!) review in which the reviewer said, in exasperation, that the book is "about a murder, after all," and the author should just stop talking and tell us who did it! I think this illustrates the exact wrong way to approach this book. The fact that the most serious event in the book is a murder (two, actually), and the author waits until the end to reveal the criminal, is the ONLY commonality that this novel has with the genre of the "thriller," the murder-mystery-detective-drama that has such well-established conventions and such an avid fan base. This plot is not complicated in order to better hide the clues as you follow along trying to figure out whodunnit...in fact, I think I could even argue that whodunnit is more or less incidental to the story, except in a couple of dimensions that don't have much at all to do with crime and punishment. (For those of you who have read the book, consider what the author actually tells us near the end about the actual instig

Published by Thriftbooks.com User , 18 years ago
I couldn't agree more with most of the other reviewers here, although I will go so far as to say that the first 150 pages (rather than 100 as mentioned by another reviewer) are a bit slow and difficult to wade through, even so I say it still earns 5 stars. Once this wonderful, destined to be a classic novel gains momentum, you'll be rereading passages just to make it last longer. It is a very long book at just over 700 pages. As in MacDonald's debut novel Fall on Your Knees, she has created characters that you will love, hate, cheer for, jeer at and cry for. Both of her books have a penchant for elicting our emotions. I found myself weeping for the main character Madeleine at several points throughout the book. This is a mystery, a family saga, a spy novel, a coming of age novel, a comedy (though possibly a dark one), a love story, and a horror story. It encompasses all genres in one. Set amidst the backdrop of the race for the moon, the cold war and a time that was safe and family oriented but rapidly changing. I loved the depiction of the family of the era, the marriage of Jack and Mimi, who was the consumate wife of the time. The relationships between parents and children, especially that of Jack and Madeleine. MacDonald's use of language and realism is incomparable to most of todays authors.I just can't say enough about this book, if you are considering it, and you must be or you wouldn't be reading this, consider no more, click on the buy button, you won't regret it. The characters will live on in your memory like old friends forever.

Published by Thriftbooks.com User , 18 years ago
I read Ann-Marie MacDonald's first novel "Fall On Your Knees" and felt that was an incredible story. I believe this is just as good if not better. It takes place in 1963 Canada. It is about an Air Force Family and what takes place at the base they are presently stationed at, Centralia in Ontario near the US border. The father, Jack, is quite a likable all around guy who gets in over his head on a secret mission that just about destroys him. The wife, Mimi, a French-Canadian is perhaps my favorite character. She is such a typical 60's mom. Actually all the characters depict the early 60's right down to the smallest detail. The story is mostly told from the 9 year old, Madelines, point of view. It involves child abuse and murder and espionage and it all intertwines to make for quite an exciting and enjoyable read. Ms. Mac-Donald captures the times so well it takes me back.. I was a child from the 60's and appreciate her well defined descriptions of life as it really was then, right down to when the young girls sign each others autograph book at the end of the school year......boy, can I remember that!!!! This is not only about going down memory lane. It is a good mystery and character study of real everyday people and circumstances that can so truly happen in anyones life. I appreciate Ms. Mac-Donalds writing and look forward to her next novel.

LOVED THE FIRST - THE SECOND EVEN MORE!!

Published by Thriftbooks.com User , 18 years ago
A father "wants what he has". MacDonald creates a family that all of us who grew up in the sixties wanted to be a part of - and then she deconstructs it!! Exquisitely, quietly, despairingly the characters struggle to make sense of a world, a time and an event that does not fit into their innocent technicolor lives.MacDonald's story hardly let me breathe - her sense of place, her depth of character, and her incredible insight into the mythical innocence of childhood is so pure and so true it hurts. MacDonald is my kind of writer. She uses up all your senses, she surrounds you with place and time, and she pulls you into the story and leaves you exhausted but hopeful.

Published by Thriftbooks.com User , 18 years ago
A previous reader review compared The Way the Crow Flies to The Lovely Bones. I don't see that at all, the only similarity being the charm bracelet. I thought that this book was more like the book The Little Friend by Donna Tartt, could have been, but wasn't. Both books begin with the murder of a small child, but Ann-Marie MacDonald not only gives us an ending, she makes us see how such a horrific thing could happen. The book is long, and some of the political conversations are too long and boring, but they are quite necessary, as they give the reader a complete understanding of Jack McCarthy, the father of Madeleine. Everything adds up, there are no loose ends. The sixties are vividly brought to life, from the perfect military wife Mimi, to the almost bohemian Karen Froelich, who wasn't perfect and didn't have "perfect" children. All of the characters are important, each one has a place in the story; Henry Froelich, Simon, Oscar Fried, Mr. March, each of the children. They all have roles, and it is all tied together perfectly. My only complaint about The Way the Crow Flies is the very end. With all of Ms. MacDonald's attention to detail, she doesn't tell us anything about the two people I really wanted to know what happened to. But all in all, a wonderful book. Highly recommended.
Trustpilot
Copyright © 2022 Thriftbooks.com Terms of Use | Privacy Policy | Do Not Sell My Personal Information | Accessibility Statement
ThriftBooks® and the ThriftBooks® logo are registered trademarks of Thrift Books Global, LLC