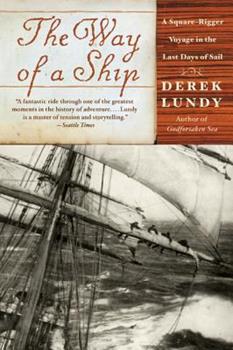 The Way of a Ship: A Square-Rigger Voyage in the Last Days of Sail

When, as a young man in the 1880s, Benjamin Lundy signed up for duty aboard a square-rigged commercial sailing vessel, he began a journey more exciting, and more terrifying, than he could have ever imagined: a treacherous, white-knuckle passage around that notorious "graveyard of ships," Cape Horn. A century later, Derek Lundy, author of the bestselling Godforsaken Sea and an accomplished amateur seaman himself, set out to recount his forebear's journey...

The Way of a Ship Purchase Review

Published by Thriftbooks.com User , 12 years ago
The book was delivered promptly and in very good condition, though I noted a "Not for Sale - Proof Copy" title on the front. The book is well written, entertaining, and very authentic.

Them was the days

Published by Thriftbooks.com User , 16 years ago
"Them was the days, sonnies, "Them was the men, "Them was the ships, "As we'll never see again." (From the book) This book is the author's imagined account of his grand-uncle's voyage as a crewman on the "Beara Head," a four-masted barque sailing around Cape Horn from Liverpool to Varparaiso, South America, in the 1880's. The author creates an engaging narrative of characters and things that may or may not have happened on the voyage, based on log information and what is known about the trip. Interspersed are chapters with general background material on the ships, history, and difficulties of the time. I found this a very engaging read, and when I had finished it I was wishing for more. The life of a seaman in those days was truly harsh, a life of constant misery and hardship. The men live on short rations, long hours, little or no sleep, constant cold and damp, battling storm after storm, climbing up in the masts 160 feet above the rolling deck to deal with canvas sails weighing hundreds of pounds. Some men get their fingernails pulled out, some fall to their deaths in the sea, never to be seen again, and some live on to see the next port and another voyage. If you are interested in sailing ships and stories of the sea, you will like this book.

Fictional narrative with a focus on seamanship

Published by Thriftbooks.com User , 18 years ago
The Way Of A Ship: A Square-rigger Voyage In The Last Days Of Sail recreates a sea voyage on one of the last merchant sailing ships near the close of the 19th century, and provides a satisfying blend of historical reconstruction, fictional narrative, and focus on seamanship. It's hard to easily categorize this account: The Way Of A Ship reads like fiction but couples such with rich historical detail, resulting in a multi-faceted guide.

Published by Thriftbooks.com User , 18 years ago
Lundy wrote a book I've been looking long to find. He writes of the day to day life of sailors from the 19th century that is very knowledgable and page turning. I finally got to see what it would have been like. He created characters that I felt interested in and wanted to learn more about. If you've ever wondered what it was like on a sailing ship- Lundy will anwser all your questions, and entertain. Again, a fantastic book!

A compelling blend of maritime history and nautical fiction

Published by Thriftbooks.com User , 18 years ago
Derek Lundy's "The Way of a Ship: A Square-Rigger Voyage in the Last Days of Sail" is in large part a history of blue-water merchant shipping in the late Nineteenth Century with a particular focus on those ships rounding Cape Horn, along with literary meditations by the author upon the works of Melville and Dana and Conrad. But interleaved with the history is Lundy's account of an imagined 1885 voyage around the Horn by his great-great-uncle Benjamin aboard the fictional 4-masted barque Beara Head. It is a harrowing, but by no means atypical voyage aboard a giant iron-hulled square-rigger of the era, its crew kept small by the owners' economies necessary to compete with steamships. This novel-within-a-history is a useful device for conveying the harsh realities of life aboard such a vessel, and Lundy is well up to the challenge of portraying ships and the sea in convincing, highly vivid detail. This will come as no surprise to readers of his earlier book, "Godforsaken Sea: Racing the World's Most Dangerous Waters", about the 1996 Vendee Globe race. The spark that drove Lundy to write this book is a simple (and perhaps unanswerable) question: how were his great-great-uncle and men like him able to challenge Cape Horn? Even with the strong iron hulls and wire rigging of the 1880's, Cape Horn killed men and ships with a regularity that would dismay the modern world. And if wind and wave were not enemies enough, then inadequate food, terrible living conditions, and hard-driving captains and mates would supply sufficient misery to seemingly make any rational man balk from voluntarily undertaking such a voyage. Of course, not all the seaman aboard were willing volunteers, dockside "crimps" if necessary supplied the required number of drugged and drunken men to fill the meager crew rosters permitted by penny-pinching owners. No records other than family stories and a few old letters survive to chronicle Benjamin Lundy's actual experiences or even to name the ships he sailed on, so his great-great-nephew to better understand the man and others of his ilk decided to reconstruct what his first ocean-crossing voyage might have been like, aboard a square-rigger carrying coal from England to Valpariso, Chile. Coal might seem at first thought an innocuous enough cargo, but in fact it was not. Coal, especially damp coal, often ignited by spontaneous combustion during these lengthy voyages and sometimes even exploded. Very probably quite a few of those big sailing merchantmen that mysteriously vanished at sea were victims of such slow, secret heating, deep in their black holds. Although the young Ulsterman Lundy is a veteran of the coastal trade, the challenges of working such a deep-sea merchantmen were beyond both his experience and his imagination. Derek Lundy crafted his story after intensive research that stretched to include sailing some of the same waters himself, although the author confesses a disappointed relief in not encountering a real
Copyright © 2022 Thriftbooks.com Terms of Use | Privacy Policy | Do Not Sell My Personal Information | Accessibility Statement
ThriftBooks® and the ThriftBooks® logo are registered trademarks of Thrift Books Global, LLC