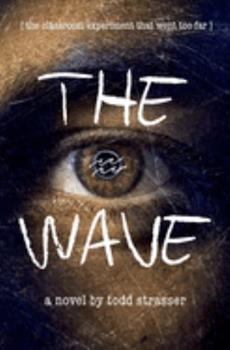 by Todd Strasser and Morton Rhue

This novel dramatizes an incident that took place in a California school in 1969. A teacher creates an experimental movement in his class to help students understand how people could have followed Hitler. The results are astounding. The highly disciplined group, modeled on the principles of the Hilter Youth, has its own salute, chants, and special ways of acting as a unit and sweeps beyond the class and throughout the school, evolving into a society...

Published by Mikki , 1 month ago
This was a smooth easy book I could breeze on by. Finished it in one sitting it was that good. I loved the build up of the story and seeing how and where things shifted. Overall, it was an interesting book to read through and definitely would recommend.

Finished in one sitting!

Published by Sabu , 1 year ago
Woah! Very neat experiment ran in a school. It’s about blind following a leader; peer pressure; consequences of joining a movement with no judgement, etc. Very good!

Published by Thriftbooks.com User , 16 years ago
When Ben Ross decides to illustrate how Naziism came into being, he conducts a very dangerous experiment. He insists that the students in the high school history class he teaches stand and salute when responding; he teaches them the credo "Strength through discipline!" "Action through Discipline!" The students quickly respond and one boy who had previously neglected his stuides and personal grooming transformed into a serious diligent student under this new approach. In time, the students are so pulled under the Wave, as the movement is called. They insist that other students salute them; they conduct Wave rallies and even attack a boy because he is Jewish. Parents pressure the principal to take some action and it is only the teacher's clever way of bringing the experiment to an end with the help of two students who had their own brushes with danger involving the Wave to show just how fascism can be encouraged and developed. This was based on an actual case in California in 1969 and it illustrates the power of group mentality. An excellent, tautly written work!

Published by Thriftbooks.com User , 18 years ago
I liked this book very much. I especially liked the mottos: Strength through Community! Strength Through Discipline! Strength through Action! My class read it and I liked it very much. I felt sorry for Robert Billings in the end. I wondered how Mr. Ross felt when he had to stop the wave. I mean, like, how would you feel like if you started something very sucessful and suddenly YOU HAD to stop it? I also felt sorry for the members of The Wave because Mr. Ross controlled them for such a long time, then saying "This is your leader. See what you've becoming?" It was very exciting, but it also teaches us a valuable lesson: Don't trust someone just because they are in a position of trust or authority. I guess I have learned that too after reading this book. This was a great book, and I'd wish to research more about WWII. Wouldn't you?

Highly recommended for adults and kids to read together

Published by Thriftbooks.com User , 20 years ago
I'll start out by saying to adults out there that this is a book I would highly recommend...for your youngsters. First, it has characters that young adults like to read about--high schoolers, cheerleaders, football players, etc. Strasser also includes minor characters for break away from the action or for comic relief. I know my students enjoyed the characters, especially the girls who enjoyed the interaction between them and the fact that the progagonist is a female. Second, it deals with things that many young adults should know more about and/or have strong feelings about: the Holocaust and peer pressure. Discussing Nazi-ism with my class prior to reading the book caused them to ask many of the questions that the characters asked. The book helped them to understand the Holocaust better and lead to a discussion about peer pressure and the importance of setting your limits clearly before someone in high school pressures you into something (drugs, drinking, sex, stereotyping). Finally, it's a well written book. It has short chapters (everyone likes those), it's fast paced (because the book takes place over a week or so) and the main points are easilly understandable because the author has the characters repeat important information in different ways several times to make sure the young adult reader is not getting lost in sub-plots. In all, an excellent work that more parents or other adults should read with their children.

Published by Thriftbooks.com User , 20 years ago
The Wave by Morton Rhue"Morton Rhue" is a pseudonym and his real name is Todd Strasser . He was born in New York City in 1950 and he grew up on Long Island (N.Y.). Todd went to the I.U. Willets Elementary School. The he went to the Wheatly School for junior high an high school. He had trouble with spelling and grammar. Later he graduated from Beloit College. He was a reporter on the Middletown (N.Y.) Times-Herald Record and an adverting copywriter before his first novel for young people, Angel Dust Blues, was published 1979. For some years he supplemented his income as the owner of Toggle Inc., a small fortune-cookie company. He and his wife, Pamela, live not far from New York City with their daughter, son, and yellow Labrador retriever. "The Wave" was the first book he had published under his pseudonym "Morton Rhue". As Todd Strasser he published more than 100 books. He wrote movie novelizations, too, for example "Free Willy", "Jumanji" or "Home alone". He got many awards for some of his books.The book is called `The Wave', because the experiment, the teacher started is named like that. His intention is to create something, which symbolises movement, direction and impact. Then he gets the idea of calling it `The Wave' , because a wave has these characteristics. In order to give the `Wave members', his pupils, a feeling of community, he also introduces a special symbol and a special salute. The symbol is a circle with the outline of a wave inside it. The salute is to cup the right hand in the shape of a wave, then to tap it against the left shoulder and hold it upright.Ben Ross a history teacher at an American high school is discussing the horrors of the holocaust. The students ask how all this could happen. They ask if all the Germans were not Nazis, why they just stood by and watched. Mr. Ross can not answer their questions properly. He wants to start an experiment. He wants to recreate the situation of life in Nazi Germany. This experiment is called The Wave. The Wave is completely different to their normal lessons. There is a membership card and a special salute. The new Wave community is a kind of secret family, something special. Other students want to be involved and members recruit new members. So the Wave moves beyond the classroom. Later the Wave gets out of control. Anyone who says something against the Wave is an enemy, these people are threatened. After a while Mr. Ross realizes that the Wave gets out of control. He decides to end his experiment abruptly. He organizes a Wave rally. When the lights in the hall get out a film of Hitler and the holocaust appear on the TV-screens. The film stops with a picture of Hitler surrounded by soldiers. Finally Mr. Ross says: "Yes you all would have made good Nazis... Fascism isn't something those other people did, it's right here in all of us".The author of the book ‚The Wave' uses a limited omniscient narrator for the story. That means that it is told from the point of view of the most importa

A must-read about consequenses of group pressure.

Published by Thriftbooks.com User , 22 years ago
Can you imagine recreating a leader like Hitler and a group that followed him like the Nazis? Well, this book does. The Wave is based on a true occurance in Palo Alto, California in a High School History Class. This book is about a classroom experiment that goes too far. Mr. Ross is a High School teacher that teaches a group of students that form "The Wave". When most of the school gets caught up in "The Wave", two students realize it has gone too far. But can they stop it before it's too late? I thought The Wave was a very good book and really made you think if something like this would ever really happen again. I give The Wave 5 stars.
Copyright © 2020 Thriftbooks.com Terms of Use | Privacy Policy | Do Not Sell My Personal Information | Accessibility Statement
ThriftBooks® and the ThriftBooks® logo are registered trademarks of Thrift Books Global, LLC