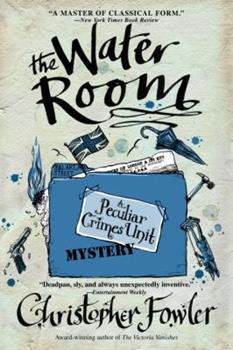 "Traditional mystery buffs with a taste for the offbeat will relish British author Fowler's wonderful second contemporary whodunit featuring the Peculiar Crimes Unit and its elderly odd couple, Arthur Bryant and John May."--Publishers Weekly (starred review) How can an elderly recluse drown in a chair in her otherwise dry basement? That's what John May and Arthur Bryant of London's Peculiar Crimes Unit set out to discover in a city rife with shady...

A great Who Done It but you need a dictionary handy

Published by Thriftbooks.com User , 13 years ago
I am both an Agatha Christie and Janet Evanovich (Stephanie Plum) lover. So judge this review as you may. . . I found this mystery to be excellent and absorbing although I needed my dictionary (or Google) handy as the author writes in English rather than what we dumbed down souls now consider English. I highly recommend it to those of you who enjoy complex multiweaved plots and who enjoy words.

Published by Thriftbooks.com User , 16 years ago
If you like an offbeat, thought-provoking story, I highly recommend this mystery by Christopher Fowler. Bryant and May, the odd-couple detectives of London's peculiar crimes unit are at it again. This time they must solve the mystery of the dry woman drowned in her basement. It leads them through lost rivers, Roman mythology, paganism, and, of course, the history of London and its class struggles.

Published by Thriftbooks.com User , 17 years ago
The first of this series, "Full Dark House," was very good and this was even better. My only two regrets are that (1) the characters are of an age where you wonder how long they can be around and (2) I wish there were more books already there for me to read. But I know the next book is due out soon, so I'll take heart. The relationship and dialogue between the two detectives is priceless, and there are great supporting characters. The writing is wonderful-it's funny, suspenseful and educational, and, as with fine wine, should be savored but thoroughly enjoyed. Very highly recommended.

A riveting, clever, and funny mystery

Published by Thriftbooks.com User , 17 years ago
Christopher Fowler's Bryant & May mystery series is only two volumes deep --- the second installment, THE WATER ROOM, being newly published --- yet already it is finding itself on the A-List of many readers, including this one. There are a lot of adjectives one could apply to it: clever is one, charming is another, riveting a third. The premise of the series is that the London Police Department has a peculiar crimes unit, established during World War II, and at its helm are John May and Arthur Bryant, its two founding members, now well up in years. Bryant is the more eccentric of the two, and thus, may I say, a bit more interesting --- irascible, yearning for the past, and possessed with an indispensably brilliant fuzzy logic. May is more modern, willing to change with the times, and still able to think with his little head when the opportunity arises. The men are polar opposites --- hilariously so --- and thus work perfectly together. The crimes they investigate sometimes do not appear to be crimes at all, at least not initially. Bryant, however, ferrets out a bizarre element or three, and, after you toss in a hoard of suspects, some quietly brutal circumstances, and Bryant's ongoing penchant for providing a fascinating running commentary for whatever portion of London the team happens to be in, one has a novel that is irresistible by any standard. Think Lord Peter Wimsey meets "The X-Files," or a more sedate version of "The Avengers" with Steed as an octogenarian, and you wouldn't be far off at all. THE WATER ROOM is an innocuous title, considering what occurs herein. The Peculiar Crimes Unit is drawn into the investigation of the death of an elderly recluse. Such a circumstance would not be unusual, or unexpected, except that the unfortunate woman drowned while sitting upright in her dry basement. Bryant and May become involved at the request of the woman's brother, whose expertise is occasionally used by the unit, even as her death is classified as undetermined and the case is officially closed. Bryant does what he does best, rudely kicking over stones and knocking on doors, leaving a disturbed domestic path among the neighbors of the woman in his wake. Meanwhile, May is unofficially investigating a civil servant who seems to have been retained by a criminal element for nefarious purposes that somehow involve London's underground lost rivers. One can see the cases dovetailing --- or at least appearing to do so --- but Fowler's pacing, always picture-perfect, will not be rushed. His plotting is wonderful in THE WATER ROOM and yet is eclipsed by the characterization of the primary and secondary principals within. One comes to really like the people encountered on the pages, even Raymond Land, the nominal overseer of the Peculiar Crimes Unit who does his level best to simultaneously keep the unit on track while keeping a blind eye turned to what really is going on. THE WATER ROOM stands just fine on its own. I had, however, the oddest fee

Published by Thriftbooks.com User , 17 years ago
The genius of this series, I believe, lies in the fact that the author has taken the traditional police procedural genre and completely turned it around on its head. To begin with we have the Peculiar Crimes Unit -- not your usual conventional police department dealing with robberies and murder but rather a unit that has been currently assigned to deal with the more troublesome, less cut and dried cases that seem to be heading no where, and that uses (on occasion) witches, psychics and academics to help solve crime. And then we have Bryant and May, who are also not the usual fare (the Brit detectives who simmer with intelligence, neuroses and sex appeal), but who happen to be 70-something police officers who should have been retired years ago, who are fully capable of doing their jobs and who relish doing them. In "The Water House" Bryant and May are back in full form as they enthusiastically delve back into the work, setting up their new offices (the previous one had been destroyed in a bomb explosion), and taking a stab at solving crimes that other police officers have either overlooked or else washed they hands off. Kallie Owen is terribly afraid that her relationship with her longtime boyfriend, Paul, is on its last legs. Money is short and Paul (who is in the music business and who is facing redundancy) is expressing the need to travel and see the world (without Kallie at his side) before he grows too old. Desperate for advice and a friendly ear, Kallie goes to visit an old school friend, Heather Allen, who persuades her to buy a house on her street (Balaklava Street) that's just gone on the market. The old lady, Ruth Singh, who had lived in the almost decrepit house has suddenly died, and her brother wants to make a quick sale so that he can immigrate to Australia. Carried away by Heather's enthusiasm, Kallie succumbs and buys the house. Except that things don't really work out as she had hoped. The house needs a lot of work, and this is pushing her and Paul even further apart. Add to that the rumours surrounding Ruth's unexplained and sudden death, and the unnatural interest that the Peculiar Crimes Unit seems to be taking in Ruth's death, and Kallie is beginning to wonder if she has done the right thing to buy the house. And when Kallie begins to sense a sinister presence in her house, she really beings to wonder if she's about to have a nervous breakdown or if there is something (or someone) truly evil haunting Balaklava Street... This is the second Bryant and May, Peculiar Crimes Unit mystery novel, and it proved to be as quirky, absorbing and enjoyable a read as the first book in the series, "Full Dark House." Fast paced and with a very intriguing storyline, "The Water House" held my interest from beginning to end. It was a slightly more complex read than the usual police procedural, but it really was well worth the sticking out factor. Especially since the author had managed to make the book less dense by employing a lighter and sli
Trustpilot
Copyright © 2022 Thriftbooks.com Terms of Use | Privacy Policy | Do Not Sell or Share My Personal Information | Accessibility Statement
ThriftBooks® and the ThriftBooks® logo are registered trademarks of Thrift Books Global, LLC