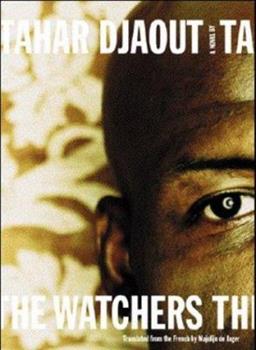 The renowned author of "The Last Summer of Reason" achieved great acclaim for this elegant, chilling novel, winning France's prestigious Prix Mediterranee in 1991. "The Watchers" is a politically and morally resonant fable of malevolent bureaucracy, thoughtless fundamentalism, and the danger of sacrificing liberty in the name of patriotism.

Published by Thriftbooks.com User , 19 years ago
Finally available in English, assassinated Algerian author Djaout's prize-winning novel oozes menace and national confusion. The plot is fairly simple, a young teacher rents a house in a small town outside Algiers. There, he works on perfecting a new kind of loom, which he hopes to exhibit at an international inventor's fair in Germany. However, a lonely and venal neighbor reports the stranger's new occupancy and interprets his presence as highly suspicious to an informal group of old ex-revolutionaries who effectively run things. This results in the inventor's innocuous attempts to get a passport turning into a Kafkaesque bureaucratic farce. Faced by unknown and unseen opposition, he struggles to get permission to go to Germany. When he meets with unexpected success, the cabal aligned against him must find a scapegoat for the obstructionism.There's a lot going on in the book, and sometimes it's hard to get a handle on it all. There's the obvious critique of the bureaucracy, as well as the privileged status of the revolutionaries in society, and the low status of those who create. Even more importantly there are also clear glimpses of a nation turning in on itself and of the fundamentalist Islam that gained great popularity in the early 1990s. And in a sort of wistful opposition to this is a nostalgia for the sounds and smells of the countryside, and the innocence of youth. In the end it's a tragic and sad tale, just like the last 13 years of Algerian history.

Important now more than ever.

Published by Thriftbooks.com User , 19 years ago
The Algerian author Tahar Djaout was assasinated by Islamic terrorists in 1993 for what was claimed to be "the effects of his fearsome pen". During his short life, Djaout was regarded as one of Algeria's best and most promising writers.In a small town in Algeria, is an old war veteran Menouar Ziada who is haunted by memories of past wars and is only too happy living most of his life just outside his home, chatting with passersby. One day Ziada notices what he thinks are some mysterious goings-on in a house down the street. Ziada is bothered enough with suspicion about this that he warns the locals that "we should expect a great disaster in our city sometime soon." Ziada's focus of supsicion turns out to be some harmless tinkering by an inventor Mahfoudh Lemdjad. Lemdjad has developed a new kind of loom and is looking to patent it and show the tool in the world fair. The invention however, is not well received at the local government offices. Lemdjad is told off summarily by a bureaucrat: "Surely you know that in our sacred religion the words creation and invention are sometimes condemned because they are perceived as heresy." The obstacles that Lemdjad has to face just to get the most basic of tasks done portray only all too realistically the corruptions of a sick society. When Lemdjad finally does it all and even "creates a sensation at the Inventors' fair in Heidelberg", he finds his fortunes reversed. Unfortunately so does Menouar Ziada. To reveal more would be giving too much of the plot away. Djaout weaves a wonderful tale with plenty of atmosphere and a slight undercurrent of tension. The language is very rich and evocative. I found though that much of the slim novel required careful reading because it had too many long sentences. Despite this minor drawback, The Watchers is wonderful storytelling.The story, written more than ten years ago, is especially relevant in these times when even our most basic of human rights are under threat of being compromised. Djaout's voice continues to speak loud and clear even after he has been silenced-a triumph of the pen over the sword.

Published by Thriftbooks.com User , 19 years ago
Recreating the traumas that Third World citizens face every day, Djaout offers vivid pictures of their complex but fragile lives. Here, in an unnamed country, presumably Algeria, government bureaucrats are concerned only with protecting themselves, their jobs, and their kickbacks, their fear of change so ingrained that any hope of modernization and real progress is squelched. The average citizen tries to remain anonymous, making do in a society which does not reward excellence. As one bureaucrat explains, "...the words 'creation' and 'invention' are sometimes condemned because they are perceived as heresy, a questioning of what exists already...of the faith and the prevailing order." Menaour Ziada and Mahfoud Lemjad, men of different generations who never meet, illuminate these themes. Menaour, an old soldier living in a town near the capital, observes lights at night in a nearby, previously unoccupied, house. Bored, and fearful of "dangerous conspirators," he alerts his acquaintances, all former veterans of the civil war who have vowed "to struggle till their dying breath never to let the flame of patriotism in them be snuffed out." In fact, the house is being used temporarily only by Mahfoud, a young physics teacher, putting the finishing touches on his invention of a new loom, which he wants to patent. Alerted to the "suspicious" activities, however, the bureaucracy soon turns Mahfoud's life into a nightmare in which he must battle unknown enemies, the status quo, and officials who themselves fear being tainted by the accusations against him. Telling his story in the present tense, Djaout imbues it with vitality and immense feeling, revealing the palpable frustrations in the lives of both Menaour, who misses the simple country life and friendships he once enjoyed, and Mahfoud, whose creativity is regarded as irrelevant. Though he himself is religiously indifferent, Mahfoud and others like him face potential dangers from the very religious, in this case Mahfoud's brother, a mediocrity, who "in religious devotion...is looking for spiritual compensation" and may become an informer. Descriptions of nature are breathtaking, and the revelations of the characters' inner longings and thoughts are often unique (a sick child trying to read an adventure story which is too difficult is particularly memorable). Djaout's striking use of irony finds its ultimate expression in Mahfoud's invention of a loom and his celebration of women, who play no active role in this society. A powerful story of frustrated hopes.
Trustpilot
Copyright © 2022 Thriftbooks.com Terms of Use | Privacy Policy | Do Not Sell My Personal Information | Accessibility Statement
ThriftBooks® and the ThriftBooks® logo are registered trademarks of Thrift Books Global, LLC