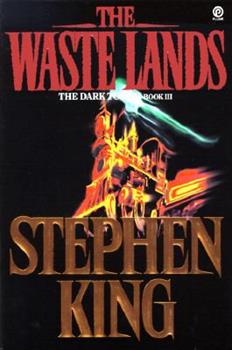 (Book #3 in the The Dark Tower Series)

Roland continues his quest for the Dark Tower, but he is no longer alone. He has trained Eddie and Susannah-who entered Mid-World from their separate whens in New York City in The Drawing of the Three-in the old ways of the gunslingers. But their ka-tet is not yet complete. Another must be drawn from New York into Mid-World, someone who has been there before, a boy who has died not once but twice, and yet still lives. The ka-tet, four who are bound...

Published by Thomas , 8 months ago
Was supposed to come in “goo” shape came with a broken spine the pages are practically falling out it’s a mess and unreadable

Better than the last two!

Published by Horror crazy , 10 months ago
I agree with the reviewer who said this was better than the first two books! Obviously, I agree with any and all reviews that expressed this opinion! The Waste Lands has adventure, excitement, danger, terror, suspense, romance, and even a little humor. It also features deeper characterizations of our heroes. It really makes you love Jake because he proves to be a much tougher, much braver little boy than you would expect. This volume of the story feels like a more well-rounded adventure than the previous books as we see Roland and his fellow adventurers travel to a lot more fantastic places, meeting interesting, memorable characters throughout the journey. The only disappointing thing about the book is the cliffhanger ending, but if you wait as long as I did to even start reading this series, it’s no problem. By the time I took a renewed interest in reading these books, they had been around for years. Even if I had been interested enough in reading them to look around for them ANYTIME before I found the first book in a thrift store, the fact that I found almost all of these books in thrift stores proves how hard they are to find, for anyone who would like to buy them. The only other way you COULD buy them is online, which is not something that I ever want to do. The main reason is because I’ve never bought anything online, so, for me, it would be complicated. Besides, I also like the simplicity of just paying for things with cash. Anyway, for me, as a reader, knowing that the books had already been around for a long time by the time I bought the first three solved the problem of what to do about the third book’s ending. For years, I had already owned the fourth book because I received it as a Christmas gift. The Dark Tower III: The Waste Lands is a fantastic third volume of this thrilling and wondrous series! If you like this one, you’ll love the next installment, The Dark Tower IV: Wizard and Glass!

Published by Thriftbooks.com User , 16 years ago
Volume 1 was a good start, volume 2 was where King hit his stride with the series, volume 3 is where the series really got really, really good. Jake is back. Eddie and Susannah (formerly known as Odetta/Detta) are fully developed as characters. The story is fleshed out and much more takes place. Even Roland is a more three dimensional character in this installment, whereas he was almost a two dimensional stereotype in the other two volumes. I've said King hit his stride in volume 2, and the story really did, but this is where it gets really good and really sucks you in. It works on many levels. The only problem is the cliffhanger that King leaves you with at the end. Sort of a cheap shot, especially when you consider how long it takes King to write another Dark Tower book. Though now that the series is complete and you can read it all from start to finish, the cliffhanger isn't that big of a problem. But it sure was back then. If you weren't real keen on volume one, you have to give volumes 2 and 3 a try. And even though 3 is better than 2, if you didn't like 2, I'm not real sure that 3 will bring you into the saga. ALthough it might. give it a try.

Published by Thriftbooks.com User , 17 years ago
If you thought that the previous five Dark Tower books were departures for King, just wait until you read this one. At some point around the 11th Stanza ("The Writer"), "Song of Susannah" is, like the song says, guaranteed to blow your mind.Picking up right where "Wolves of the Calla" left off, our heroes Roland, Eddie, Jake, and the relative newcomer Father Callahan prepare for yet another sojourn out of Roland's world and into ours. Right off the bat, though, things do not go quite as planned. A Beamquake shakes the foundations of all the worlds, and we learn that the Tower is in much greater jeopardy than we may have previously suspected. And as always, wherever Roland goes, gunplay is sure to follow, but this time, it's waiting for him...King's further explorations into the rich world of the Dark Tower are as rewarding as they ever were. The characters, by now, have become as comfortable as old friends. Still, there are new facets to be seen yet, and we get a closer look at each of them as the story goes on.It's very difficult to write about this latest installment without giving what makes it so different away completely. The events and revelations found in "Song of Susannah" are so central to the themes of the overall story, and yet revealing them here would entirely ruin the fun of discovering them as King has presented it. Some readers will doubtless dislike the road King has begun to travel as the story approaches its conclusion, but I am convinced that many more will absolutely love it. It is a credit to King's growth as a writer that he can even attempt this ambitious sort of storytelling, and more, that he can do it successfully... at least, so far.One thing is certain: love it or hate it, "Song of Susannah" is King's riskiest and most surprising work yet. One the one hand, he is taking one of the most overused plot elements in fiction -- the baby of uncertain parentage -- and making something original and interesting out of it. On the other, he is attempting something seen in modern fiction only rarely... a self-relexive work that engages the reader on multiple levels. By the end of "Song of Susannah" you may find yourself thinking about the realities that fiction creates, and the fictions that "real" life presents us with every day. And if you do, I believe that is entirely the point. King seems to be angling not only toward a conclusion to Roland's quest, but also toward a deeply personal statement about what it is to be a writer. It is an ambitious road to travel, but so far, King has not let us down. In fact, what he has begun with this book has the potential to exceed all the expectations I had for it.'Ware, Constant Reader: "Song of Susannah," like "The Waste Lands," ends with a cliffhanger. In fact, there is not only one cliffhanger here, but two. The last pages of "Song of Susannah" should leave many readers, as it left me, powerfully hungry for the final book in the series. What lies in wait on the final page is, to say the

One of the most real, richly filled adventure stories ever.

Published by Thriftbooks.com User , 23 years ago
Of all the many Stephen King books, his Dark Tower epic is the what truly marks his genious. Together the Dark Tower series is the most richly filled adventure since Lord of the Rings, with some of the most real, living, breathing characters King has ever brought to life. Alone the Dark Tower II: the Drawing of the Three may be the best in the series so far. It remains one of the most action-packed and interesting adventures ever written. The story has such history and depth, and the characters are so life-like it's easy to forget it's a work of fiction. The story is inexcapable, unforgettable. A world all it's own that pulls you in and never ever let's go. Once you read this book you will never be the same. All you read will remind you of this world, and you will find peices of it in almost every book you've read and loved by Stephen King. Most of all you will be like the rest of us waiting tirelessly for the rest of the story to be written, and the mystery of the Dark Tower to be solved. Nothing you have ever read will prepare you for such an amazing trip through an even more amazing world. You will find other books full of knowledge about the Dark Tower, like: Insomnia, Rose Madder, The Stand, Salem's Lot, The Eyes of the Dragon. Even if just sharing a character, they all somehow tie in together. (And honestly, one of them tell more about the Dark Tower itself than any of the Dark Tower books so far.) And best of all, the story isn't over yet!! We've all got to wait for the last two or three to be written. The waiting is the hardest part, because the books are always read so quickly. Calling them page-turners is an understatement! They are landmarks.

THE DARK TOWER III is GREAT and THAT IS THE TRUTH.

Published by Thriftbooks.com User , 23 years ago
When this book first came to a bookstore near me, in its Trade Paperback Edition, I had to rush out and pick it up, being a Stephen King Dark Tower Fan and all. It turned-out to be one of the ten best books that I've EVER READ. The whole book was so romantically charged, it seemed to reach a temperature close to that of a fever. King's descriptions were incredibly vivid, especially when he talks about Eddie Dean dreaming that he is in a field filled with the reddest roses, where the Dark Tower is. King's mastery is fully displayed as he's able to go from describing a scene of spectacular beauty to one that is very ominous and suspenseful, when he discusses how the Tower's shadow seems to drown-Eddie-out in its massive presence. Eddie hears a loud sound, like that of a horn, from the very top of the Tower, and we begin to wonder: "Who the HELL is up there?" or -- worse yet -- "What the HELL is up there?" The introduction of Oy, was rather interesting, it added yet another level of human emotion to the story. For we are usually more noble, and less likely to give-up, when we're fighting for someone else (or something else, perhaps a pet, as in this case). The scene in which Oy almost falls from the bridge to Lud. Jake shows that he is determined NOT to let Oy fall, suffering and tolerating the pain -- although he did scream -- of the Billy-Bumbler's bite; Jake is strong, like most of the characters in this series of books. This also proves another point: "Appearances can be deceiving". So, even if Sci-Fi/Fantasy is not your USUAL THING, give the "Dark Tower [Book] Series", and your curiousity will be well-rewarded. By the time you get to this third book (and, yes, it will keep you interested enough to keep you going), this book will find a special place in your heart. What's more to say? The Dark Tower III is a GREAT BOOK, and that is the TRUTH!
Copyright © 2020 Thriftbooks.com Terms of Use | Privacy Policy | Do Not Sell My Personal Information | Accessibility Statement
ThriftBooks® and the ThriftBooks® logo are registered trademarks of Thrift Books Global, LLC