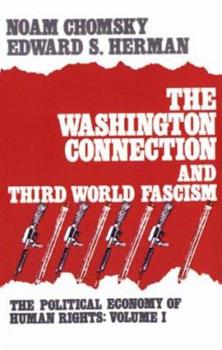 Analyzes the forces that shape U.S. policy in Latin America, Asia, and Africa, as well as the role of the media in misreporting these policies and their motives.

Published by Thriftbooks.com User , 18 years ago
This is a good book that explains in great detail how the U.S. has been involved in the oppression of alot of the third world in order to open up countries to be exploited and controlled by the American business establishment, which also controls the government and the media. Opening up other countries resources and trying to create a huge export economy for American investors was the main reason of our support of brutal sub-fascist regimes in which thousands upon thousands of people were killed, imprisoned and tortured by military and police forces trained and aided by the U.S. Many of these brutal murderers and torturers were trained at the schools of the americas in the Panama canal zone and in Miami for "counter-revolutionary" objectives to the south of this great power. There were no Soviets down there but we were in danger of the domino effects of communism. 'Communism' was just an evil word that was used to scare people into a jingoist frenzy, kinda like the word 'liberal' today. We were always much stronger than them with our state monitored and controlled form of capitalism. Yet these small countries in Central & South America were grave threats to American power in the region. Chomsky points out that the word communism as used by the government and media in U.S. terms really just meant, in many cases, an effort on the part of other countries at sovereignty and independence from the U.S. If they tried to use their natural resources and land for themselves and were not willing to share it with the U.S. business community, then they were met with extreme hostitity by the U.S. These things seem like common sense to me. During the 1950's the U.S. had a latin-american style terror regime in place being traind by U.S. advisors. A popular revolt overthrew it and then we escalated our involvement to a direct attack on South Vietnam which later expanded to N. Vietnam, Laos and Cambodia. Who knows how many bombs we dropped, how many people were killed, or how many died from the chemical warfare of "agent orange"? And for what? Because they wanted independence from the French and then the U.S. We were defending South Vietnam from South Vietnam people and supporting the terrorist U.S. backed regime in Saigon that tortured and murdered people. None of this surpises me, these are things that great powers do and always have done throughout history, but are rarely commented on until that power is no longer in power. I am proud to have Americans like Chomsky who go all out to reasearch and inform the American people about what is really going on and how and why we do the things that we do around the world. Chomsky always just tries to provide facts and doesn't really say his opinions about whether its right or wrong or what we could do differently. His point is more about how American power works and leaves it up to you to decide if the repercussions are worth it or not. I personally think that bottom line profits for the minority rich at

A discussion of American involvement in the Third World

Published by Thriftbooks.com User , 20 years ago
Volume 1 of Political Economy of Human Rights is a journal of American Imperialism in the contemporary context of the Third World.At over 350 pages, and replete with another 70 pages of notes and references, this tome is no less a scholarly endeavour than the other works of the authors and consequently provides for an informative look at US activity in most of the Third World. The book considers most countries in separate sections, provides background and historical reference and examines cause and effect.One common motif of the book is 'stability' as coveted above all by American interests and how different overt and covert means are imposed upon different countries to achieve it. The Washington Connection... is a brilliant foray into parts seldom travelled by popular media and recommended.

A Devastating Indictment of U.S. Imperialism

Published by Thriftbooks.com User , 22 years ago
Writing in 1979, using Church sources, reports from human rights groups, non-american and occasionally mainstream American news sources, and other means to document, the authors show that the regimes in the third world which the United States has provided heavy support, have often been incomparably worse that any Soviet sattelite or client in the post-Stalin era. Paraguay under Stroessner, Bolivia under Banzer, Brazil, Argentina and Guatemala under military rule, Nicaragua under Somoza, South Vietnam under Diem and Theiu, are among the regimes examined. The role of the mainstream U.S. media in covering up this support is demonstrated. There is an in-depth examination of Indonesia's invasion and subsequent genocide in East Timor, which had heavy U.S. support from its inception.

Published by Thriftbooks.com User , 22 years ago
I don't understand where a previous reviewer gets the idea that this book is "Stalinist"... Herman and Chomsky, through out the book, are contintuously decrying all forms of totalitarianism and everything else Stalin stood for and did. So, I guess I don't get what they're refering to.Probably, the reviewer is refering to the fact that the book is critical of US policy. Well, if that's "Stalinist", then this book is "Stalinist". But, most people would agree that dissenting with the policies of a country has nothing to do with "Communism" or sympathizing with Stalin, and a lot more to do with being honestly concerned with the injustices and atrocities abound in the world and laying them down in front of the very people they've been concealed from.That's what this book is all about. And I think it is right to do so.

If you're afraid of the truth you won't like this book!

Published by Thriftbooks.com User , 23 years ago
This book reveals the lies that the U.S. public has been fed by its government for the last fifty years. From Central America to Indochina, the U.S. has supported fascist governments that slaughter their own people. Chomsky's uncomprimising honesty in reporting the truth is refreshing if not a little frightening. This book will make you question the integrity of the U.S. government and U.S. media and rightly so!
Trustpilot
Copyright © 2022 Thriftbooks.com Terms of Use | Privacy Policy | Do Not Sell or Share My Personal Information | Accessibility Statement
ThriftBooks® and the ThriftBooks® logo are registered trademarks of Thrift Books Global, LLC