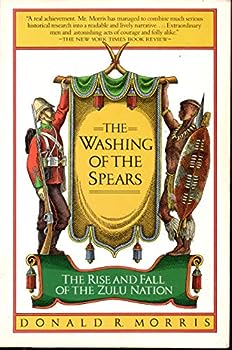 The Washing of the Spears: The Rise and Fall of the Zulu Nation Under Shaka and Its Fall in the Zulu War of 1879 (Touchstone Books)

A complete history of the mighty Zulu empire, which rose to power under Shaka & clashed in numerous battles with armies from Europe.

Published by Thriftbooks.com User , 21 years ago
Quite simply, one of the best-written books I have ever read, in any category. Fully deserves to be a classic.

The most difinative account of the short life os this nation

Published by Thriftbooks.com User , 22 years ago
This book deals with the rise of the Zulu Nation under Shaka to its fall under Ceteswayo. There are no glossed over facts, and the last reprint in 1996 has a covering prologue from Chief Mangasuto Buthelese. Any military historian with a keen interest in this Nations short life should make this book their top archive source. This book is still availble from some of the UK outlets priced at around £15.99. This history of the Black Spartans is a must. It tells of their true courage against unsormountable odds to defend their homeland against a well equiped and disciplined army, but also shows that they themselves were just as highly disciplined, and sure footed, and were not afraid to pitch Assegia and Cowhide shield agains, field guns, boxer henry .45 martini henrys, gatling guns and the formidable British Red Coats.

Published by Thriftbooks.com User , 23 years ago
This book is truly sprawling, interesting chronicle of the history of the Zulu nation. It spans from the rise of warrior king Shaka Zulu to the final destruction of Shaka's empire at the hands of the British army. While the sheer size may be a daunting prospect for many, the book will reward those who read it with a knowledge of the most colorful portions of African history. For instance you will be acquainted with the largest defeat ever suffered by the British army at the hands of natives. You'll also learn about the incredible stand at Rourke's Drift of 103 British soldiers against 4,000 Zulus. If you liked the movies, "Zulu", "Shaka Zulu", or "Zulu Dawn", read this book. Or just read it to know how events well over 100 years ago impact today in modern southern Africa.

Usutu! Where is my Asagi?

Published by Thriftbooks.com User , 23 years ago
Did you ever watch the movie "Zulu" featuring Michael Caine, Stanley Baker and Jack Hawkins(among others) when you were a kid? Did you marvel at the bravery of the Rourke's Drift defenders? I know I did! Well...its nearly all true. Get this book and find out the real story. I love Welsh choirs! But seriously, if you are interested in this particular episode of British imperialism read the book. Its better than Isandlawana!

An in depth view of main players of S.African history

Published by Thriftbooks.com User , 23 years ago
The most concise depiction of the clash between the European and native African cultures. This book pulls no punches, and seeks to tell this epic tale without prejudice. It may at times infuriate you but will always intertain. Includes: Battle of Isandlawana, Roark's drift, Hlobane, and Napolean III.
Copyright © 2020 Thriftbooks.com Terms of Use | Privacy Policy | Do Not Sell My Personal Information | Accessibility Statement
ThriftBooks® and the ThriftBooks® logo are registered trademarks of Thrift Books Global, LLC