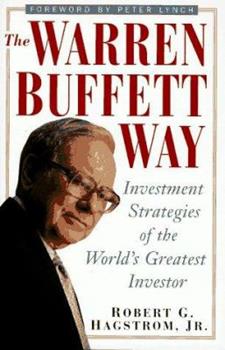 "Simply the most important new stock book of the 1990s, to date. Buy it and read it." -Kenneth L. Fisher Forbes The runaway bestseller-updated with new material included for the first time "The Warren Buffett Way outlines his career and presents examples of how his investment techniques and methods evolved and the important individuals in that process. It also details the key investment decisions that produced his unmatched record of performance."...

Published by James Benson , 2 days ago
Why struggle with bad credits when you can actually get them fixed within a couple of days with HACK VANISH, a professional hacker who has aided me in various ways, he fixed and increased my FICO credit score to a whopping 786 across all three bureaus, tracked my cheating wife calls, and also gave me access to all her social media accounts. HACK VANISH also specializes in recovering lost cryptocurrencies for victims of binary scams. Reach out to him today for help on WhatsApp: +1(747) 293-8514 or Email: HACKVANISH @ GMAIL. COM Thank me later.

Once Again, Take It With A Grain of Salt

Published by Thriftbooks.com User , 18 years ago
I am not Warren Edward Buffett. Unlike Mr. Buffett, who has the delightful headache of trying to figure out where to put his steadily growing billions, I am a non-investor, sitting on the sidelines, wondering what all the fuss is about. Like most readers of this book, I have been told incessantly to invest for retirement, and not knowing exactly how I should do so, I figured it might be a good idea to glean a few secrets from a proven successful investor. Hence, I read The Warren Buffett Way from cover to cover, hoping to learn a few things.And what did I learn? I learned that I am not Warren Edward Buffett. Unlike Mr. Buffett, whose circle of associates includes all of the Beautiful People of Corporate America, I am surrounded by ordinary people, more than a few of whom are looking for a way to get rich quick. Whereas Mr. Buffett is patient and thoughtful with his investments, most of the people I encounter are thoughtless and reckless with their gambles. These two things, which I increasingly began to ponder as I read this book, distinguish me from the Oracle of Omaha, and quite possibly from most readers of this book.The book consists of nine chapters, and is mostly historical in nature. It details many of Buffett's past exploits in the stock market, mostly the good moves but also some bad ones, and offers some of the principles guiding Mr. Buffett's stock investing strategy, grouped into three classes called Management, Financial and Market Tenets. The first four chapters of the book delve into the early history of Berkshire Hathaway, the key influences on Mr. Buffett which helped to shape his investment philosophy, Mr. Buffett's perspective on the financial markets, and the principles by which he goes about purchasing a business. The last five chapters of the book give example after example of some of Mr. Buffett's past stock moves, and tries to show his Tenets in action.The style of the book is mostly active until the fifth chapter, whereupon it becomes plodding. The book is extremely repetitive at points, and as other reviewers have pointed out, key concepts are not fully explained up front, suggesting that the possible target audience for this book are those having a strong background in the general principles of economics and business.In all honesty, I have previously encountered most of the content of this book in coursework or self-study. I previously read Mr. Hagstrom's The Warren Buffett Portfolio, and found the two books to be similar in some respects. That said, I still found this book to be very interesting and useful, primarily because it exposed me to an investment approach which utilizes these concepts in ways I had not previously considered. I also found it highly interesting on an anecdotal level, given that Mr. Buffett's investment career spans The Go-Go Years, The Nifty Fifty Stocks and the 80s and 90s Tech Stock Boom, and yet he never once participated in these tech-stock manias but handily outperformed tech

Published by Thriftbooks.com User , 20 years ago
I bought this book back in 1997. Up to then I had never invested in the stock market and did not give it any thought.This book opened a new door to me. I remember to grow ever more enthusiastic as I read through its pages for it showed me a whole new world. A gust of fresh air made me realize the overwhealming advantages of partly owning a great company in the stock market at a reasonable price as a small investor. I quit looking at the stock market as a simple casino and turned serious attention to it for long term investment. Not only did I find the studying of different companies by fundamentals and the process of investing very fun, but also financially very rewarding.Today I want to thank from these pages Warren Buffett and Robert Hagstrom for contributing to the spread of financial common sense in a world where the lack of it is stunning. And above all, for the privilege to read this masterpiece on investing and get an insight of Warren Buffett investment style. This book is strongly undervalued and should be bought by everyone that cares about his financial future. Strong buy recommendation. Full of wisdom and fun to read. And I owe to it my personal financial success, averaging 40% yield per year, just applying the investment principles taught here.Superb.

Published by Thriftbooks.com User , 22 years ago
I always thought that Warren Buffet made his fortune like every other crazy stockmarket freak, i.e until I read this book. Hagstrom explains how Buffet is able to rises above the market chaos. A must read for anyone interested in investing in the stockmarket.

Published by Thriftbooks.com User , 23 years ago
For starters, you can read this book and understand investing even if you're not a businessperson. Beginners should read the biography written by Roger Lowenstein first although this book is much more interesting. The book talks about the billionaire investor Warren Buffett, how he got started, his achievements, the type of guy he is, how he calculates what a company's worth. Much like a biography... but the best part in my opinion, are the details on Buffett's past purchases. Hagstrom (the author) actually gives charts to show these which to me is invaluable. You'll know what I mean if you've ever tried to put money in stocks as a value investor. To the experts (and I don't mean the people with advanced degrees or MBAs but the experienced VALUE investor), this book is a must have. I use it to study the specific purchases he made and by looking at the graphs, I think it's not hard to tell what Buffett was thinking, given what he already knows about the companies. And plus, you'll get some idea on calculating intrinsic value which I honestly think came from Hagstrom, not Buffett. But it's a start. As it relates to price, I'd say this book is undervalued, it's a screaming buy pitch (under six bucks when I bought it)... You'll learn a great deal about stocks and about people (from managers to stockbrokers).
Trustpilot
Copyright © 2022 Thriftbooks.com Terms of Use | Privacy Policy | Do Not Sell or Share My Personal Information | Accessibility Statement
ThriftBooks® and the ThriftBooks® logo are registered trademarks of Thrift Books Global, LLC