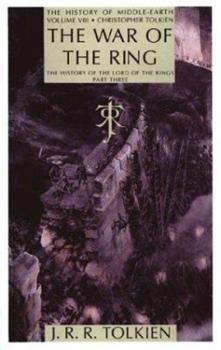 In The War of the Ring Christopher Tolkien takes up the story of the writing of The Lord of the Rings with the Battle of Helm's Deep and the drowning of Isengard by the Ents. This is followed by an account of how Frodo, Sam and Gollum were finally brought to the Pass of Kirith Ungol, at which point J.R.R. Tolkien wrote at the time: 'I have got the hero into such a fix that not even an author will be able to extricate him without labour and difficulty'...

Published by Thriftbooks.com User , 15 years ago
`The War of the Ring' is the third of a four volume series (`The History of the Lord of the Rings') within a series, (volume VIII of `The History of Middle Earth') edited by Christopher Tolkien, from the unpublished writings of his father, J. R. R. Tolkien, most famous as the author of `The Hobbit' and `The Lord of the Rings' (LotR). This thick volume, larger than `The Return of the King' begins with the destruction of Isengard by the Ents and Saruman's downfall (sort of) at the hands of Gandalf. The editor brings us at the end of this volume to the climax of the conflict between the forces of the West and Sauron, over the fate of the `One Ring'. Thus, it spans the last third of `The Two Towers and the first three-fourths of `The Return of the King'. Being an inveterate lover of maps, this volume is especially interesting, as it has lots of original maps penned by J.R.R. Tolkien himself, plus line drawings of important locations in the story, primarily Minas Tirith and Cirith Ungol. The largest map is of Mordor and Gondor, with a very nice `legend' explaining all the major features of the lands, especially those south of the White mountains which get very little mention in the LotR itself. One sidelight of this review of the drafts is to see how the names and characteristics of minor characters changed from Tolkien's original conception to their appearance in the final work. The Huorns, the semi-senescent trees `herded' by the ents appear under the name of `Galbedirs'. If you have found your way through the first two volumes of this `The History of the Lord of the Rings', you can't stop now. This volume contains notes on what certainly the most important part of the narrative.

Another study in Rings' creation

Published by Thriftbooks.com User , 18 years ago
"The War of the Ring" - Tolkien's preferred title for "The Return of the King" - is the third of four volumes dealing with the history of the writing of "The Lord of the Rings." Like the other volumes in the series, it features unpublished writings by Tolkien, supplemented, explained, footnoted, annotated and expounded upon by his son, Christopher Tolkien.If you're not a Tolkien fan, you need not apply. These incomplete and unfinished texts will only bore you. But if you're interested in seeing how the Professor developed the rich creation of Middle Earth, warts and all, this is a treasure trove of material.This book is part of the larger, 12-part History of Middle Earth series, which takes a close look at the creation of Tolkien's greatest achievement - Middle Earth itself - through early drafts, unpublished texts, and dead end writings.For ardent Tolkien readers, the series is a fascinating look at one of the great literary creations of the 20th Century, full of rich detail, writings never before seen, and stories only now being told. For more casual fans, it's text better left unread.Like the volumes that came before ("The Return of the Shadow" and "The Treason of Isengard"), we have the earliest versions of what would later become "The Lord of the Rings." Tolkien's troubles in bringing the story to a close, abandoned storylines, and alternate endings are all presented in incomplete prose. (Take a peak at the original end of Eowyn's character arc).The wealth of information is fantastic, and Christopher Tolkien goes to great lengths to examine each text, putting them in the context of the larger puzzle of his father's writings. The exploration of how "The Lord of the Rings" came about is fantastic - for those interested. Otherwise, it will bore. This is, after all, a series of unfinished draft chapters and essays on the text. I enjoyed it, but many won't.Anybody wishing to do a study of Tolkien's craft, into "behind the scenes" writings, or just interested in finding a few snatches of new Middle Earth material (even if in unfinished form, there are some scattered throughout the series) will certainly find what they are looking for here. Christopher Tolkien's work here is appreciated by scores of ardent Tolkien fans. Those looking for fresh new tales about hobbits and heroes, however, will be disappointed. This isn't new fiction, nor does it even feature finished works. Seek elsewhere if you are looking for more tales in the way of "The Lord of the Rings."

Published by Thriftbooks.com User , 18 years ago
Christopher Tolkien does yet another masterful job in describing the process behind his father's writing of "The Lord of the Rings" saga, covering the interval from King Theodeon's and Gandalf's arrival at Isengard to the opening of the Black Gate of Mordor. The book excels in its descriptions of Denethor, Steward of Gondor, the development of the "Paths of the Dead", the "Battle of Pelennor Fields", and Frodo's fateful encounter with the giant malevolent spider Shelob. It is well worth the reader's time learning how Tolkien developed these important episodes in the saga. I concur with an earlier reviewer who has lamented that Christopher Tolkien has not explored the issue of Gollum's near repetenance. However, this is merely a minor complaint of what is most definitely the latest volume in the ongoing authoritative literary "dissection" of the world's greatest fantasy saga by the son of its author. This splendid tome will appeal not only to diehard Tolkien fans, but also serious students of literature interested in understanding Tolkien's thinking behind the writing of "The Lord of the Rings" saga.

And the saga continues. . .

Published by Thriftbooks.com User , 21 years ago
"The War of the Ring" is the third installment of Christopher Tolkien's "The History of The Lord of the Rings" series, and the eighth volume of his massive "The History of Middle Earth".Like the two volumes before it, Christopher Tolkien takes the reader on a detailed journey of the creative processes through which "The Lord of the Rings" came to be. Of particular interest in this book:The development of the "Paths of the Dead" story.The development of the character of Denethor, Steward of Gondor.The development of "The Battle of the Pelennor Fields".The development of the story of Shelob and Frodo's capture.It's unfortunate that Christopher Tolkien was unable to finish "The History of The Lord of the Rings" in three volumes, so the reader is left with the story still unfinished. It is also worth noting that these books, especially as they proceed to the end of the story, do not simply rehash the final work. If sections of a chapter underwent little or no evolutionary development, they are treated briefly. The greatest attention is paid to those episodes which were written and re-written, often in very different ways.I was somewhat disappointed that the theme of Gollum's "near repentance" was not treated in detail, as JRR Tolkien felt that this was a key turning-point in the story. But again, if an episode underwent little development, Christopher did not spend much time on it.Five stars -- and another "Thank-you" to Christopher for this labor of love on his late father's behalf.

Another amazing job by Christopher Tolkien

Published by Thriftbooks.com User , 23 years ago
In the eighth volume of The History of Middle Earth Christopher Tolkien shows us his father's next step in the preparation of LOTR. In this edition many of tbe central themes to the story as it was published came int being, such as the palantir and the addition of Faramir. This book takes us from the destruction of Isengard to the Lords of the West marching on Mordor. We are also once again treated to sketches and maps of such places as Orthanc, Dunharrow, and Minas Tirith. I recommend this book to all Tolkien fans.
Trustpilot
Copyright © 2022 Thriftbooks.com Terms of Use | Privacy Policy | Do Not Sell My Personal Information | Accessibility Statement
ThriftBooks® and the ThriftBooks® logo are registered trademarks of Thrift Books Global, LLC