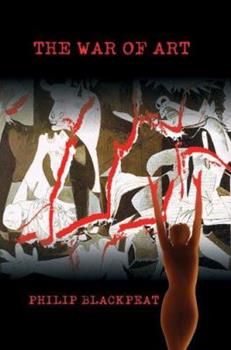 The War of Art

"I turned to the second photograph. It was Guernica again. It was vandalized again, but this time by someone who had charitably done his handiwork on the photo instead of the picture itself. Now a speech cloud with a tail, like those used in comics, emanated from the pointed tongue of the horse that dominates the work's central panel. It spanned most of the painting in length, this time covering the mother's face and sparing the child's. It contained...

Published by Thriftbooks.com User , 15 years ago
The War of Art has received attention in Greece, with favorable reviews in the press. The narrator, Philip Melanchthon, is a Greek lawyer working in Washington, DC. The book brims with Greek references, from the Goddess Athena's snake-encrusted goatskin (the "aegis") to Churchill's Second World War dictum: until now we said all Greeks fight like heroes. From now we will say: all heroes fight like Greeks. Greeks adore this dictum. But there are many other reasons to read this book, for Greeks and non-Greeks alike. I think the chief one is this: it takes literary and artistic ideas and constructs a mystery out of them that is as satisfying as the best whodunit. Art, war, homosexuality, propaganda: each is a potential culprit, or a potential victim. And then, in the truly amazing final twist, the whole edifice of ideas come tumbling down: this is the rare novel of ideas that doesn't take its ideas too seriously. As the reviewer below points out (though for him it is as criticism), Philip Blackpeat is no Grisham or Archer. He operates on a different plane entirely. More like Pynchon, as another reviewer points out, or Roth, McEwan or Cunningham. This is not a popcorn novel, and if the author was having a mid-life crisis when he wrote this one, let's hope it continues. The War of Art might best be described as a thinking man's "DaVinci Code." But fear not, it does have a popcorn ending. Bravo Blackpeat, whoever you are.

Pot boiler for the brain

Published by Thriftbooks.com User , 16 years ago
The War of Art is a story of investigative discovery. The question, "Why was a Picasso defaced?" is quickly posed, along with a "Who did it?", the answer to which we are assured will follow from the "Why?" The narrator, Philip Melanchthon, whom we are encouraged to believe is not the author, Philip Blackpeat, who shares the same occupation, lawyer, and city of residence, Washington, D.C., proceeds to lead us on a superheated 10 day discovery worthy of a warp factor 8 space time distortion a la Star Trek. The final resolution to the mystery is revealed in an inverted Poirot moment, with the perpetrator spoon feeding the diligent Melanchthon with the proper pieces of the puzzle. The War of Art is short on length but long on reading. There is more substance delivered in its 126 pages than in novels, mystery or otherwise, multiples of that length. Indeed, one might be more accurate in describing the book as a treatise with its (sometimes almost theorem-proof) didactic style. But that would surely mislead potential readers into dismissing the book as not pertinent to their palate. If you like solving a mystery, this one will keep you working on the solution until the conclusion. Yes, one must work at reading The War of Art; it is not a mystery into which one can slip into the persona of the detective, sharing in the journey of investigation. One does not become, or even desire to become, Melanchthon for the chase; one listens to Melanchthon for he speaks well and has a great deal to say, always stimulating, occasionally provocative. And if you don't like mysteries, The War of Art is still for you if you seek an intellectual adventure. But if you are looking for a bed time story, look elsewhere. In Columbo we know the culprit and the method of dispatch from the opening sequence, then delight in pitting our wits with the macintosh clad detective slowly uncovering the slip ups which announce the culprit's guilt. Even without the benefit of viewing the opening scenes we know the identity of the culprit from Peter Falk's first disheveled appearance. The familiar pattern of Columbo returning to ask question after question of the culprit serves, contradictorily, to draw the viewer into thrall as the evidence of guilt is uncovered. Melanchthon is an apprentice Columbo at best. But Blackpeat has created a style of didactic display personified in Melanchthon's many excursions which draws the reader to turn page after page. The draw of Columbo is the focus on details of the murder, finding inconsistencies in statements, shaping "innocent" questions to elicit those inconsistencies--the many kinds of "How could he have known that?"--and subtleties of seemingly innocuous evidence such as a dustless book on a dust covered table. Blackpeat's creation attracts not for the art of detection but for his protagonist's many voyages of digression. The search for the "Why" and the "Who" provides the mystery's backbone but the process of discovery would be torpid wi

Published by Thriftbooks.com User , 16 years ago
This is a serious, (black) comic literary work with mystery elements - in reach, craft, and spirit, it reminds me of early Thomas Pynchon, specifically THE CRYING OF LOT 49. THE WAR OF ART is about the ongoing, organized devolution of culture since the 1930s; that alone elevates it from the realm of standard detective, thriller, and legal fiction. Mr. Blackpeat's wicked mystery describes the lineage and depth of our current malaise. Rich language further elevates the work. The prose here isn't just good; it's exquisite. The author does a wonderful job of using the "null space" provided by the first person point of view. A reader senses who the protagonist is as much by what is left out as by what is included; by what goes unsaid, but is constantly present: Attorney Melanchton has no life outside his work. He has no physical identity; he is never described, never compares himself to others. He has no romantic or sexual associations, no friends to confide in. When given a problem he attacks it with a sublimating compulsive energy. Despite his erudition and logic (or because of it), he is the perfect, unknowing foil. Great prose. Big ideas. Fascinating intertwining of mystery and history. An intriguingly flawed and unique main character. First novels this good are not to be missed.

Well Worth the Work

Published by Thriftbooks.com User , 16 years ago
This is no ho hum book; it is a piece of work. The War of Art is an erudite mystery novel written by a Washington, DC lawyer, first person through a narrator who is - almost convincingly - a Washington, DC lawyer. Presented as pure entertainment, it is refreshing for anyone who is, or aspires to be, an intellectual, in that it covers ground in the world of 20th Century European art and literature, as well as Classical Greek thought, at a dizzying pace. The premise is not simple: the narrator (identified only as Mr. Melanchthon, which is Greek for Blackpeat, the author's pseudonym) is contacted by a wealthy client who wants to know why ("not who") someone vandalized his original Picasso. The client did not even know this had occurred before being contacted by a mysterious informer, who then diverts the series of bewildering communications to Melanchthon himself. And the chase is on. Blackpeat is a reader's writer. Showing great respect for his reader, he presumes that you know a lot, or at least, that you are a "quick copy" who can learn at the same rate you read. At times, I couldn't keep up with him, although I am a slow reader and fast thinker, so expect a workout. The book is a page-turner, though you will sometimes have to turn the pages backward rather than forward, either to check some event or fact, to recall an impression that must now be revised, or just to figure things out by identifying puzzle pieces in the dense yet agile story line. The character Pursewarden in Lawrence Durrell's Alexandria Quartet said that the artist's job was to "catch every scrap of wind" and Blackpeat catches, scrambles and tosses those scraps for 120 pages before they begin to settle so that you can see the whole picture. But don't be discouraged. I did find myself getting irritated at times by plot twists that appeared more bizarre than artistic. I also struggled with some of the characters: the women are all beautiful and desirable; the men are sinister, inscrutable, or intensely involved in their own incomprehensible subterfuge; and I couldn't always tell whether the narrator was an aristocrat of the spirit or an envious oaf. But the reward at the end was great. No, make that: the reward at the end was enormous! A word about the characters: No characters escape risk; no characters can ever relax. If one may seem serene for a minute, it is just the time it takes to wait for the light to change. The humor in the book (lots!) is based on that Washington, DC lawyer stuff: self-deprecating, type-identifying, emotionally correct or emotionally rectifying, subtly political in tone and stance, very visual, polished and sexy. I am sure there was much I "didn't get," and that others who are more in the know will enjoy even more belly laughs. You also may want to do your homework as you read this book. One of the first names I googled was "Phillip Melanchthon," who, it turns out, was a friend and contemporary of Martin Luther in the first ha

Published by Thriftbooks.com User , 16 years ago
I enjoyed the book. It is a brilliant mix of art and mystery.
Trustpilot
Copyright © 2022 Thriftbooks.com Terms of Use | Privacy Policy | Do Not Sell My Personal Information | Accessibility Statement
ThriftBooks® and the ThriftBooks® logo are registered trademarks of Thrift Books Global, LLC