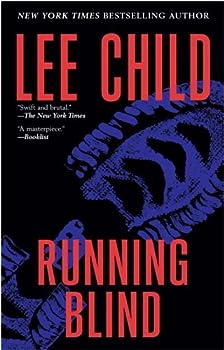 Jack Reacher races to solve the perfect crime in the fourth novel in Lee Child's New York Times bestselling series. Across the country, women are being murdered, victims of a disciplined and clever... This description may be from another edition of this product.

Published by Draig Port , 8 months ago
It’s so frustrating when trying to complete a collection if the book dimensions which are described against the title do not correlate with the books sent out. I have purchased this title twice from you and the same small book version has been sent each time. Trying Amazon now. A lot easier for free return at a local drop-off point if the same happens via their resellers.

Published by collection REACHER , 1 year ago
See above- have a friend who doesn't want to nickel and dime their way to REACHER? almost complete collection sbexguynes@aol.com

Once again the wrong size book was sent. I now have 2 copies of this book from your company that's a

Published by Wrong book , 2 years ago
No review just bummed that once again the wrong size book was sent than what was advertised. Twice now with the same book trying to complete a matching set is proving to be impossible!

Here's the link for Running Blind

Published by Thriftbooks.com User , 15 years ago
My thanks to the other posters for the "Truth in Advertising" warnings that "The Visitor" is really a re-titled "Running Blind". The Jack Reacher series for me is a "buy on sight" type of thing and I might have been misled if it was not for the other reviewers. That being said don't be put off from the original novel by the Publisher's shady marketing. Running Blind is one of the best Jack Reacher novels: Running Blind

Published by Thriftbooks.com User , 16 years ago
Continuing with the Jack Reacher series, I'm up to the 4th installment... Running Blind by Lee Child. Still liking the series a lot, and this one had me guessing until the end... Reacher is coerced into helping out on a case by the FBI. He happened to be in a restaurant when part of a gang came in looking for protection money. Jack took matters into his own hands to break it up, but he also stumbled into an FBI stakeout. Now if he doesn't help solve a potential serial killer, he might end up getting blamed for the deaths. The women being killed all were ex-military and had filed (and won) harassment cases against superiors. Reacher knows them, as he was part of the military police presence that was involved at the time. The women who are dying are all discovered immersed in a bathtub full of camouflage paint, and apparently have gone under voluntarily and without a struggle. No clues, no reason why, but they're still very dead. The FBI is relying on psychological profiling to narrow down the killer, but Jack figures that's all a crock. The struggle is to figure out if they'll listen to him before another victim shows up... Like the other Reacher novels, you're never quite sure who's the good guy and who's the bad guy. I figured there would be a plot twist somewhere, but the one I got wasn't the one I was expecting. Definitely a page turner to see how it's going to unfold. The subplot at play here is the relationship between Jodie (from the 3rd book) and Jack, and whether his foray into the world of responsibility will send him packing back to his nomadic life once again. That came to an interesting point at the end, and I'm curious to see how it will play out in installment #5... Fun read...

Published by Thriftbooks.com User , 22 years ago
I have now read all of the Jack Reacher novels by Lee Child and I believe this one to be the best of them all. Not that it doesn't have flaws - some of the activities carried out by the FBI are pretty questionable, Reacher at times approaches super-human in his skills, and there are probably a few too many red herrings and digressions. Nevertheless, for what it is, this is an extremely fast-moving and exciting thriller. It is genuinely hard to put down and the ending will likely surprise you (though admittedly a careful reader will probably see it coming; there are clues aplenty). Child plays fair, however, and you buy the whole thing. I do wish Child's novels "reached" (pun intended) a wider audience; he is a good writer who has created an interesting and charismatic character. This book is well worth your time.

Jack Reacher the Epitome of Excitement!

Published by Thriftbooks.com User , 22 years ago
I have just finished reading the latest in this great series by English author Lee Child. Just like Killing Floor and Die Trying, this novel flies along at a frantic pace that you try hard to keep up with.Reacher is the suspect in a bizarre series of murders in which ex-army women (who left the force because of a variety of sexual harassment cases) are left naked in their bathtubs filled with green army paint. The killer leaves no clues and what is even more bizarre, they have no idea how the women died.Even after Reacher's name is cleared, he is blackmailed by the FBI into unravelling this bizarre case. He must get to the killer before more women die, or face the consequences of the FBI's fury.Read and Enjoy
Trustpilot
Copyright © 2022 Thriftbooks.com Terms of Use | Privacy Policy | Do Not Sell or Share My Personal Information | Accessibility Statement
ThriftBooks® and the ThriftBooks® logo are registered trademarks of Thrift Books Global, LLC