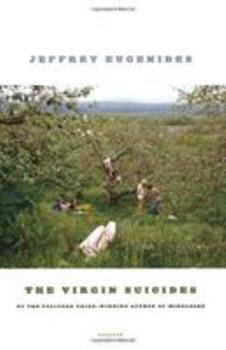 First published in 1993, The Virgin Suicides announced the arrival of a major new American novelist. In a quiet suburb of Detroit, the five Lisbon sisters--beautiful, eccentric, and obsessively watched by the neighborhood boys--commit suicide one by one over the course of a single year. As the boys observe them from afar, transfixed, they piece together the mystery of the family's fatal melancholy, in this hypnotic and unforgettable novel of adolescent...

Litterally made me try to kill myself

Published by Brennan Hill , 11 months ago
259 prescription painkillers later I can safely say that this is my favorite book

Such an effortlessly beautiful book

Published by Anonymous , 1 year ago
The writing is just amazing. Definitely look into the triggers this book contains before reading, but I reccomend! The book came in better condition than I expected.

Published by BookReader , 1 year ago
Ordered the acceptable version and it came in better condition than expected. Had yellow pages but was otherwise perfect.

Published by Thriftbooks.com User , 6 years ago
The prose in this book is so beautifully written that, when paired with its sad, haunting story of lost innocence, creates a dream-like state that leaves you spellbound long after you've finished reading it. Easily one of my all time favorite books.

Obviously, I've been a 13-year-old girl

Published by Thriftbooks.com User , 16 years ago
SPOILERS AHEAD (if it's possible given the title of the book): I love this book but I wonder if anyone, including the author, entirely understands what he has done here. Does he think the deaths of the Lisbon girls mysterious, or is it only his unreliable narrator who thinks it, a man clearly haunted as much by adolescence itself as by five long-dead girls? If you want this to stay mysterious, stop reading now. I'm puzzled that anybody is puzzled why the Lisbon sisters all kill themselves. There are clues all through the book: at the prom, one sister asks if the boys took them out because they felt sorry for them. One reportedly cries when she can't afford to get her messed up teeth fixed, something her parents either can't or won't pay for. One says she feels like a charity child, attending this posh school because her father teaches there. They are describe as wearing last year's school clothes because the mother won't buy them any that fit (which really poor families sometimes do at thrift shops--at least then they're the right size). At the prom, they know their "shapeless sacks" dresses are wrong the minute the other girls look at them. Obviously, as much as the boys idealize and romanticize them, the girls feel like freaks and justthisclose to being outcasts--like the retarded boy the kids make fun of at the party right before Cecilia kills herself. If they don't band together and hide their family's dirty laundy, they'll be openly persecuted instead of just whispered about. Trip dumps Lux not because they had sex, but because she showed emotional vulnerability. "I always screw up," she says--not the stuff the Kewl Girl is supposed to say. The boys don't call after the prom, even though Bonnie's date promises to. They can't trust anyone; no neighbor cares enough to call a Social Worker or truant officer when they're pulled out of school. Aren't they worth rescuing? Apparently not. Why don't they run away? Because their mother has told them all their lives boys only want them for one thing and will lose interest in them. What little experience they have with boys bears this out. They have no reason to believe the outside world will value them when their own parents don't and boys who get to know them even slightly seem to lose interest. They don't fully trust the ones who are crushing on them at the end because they figure they'll just get bored too if the girls don't stay on the pedestal. Bonnie's date won't call her, but he parts his hair the way she liked it when he's middle-aged--he doesn't want a real girl, he wants a fantasy. When Mary commits suicide a month after her sisters died, it's on the day of another girl's debut party--the kind of party to which she will never be invited, let alone give. She can't escape to college because she wasn't allowed to finish high school. And she figures she must be worthless, because after all that, the hospital sent her back home, just as they sent Cecilia home. They s

Published by Thriftbooks.com User , 20 years ago
Wow. What a fabulous, page-turning, fascinating book! It's been two years since I saw the movie, but from what I can remember, the movie doesn't do this book justice. Maybe it is the unique style of the narrative that made me love it so, or the sweet obsession of the narrators...I don't know what exactly, but The Virgin Suicides was simply wonderful despite the morbid subject.Set in 1970s suburbia, The Virgin Suicides tells the story of the Lisbon family from the point of view of a group of boys living in the same neighborhood. Mr. and Mrs. Lisbon are both sort of boring and normal, but their five daughters, Therese, Mary, Bonnie, Lux and Cecilia are exotic and mysterious...so different from their parents, it's hard to imagine how it happened. The story opens with the suicide of Mary, the last in the "year of the suicides" of the five sisters. From there, the story starts at the beginning as seen through the eyes of the neighborhood boys and is compiled through heresay, interviews, diary entries, personal contact, and their avid spying. What is so unique about this story is since it is told from an outside perspective, the answers to many questions remain unanswered, only assumed.The Virgin Suicides takes readers through a year in the life of the Lisbon sisters, their untimely demise, the speculations of the neighborhood, as well as the unraveling of the Lisbon family. A tender, lively story with the ending already known, but fascinating to see how it gets there. I was impressed over and over and highly recommend this profound, moving novel.

In a word: Atmospheric!

Published by Thriftbooks.com User , 21 years ago
From the very title to the opening words of Jeffrey Eugenides' atmospheric novel, you the reader know what you are in for. There is no surprise in the outcome of the book -- and that's the beauty of it. Eugenides instead concentrates on bringing to life the characters, suburban neighborhood and atmosphere of the Lisbon girls and their lives. The novel is about both the sisters and the boys who are infatuated with them. On a personal level I could relate having grown up in suburbia just five house down the block from the beautiful Williams sisters. My friends and I would sit outside their house on the curb dying to know what goes on in those rooms.Eugenides' treatment of the suicides is dark and real. He takes these moments and details them as if they were poetry. Without trying to sound morbid, you seriously will be dying to get to the climax of the novel which takes it's time and occurs with such straighforward description that you can almost hear the ominous music that should accompany the situation. I'm not a literary scholar and I don't pretend to be; I read and finish about 30 books a year (which I think is a goodly amount) and watch a lot of movies; I work as a copywriter in a big city publishing house and am trying to finish my own novel at the same time; and I have to say that this is the BEST book I have ever read. I've never really felt a book as much as this one.

A Haunting Tale Not Nearly as Simple as it Seems

Published by Thriftbooks.com User , 22 years ago
On the surface, the book seems very simple, an American Beauty-esque tale of how modern suburbia is unfulfilling, combined with a sort of coming of age story. It is a unique story, where we never really understand the main characters, while getting to know very minor characters. The story is artistic without losing it's wicked sense of humor or it's entertainment value. Author Jeffrey Eugenides provides far more than a simple story, however; he gives us a multi-dimentional tale with strong undercurrents and quiet symbolism. The book is about the sad fate of the Libson girls, certainly, but on the other hand Eugenides uses the girls merely as a focal point for themes (often using strong symbolism and light subtext) about the place of religion and government, about the nature of humans, about, I might even venture to say, the meaning of life. Consider, as you read, the deeper significance of the reoccuring religious icons, the mini-christ figures, the fate of the neighborhood's elms. The Virgin Suicides is as rife with symbolism and metaphor as Nathaniel Hawthorne's "The Scarlet Letter", but unlike Hawthorne, manages to stay very readable. To have such heavy symbolism and not create a pretentious book is a very difficult balance, but Eugenides pulls it off with nothing short of brilliance. The writing is fluid and the prose beautiful. Eugenide turns the most mundane into the most haunting and beautful, with very Earthy black humor and a strong grasp on reality. The book is both dreamy and true to life, a paradox which perhaps is the greatest strength of the book. Though some may find it's ending somewhat unfulfilling, (for the characters have not really grown from where they started, something that your high shcool english teacher will tell you is imperative for a book) there are libraries full of books that can offer you character growth, and few indeed can offer such appealing prose and such powerful emtotions and ideas as The Virgin Suicides offers. I'm running out of space here, but the bottom line is this: you need to read this book. It's funny, it's tragic, it's powerful, it's true to life. Very few authors can boast a better-crafted first novel. Get the book and find out for yourself.

Published by Thriftbooks.com User , 22 years ago
The Virgin Suicides would seem to be just another tragic tale of American suburbia, but Eugenides transforms it into a unique masterpiece. For starters, the story of the five Lisbon suicides is told from the perspective of an adolescent boy who, along with his friends, is obsessed with the mysterious Lisbon sisters. This gives the book an interesting, and often humorous, perspective on growing up, but only adds to the mystery surrounding the Lisbon house, as the boys have little real information to relate to the reader. One sees the Lisbon house as a depressing place to live, but can never really know its inhabitants. Cecilia's suicide attempt starts the book, but one can never understand why everything surrounding the event is so nonchalant, as though it were a preordained event. Similarly, one never really gets to know the surviving Lisbon sisters; they are all one mold, differentiated by a few images presented in various chapters. With any other author, this lack of character development would be profoundly frustrating, but Eugenides makes it work. One comes to share the obsession the neighborhood boys have for the Lisbon sisters, and the obsession, combined with the mystery surrounding the girls, makes it difficult to put the book down. Eugenides is a brilliant writer, the book is almost flawless, and, at just under 250 pages, it can be read in a sitting. I cannot recommend this title enough.
Trustpilot
Copyright © 2022 Thriftbooks.com Terms of Use | Privacy Policy | Do Not Sell or Share My Personal Information | Accessibility Statement
ThriftBooks® and the ThriftBooks® logo are registered trademarks of Thrift Books Global, LLC