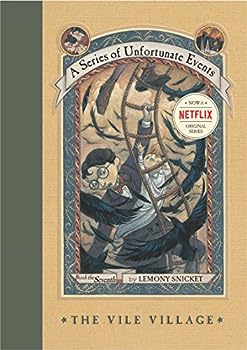 The Vile Village (A Series of Unfortunate Events, No. 7)

(Book #7 in the A Series of Unfortunate Events Series)

NOW A NETFLIX ORIGINAL SERIESDear Reader, You have undoubtedly picked up this book by mistake, so please put it down. Nobody in their right mind would read this particular book about the lives of... This description may be from another edition of this product.

The seventh dreadful book in this hilarious series.

Published by Thriftbooks.com User , 21 years ago
No one wants to be Violet, Klaus, and Sunny Baudelaire. Their chain of unfortunate events keeps continuing, and perhaps has reached its most treacherous event in the lives of the three orphans. Count Olaf and his dastardly new accomplice, Esme Squalor, are on the run. The Quagmire triplets are still missing - and their time just may be running out. Now, the orphans are in the care of the village of V.F.D. - a town with the motto "It takes a village to raise a child." This villageis very, very vile -- there are thousands of ridiculous rules to comply to, and anyone who disobeyes a rule is burned at the stake alive! Then there's the tremendous mob of crows that flock to different places during day and night, blackening the town's sky. The Baudelaires have probably never faced more absurd circumstances. As mysteries and mayhem fill their lives even more, their stay at V.F.D.is becoming worse than they could have ever dreamed. The Vile Village is the seventh book in A Series Of Unfortunate Events, and one of my favorite books in the series so far.

Published by Thriftbooks.com User , 21 years ago
My nine year old and I have had such fun reading this series of unfortunate events! He could well read them himself, but these books have proved to be a real delight for both of us. (I use the term "delight" advisedly, as these books always end badly for the Baudelaire children.) "The Vile Village" was an entertaining next installment in the tales of Count Olaf's treachery. And we actually learned something interesting! I am a 46 year old attorney and had no idea that the correct term for a grouping of crows is a "murder," as in a flock of geese, a pod of whales, a bevy of swans, and a murder of crows! The plot of this book is well summarized elsewhere. I can only add that Lemony did not let us down and we are anticipating the next adventure!

A Great Edition to a Great Series

Published by Thriftbooks.com User , 21 years ago
In "The Vile Village," Snicket is probably at his best since the beginning of the series. In this novel, Sunny, Klaus, and Violet are put off to the village called V.F.D. The orphans go under the program, "It takes a village to raise a child." Hector, the handyman, is their main caretaker. When they get to the village, they have hopes that the mystery of V.F.D. will be solved. Unfortunately, the village and the mystery are not the same. Fortunately, though, the Quagmire triplets are somewhere in the village. The treacherous villain Olaf returns too, but this time doesn't play as big a role as in other books. So, "The Vile Village" is definitely one of the best of the series, and I can't wait to read the six remaing volumes to come. Get this novel if you're a true fan of the series or a minimal series. Somebody that has never even read the prior books can even enjoy this. Buy and enjoy.Happy Reading!

My opinion of The Vile Village and other books by L.S.

Published by Thriftbooks.com User , 21 years ago
I am an avid reader of almost 12 years. I stumbled across The Bad Beginning by Lemony Snicket (I hate that pen name though) and I loved it. I read up to the 7th book and cannot wait for the 8th. These books were refreshingly short and entertaining. A Series of Unfortunate Events tells the long and sad epic, throughout many books, of Violet, Klaus and Sunny Baudelaire whose parents have perished in a house fire and who are left alone with the evil Count Olaf. Each are well developed and unique characters whose abilities come in useful at every turn only to be squashed by the evil doings of Olaf and his troupe. The books get better and better as you go along and meet characters like:~Isadora and Duncan Quagmire, two triplets who are also journalists and poets~Esme Squalor, the fancy pinstriped financial advisor~Vice Principal Nero, the self-proclaimed genius violinist~Sir, whose head is invisible due to a constant cloud of smoke~and many more! Please, try this series out and you will love it. I thouroughly recommend any book in the series to readers of Harry Potter and other magical stories who want a short and simple laugh-out-loud adventure.

Misfortune follows the Baudelaires to their newest home.

Published by Thriftbooks.com User , 21 years ago
Because none of their distant relatives will take them in out of fear of Count Olaf, the three Baudelaire orphans become part of a new program based on the saying "It takes a village to raise a child." Under this program, Violet, Klaus, and Sunny's newest guardians will be all the residents of an entire village. In the hopes of solving the mystery of "V.F.D.," the children choose a village by that name as their new home. But they are terribly disappointed. They are sent to live with a kind but timid man named Hector who loves to cook Mexican food and has a library of forbidden books. V.F.D. is run by the strict Council of Elders, who have made tens of thousands of ridiculous rules that the citizens of the village must follow or risk being burned at the stake. When the Baudelaires are falsely accused of murder and imprisoned, they must escape from the jail and find their friends the Quagmires, who are hidden somewhere in the village. This was another miserable, hilarious book in A Series of Unfortunate Events that is a must-read for all fans of the series.
Trustpilot
Copyright © 2022 Thriftbooks.com Terms of Use | Privacy Policy | Do Not Sell My Personal Information | Cookie Preferences | Accessibility Statement
ThriftBooks® and the ThriftBooks® logo are registered trademarks of Thrift Books Global, LLC