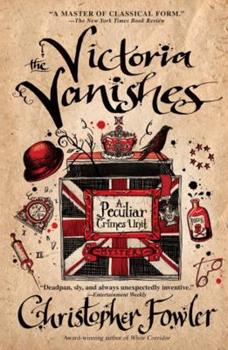 It's a case tailor-made for the Peculiar Crimes Unit. A lonely hearts killer is targeting middle-aged women at some of England's most well-known pubs--including one torn down eighty years ago. What's more, Arthur Bryant happened to see one of the victims only moments before her death at the pub that doesn't exist. Indeed, this case is littered with clues that defy everything the veteran detectives know about the habits of serial killers, the methodology...

British subtle humor and mystery at its best.

Published by Thriftbooks.com User , 12 years ago
If you have even the slightest interest in London, England, or subtle British humor, then Christopher Fowler's characters, along with a wonderful and preposterous mystery, are to be found in this "must read" tome.

Published by Thriftbooks.com User , 13 years ago
Once I got over the British way of writing (punctuation is different and some phrases and slang is unique), I really liked the where he was going. The characters come to life and you're rooting for them all the way through their crisis within a crisis. They are threatening to close down their Special Crimes Unit just as they are getting close to the identity of the serial murderer. They are literaly booted out of their office and left to do their investigation in a living room! But they are good. The murderer is found- even with a disappearing Pub!

This is not a work to be skimmed on the bus, but rather to be read in the quiet of solitude

Published by Thriftbooks.com User , 13 years ago
The Peculiar Crimes Unit (PCU) mystery series by Christopher Fowler is one of a kind. Unapologetically British, one finds elements of Sherlock Holmes, Hercule Poirot, James Bond, "The Avengers" and "Danger Mouse" circulating throughout the books, yet the concept is delightfully unique. The PCU is a division of the London Metropolitan Police Department, which has been in existence for over 60 years. Arthur Bryant and John May, its stalwart, eccentric detectives, have been at the de facto helm for more or less the entire time, riding herd over a group of square but interesting pegs who can't fit in anywhere else. In THE VICTORIA VANISHES, middle-aged women are turning up dead in London pubs. The manner of their deaths --- the administration of a painless, extremely quick-acting poison --- is puzzling as well. What is confounding is that Bryant appears to have been the last person to see one of the victims alive, outside of a pub that had been demolished some 80 years previously. He is at a loss. Already coming to doubt the veracity of his observational faculties, he is seriously contemplating retirement. As with so many of their other investigations, the sheer volume of Bryant and May's case history, and Bryant's encyclopedic if arcane body of knowledge --- hampered only by his sporadic though temporary memory lapses --- ultimately win the day. There is a bit of logic to this, given that, in their world, Bryant and May have been investigating cases for over six decades in one location. Elements of past and present cases dovetail, cross over, dip and swirl, and fall back on themselves. But in this book, when the identity of the murderer is revealed and the cad is apprehended, Bryant is not done. There are some unanswered questions that deal not so much with the murderer's motivation --- that is all too clear --- but with what, or who, wound him up and pointed him toward these particular victims. And what about that vanishing pub? THE VICTORIA VANISHES is one of those rare books in which the real excitement begins after the murderer is brought to justice. And talk about multiple endings! Fans of the series will be screaming, jumping up and down, unable to believe what they are reading by the time they reach the conclusion. I had to read the ending a couple of times before it sunk in that Fowler indeed was actually carrying out an act that had been hinted at since the beginning of the series. Or is he? That is but one of the many attractions of these novels, which are as delightfully and insidiously addicting as a serotonin supplement. Fowler makes demands on the reader: the plots are complex, the characters are multi-faceted, and the humor is fast, furious and subtle. This is not a work to be skimmed on the bus, but rather to be read in the quiet of solitude so that every word, sentence and nuance can be fully appreciated alone and within context. --- Reviewed by Joe Hartlaub

Published by Thriftbooks.com User , 13 years ago
Christopher Fowler's Peculiar Crimes Unit mysteries are always satisfying and feature great characters and interesting plots. He has definitely raised the bar with his latest effort in this series - "The Victoria Vanishes". The title refers to a bar that is suddenly not there. The only trouble is that this bar was the scene of a crime - a crime that ends up being one in a string of serial murders. The crimes and the missing bar somehow tie into British pub history as well as a missing religious artifact of biblical significance. The reason that this novel stands out is that the chracters of the PCU are so well written - with great interaction - that the crime they are working on is almost an interference. I wanted to spend more time with these characters and hope that Christopher Fowler continues to allow me to do so. Well done!

What shall I do without Bryant and May?

Published by Thriftbooks.com User , 14 years ago
First Sentence: She had four and a half minutes left to live. Pathologist Oswald Finch is dead, May has been diagnosed with a tumor on his heart and Bryant has submitted his resignation letter. On his way home from Finch's wake, Bryant notices a woman going into a pub. The woman is later found dead and when they go to investigate, the pub is gone. In fact, it had been torn down over 75 years ago. But someone is killing women in, or near, pubs not usually their own. The principal appeal of this book is the relationship between the characters, particularly Bryant and Mays, the bantering dialogue and the humor. We learn much more about the characters backgrounds. But it is also the insightful musing of the author and the characters that made this book stand apart from the rest. There is a fascinating look at and history of some of London's pubs but also thoughts on London past and present and the value of an historic perspective. Fowler's descriptions create powerful visual images. There is also a very good, suspenseful mystery. Just when you think the mystery is solved, there is a second layer to it. There is a highly unlikely element and one significant proofreading error, but those did not detract from my absolute enjoyment of this book, which made me laugh, think and, in some ways, touched my heart. This appears to be the final book in the Bryant and Mays series. I have loved this series and shall miss it.
Trustpilot
Copyright © 2022 Thriftbooks.com Terms of Use | Privacy Policy | Do Not Sell or Share My Personal Information | Accessibility Statement
ThriftBooks® and the ThriftBooks® logo are registered trademarks of Thrift Books Global, LLC