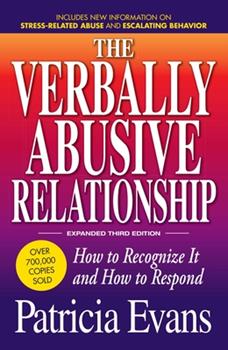 The Verbally Abusive Relationship, Expanded Third Edition: How to Recognize It and How to Respond

You deserve respect. In this fully expanded and updated third edition of the bestselling classic, you learn why verbal abuse is more widespread than ever, and how you can deal with it. You'll get more of the answers you need to recognize abuse when it happens, respond to abusers safely and appropriately, and most important, lead a happier, healthier life. In two all-new chapters, Evans reveals the Outside Stresses driving the rise in verbal abuse...

Published by Nicole , 2 years ago
This book really helped me realize what I am really dealing with. I am so glad I bought this book!

Finally, it all made sense!

Published by Thriftbooks.com User , 22 years ago
After almost 15 years of being married to an "Anger Addict" (as described in the book), I went to my doctor begging for a prescription for Prozac. After careful and wise probing, she gave me the prescription, but also strongly suggested I read this book. I read it on Monday, I filed for divorce on Friday. Finally, after years of trying EVERYTHING I understood why I was exhausted, hopeless, and no closer to the solution than the day I got married. This book helped me realize: It wasn't all my fault. I could never be perfect enough to stop the verbal "rages". He would have to be willing to seek counseling/therapy in order for the verbal abuse to stop (which he consistently refused to do). And, most importantly, it let me know that the verbal abuse really was doing serious, long-term damage to me as a person. I always thought if he would just "hit me" then I could leave. I learned he'd been "hitting me" (so to speak) for years. If you even THINK you might be in a verbally abusive relationship (it's not always obvious when you're in the middle of it), I highly recommend you read this book. I finally have a peaceful, content life: due in part to the courage and understanding I gained from reading it. And I didn't have to use that Prozac prescription!

This book saved my sanity

Published by Thriftbooks.com User , 25 years ago
I was in a relationship for 3 years that during the entire time, I was confused as to why I felt the way I did even though 'he' never did anything and I was 'just imagining things'. Well, my friends gave me this book and I was stunned. I thought verbal abuse was very obvious to the victim--like yelling or sarcastic remarks. Well it's not and unfortunately I experienced all forms of it in my relationship. It can be subtle abuse or outright. It can make you feel like you're insane. Normal conversation can erupt into the verbal abuser accusing you of meaning something you never meant, then he denies ever getting mad, you repeat what he first said and he denies ever saying and says you're just picking a fight, etc. If this has ever happened then read this book--it will save your sanity. I cannot begin to describe how helpful this book has been. Verbal abuse comes in many forms--and the abuser will always deny they did anything wrong and will blame you for everything. Don't be conned anymore by the abuser into putting up with their abuse because 'it's your problem and you need to work on yourself'. It's not true--they have the big problem, you need to recognize it, protect yourself, and if it's bad enough leave the relationship. There is an entire chapter on how to respond to the different forms of abuse. So if it's your mother you can finally stand up without giving in to the guilt. I have recommended this book to many, many people. I wish I had read this years ago so I would have never put up with what I did. If you can recognize it, you can stay away from it. This will expain what is going on with them--finally someone who explains what is happening! I think this should be required reading in highschool so everyone can stay clear from these people. Get it! Now
Trustpilot
Copyright © 2022 Thriftbooks.com Terms of Use | Privacy Policy | Do Not Sell My Personal Information | Cookie Preferences | Accessibility Statement
ThriftBooks® and the ThriftBooks® logo are registered trademarks of Thrift Books Global, LLC