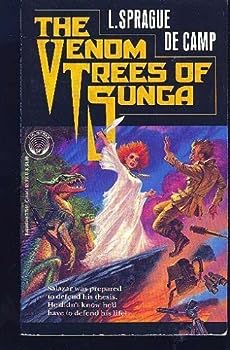 The Venom Trees of Sunga

(Book #9 in the Viagens Interplanetarias Series)

Embroiled in his field work in the arboreal world of Sunga, biologist Kirk Salazar must put up with hard-core tourists, an ignorant industrialist, and Alexis Ritter, the formidable high priestess of a... This description may be from another edition of this product.

Published by Thriftbooks.com User , 21 years ago
Kirk Salazar represents the typical de Camp approach to a book: rather than a big, brawny hero, Kirk is a scholar, short and intellectual, set apon the task of figuring out the way the branch climbing kusis manage to live amoung the venom trees in the island of Sunga on the Kukulcan planet. The venom trees having adopted a defense of spraying acid at dangers, including people.An easy enough task except for the intervention of people, from a land developer who simply wants to cut the forest down for lumber to a quasi-preistess come to reside among a back-to nature cult in the same area. The local dinosauroid natives simply add flavor to the typical mix up of different people striving for different goals, none of which match.Too bad so few books were written in the setting. It has the classical semi-barbaric atmosphere of old novels (steam engines, great lizards, jungle) with modern themes and prose the reader can relate to.
Trustpilot
Copyright © 2022 Thriftbooks.com Terms of Use | Privacy Policy | Do Not Sell My Personal Information | Cookie Preferences | Accessibility Statement
ThriftBooks® and the ThriftBooks® logo are registered trademarks of Thrift Books Global, LLC