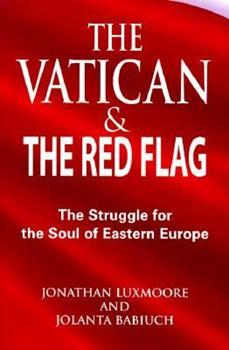 The Vatican and the Red Flag: The Struggle for the Soul of Eastern Europe

This work tells the story of the Catholic Church's confrontation with communism, from the French Revolution onwards, but with particular emphasis on the post-War period. It sets out new evidence of how successive Popes unwittingly helped communism expand. Interwoven with this narrative is the life-story of Karol Woytyla, who as Pope John Paul II is the first Eastern European Pope to sit on the throne of Peter.

Published by Thriftbooks.com User , 20 years ago
No review can indicate this survey's range: a range achieved without waste of wood pulp, since at 351 dense pages - including lavish footnote references - the publication is decidedly on the epigrammatic side. Repeatedly our authors compel reassessments of figures we thought we knew. (One example among a dozen: those naïve Anglo-Saxons who still envisage Tomás Masaryk as some sort of cuddly rationalist teddy-bear, Barry-Jones-style, will receive instructive surprises from his vengeful atheistic snarls.) Occasional factual errors disfigure the text. The authors misdate by six years America's diplomatic recognition of the USSR; while Admiral Horthy, here described as Lutheran, was actually (like most Hungarian Protestants) Calvinist. A second edition, though, can repair these mistakes; and a second edition there should certainly be. Of The Vatican and the Red Flag, as of precious little other modern historiography, it can be said: read it, or risk being exposed as forever unfit to discourse upon its subject.

excellent precis of the vatican's struggle with communism

Published by Thriftbooks.com User , 22 years ago
luxmoore writes clearly about the 50 year struggle between organized religion (particularly the catholic church) and the soviet satraps that ran eastern europe between yalta and the fall of the berlin wall. he approaches the topic from the perspective of the local church on the ground. the vatican attempts at ostpolitik, so applauded in the west, are seen as treachery by the priests and faithful under the soviet boot.the authors describe the vatican approach to the "struggling church" in eastern europe. what was meant to happen versus what actually happened. the church's diplomats are seen to be naive at best in dealing with the communists. proves the point that divine intervention supported the church behind the iron curtain.the tremendous rebuilding job for the newly freed churches is identified, and the diecrete steps taken so far are analyzed. the role of the current pope's philosophy and apologetics as the backbone of resistance to the communist onslaught is woven throughout the book.probably as good as a recap of this struggle as we will see in the next several years. luxmoore is a long time observer of the catholic church in eastern europe for the tablet out of london.
Copyright © 2020 Thriftbooks.com Terms of Use | Privacy Policy | Do Not Sell My Personal Information | Accessibility Statement
ThriftBooks® and the ThriftBooks® logo are registered trademarks of Thrift Books Global, LLC