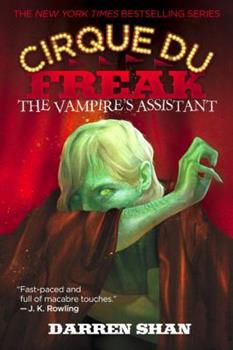 In the tradition of Ray Bradbury's Something Wicked This Way Comes, and Stephen King's Salem's Lot , the nightmare continues for the new vampire's assistant in the popular Saga of Darren Shan. Darren Shan was just an ordinary schoolboy until his visit to the Cirque Du Freak. Now, as he struggles with his new life as a Vampire's Assistant, he tries desperately to resist the one temptation that sickens him, the one thing that can keep him alive. But...

Published by Alexandria , 2 years ago
I love the series, but this "acceptable" condition book literally has a sticker on it and in it saying "discard" There's tape holding the book together. The binding is coming out. I don't understand how this can be considered "acceptable" I've ordered acceptable condition books before and they definitely looked better than this. Still love the site and still gonna use it but geez this copy is in bad condition. This book is better than the first in writing.

Better than the first!

Published by Thriftbooks.com User , 19 years ago
I just finished reading The Vampire's Assistant, and I found myself more than satisfied. I have to agree with many reviewers here: this book was better than the first.The book starts were the first book left off. Darren, now half-vampire, travels with Mr. Crespley from place to place. Crespley urges Darren to drink human blood, for no vampire (not even half) can survive without it. Even though Darren doesn't have to kill his victim, he doesn't relent. He will drink animal blood but not human. He wants to keep his humanity.Mr. Crespley and Darren go back to Cirque Du Freak, so Darren have friends and be with people who understand him more. He befriends Evra, the snake boy in the first book, and two humans, Sam and R.V. Darren grows close to Sam, but their friendship is soon in jeopardy when tragedy strikes and leaves Sam (and others) in danger. As said, this book was better than the first. We learn more about chracters like Mr. Crespley, Mr. Tall, all the other freak members. This book has more excitment, suspsense, and dept than the first one (but I did enjoy the first one immensely). For fans of the first one, you definitely don't want to miss this installment!

Published by Thriftbooks.com User , 19 years ago
This book is the sequel of Cirque Du Freak A Living Nightmare. Darren Shan still has a problem of drinking human blood, and human blood is something that vampire's have to drink once a month, or they will become pale and die after awhile. They cannot just survive off of animal blood. Darren Shan can't play with any of his friends, because he can hurt someone. So he joins Cirque Du Freak. There, he meets many strange humans and creatures such as the wolfman, so dangerous that it has to be locked up in a cage with chains tied to him. There is a boy about the same age as Darren and has a pet snake and is sort of a snake himself. They also meet a boy who lives near by. There is also a nature specialist, someone who cares for animals and the environment. The environmental person hears about Cirque Du Freak and comes to investigate. Then he calls the police. But before he calls, he does a little handiwork himself. He sees the wolfman and starts to clip the heavy chains off the wolfman. Darren sees him and tries to stop him . So Darren sticks the person's hand into the cage and the wolfman bites it right off. He yells, "Where are my hands, what did you do to my hands,where are my hands!!!",then runs off into the woods. The third book is to come out at April and is called, the Tunnels of Blood.Why I recommend this book is because it is as scary as the first. There are even better cliff-hangers. This book keeps you from doing anything else until you are finished with it. It also makes make-believe characters come to life as you read it. It is also one of the best books that I have ever read in my life. That is why I recommend this book.My favorite part of the story is when the nature specialist comes to Cirque Du Freak and cuts the chains off the wolfman. Then the wolfman bites the guys hands right off, leaving the bone showing at the elbow, while he yells, "Where are my hands!!!" The wolfman then escapes and runs wild. But Mr. Crepsley, a vampire catches him and put it back in the cage.

Published by Thriftbooks.com User , 20 years ago
"The Vampire's Assistant," book 2 in Darren Shan's Saga, starts two months after the first one leaves off. Darren and Mr. Crepsley (spelling?) return to the Cirque Du Freak, and the terror starts!!! I liked it even better than the first. I can not wait till book 3 comes out. And yes, this one also has the dreadful last three words, TO BE CONTINUED. I reccommend this book to anyone who has read "Cirque Du Freak" and enjoyed it.

Even better than the first...

Published by Thriftbooks.com User , 20 years ago
Darren Shan's existence as a human is over. When he sacrificed himself to save his friend his life was destined to change forever. Now a half-vampire, Darren is forced to abandon his family and friends to travel as an assistant to Mr Crepsley. Already struggling to come to terms with what he has left behind, Darren is now about to face a new dilemma, because animal blood alone is not enough to keep him alive and despite Mr Crepsley's concerns, he refuses to betray the person he used to be by drinking from a human. Returning to the Freak show where his nightmare began, Darren soon strikes up a friendship with Evra, the snake boy and a local kid named Sam. When it seems to Darren that his life is finally taking a turn for the better, tragedy strikes and he is forced to make a choice that will change him forever...After reading "Cirque du Freak", the first instalment in the saga of Darren Shan, I was hoping that these books weren't just Goosebumps for older readers, and now The Vampire's Assistant has proved to me that they definitely are not. If anything, I enjoyed it even more than the first part of the series. Easy and fun to read, The Vampire's assistant, like its predecessor is one of those books that you read straight through, rush to finish and find out what happens, and then feel sorry when it's over. The main character, Darren is a narrator who is easy to like and identify with as he struggles to come to terms with what he has become. New characters are introduced and are even more vivid and interesting than those revealed in "Cirque du Freak". This was an enjoyable, action-packed book that is difficult to put down and should appeal to adults and kids alike. Having read #3 Tunnels of blood and #4 Vampire Mountain, I can safely say that this series just keeps on getting better and better. I definitely recommend this to anyone who enjoyed "Cirque du Freak" - you won't be disappointed.~Jenna~

A Word From The Author

Published by Thriftbooks.com User , 20 years ago
Have you ever thought what it would be like to become a vampire? In most movies and books it's simple: if you join the ranks of the walking dead, you turn into an evil monster who loves to drink blood. But what if vampires weren't evil? What if you were to hold onto your humanity when you changed, but needed to drink blood to survive? Could you bring yourself to attack a fellow human being ... to bite them ... to drink from their veins? This is the key problem Darren Shan faces in the second book of his Saga, THE VAMPIRE'S ASSISTANT. As Mr Crepsley's assistant, he must tend to the needs of his master. But Darren has needs too -- he needs B*L*O*O*D! Can he bring himself to drink, or will he cling to his principles ... and DIE? Join him - and others, including the performers of the Cirque Du Freak, such as the Snake Boy and Cormac Limbs - inside the pages of THE VAMPIRE'S ASSISTANT and find out. But be warned: blood WILL be shed in its gruesomely fierce finale ...
Copyright © 2020 Thriftbooks.com Terms of Use | Privacy Policy | Do Not Sell My Personal Information | Accessibility Statement
ThriftBooks® and the ThriftBooks® logo are registered trademarks of Thrift Books Global, LLC