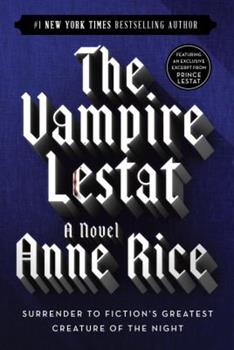 (Book #2 in the The Vampire Chronicles Series)

#1 New York Times Bestselling author - Surrender to fiction's greatest creature of the night - Book II of the Vampire Chronicles The vampire hero of Anne Rice's enthralling novel is a creature of the darkest and richest imagination. Once an aristocrat in the heady days of pre-revolutionary France, now a rock star in the demonic, shimmering 1980s, he rushes through the centuries in search of others like him, seeking answers to the mystery of his eternal,...

Published by Dangerlucas , 2 years ago
Came in the mail quick and was in very good shape.

Published by Thriftbooks.com User , 2 years ago
The cover I had chosen wasn’t the one they delivered it’s kind of disappointing. I’m still keeping the book since it was a low price but still plan on looking for that cover I originally wanted.

Published by Thriftbooks.com User , 19 years ago
The books takes yoiu back in time and we see the history behind Lestat. What makes him tick. It shows us his compasionate side as well as his cruel and devilish personality that we have all grown to love.

Inside view behind the vampire...

Published by Thriftbooks.com User , 19 years ago
The stroy behind Lestat and why he is the way he is. his grim view of the world and the tender side of him rarely seen. In The Vampire Lestat we enter his world, his mind set, his past. What makes Lestat, "Lestat".

Published by Thriftbooks.com User , 19 years ago
If Anne Rice had never written another book after "The Vampire Lestat," her reputation as a rare genius would have been created and sealed with this one novel.Unlike most Rice fans, I read this book first, and it has always been my favorite of all the Vampire Chronicls, much more so than "Interview with a Vampire."I cannot count how many times I have reread this book, and with each reading, I find a new richness, a new insight, a new awe-inspiring peak into the mind of a woman whose genius may be madness, but with whom I will gladly cross the line. (Case in point: This is the only book ever for which I stood in line for hours to have the author inscribe her name.)I won't belabor the plot here; it is simply too baroque to try to put into simple words. Suffice to say that, in the first person, we meet Lestat, the teenaged son of an impoverished 18th-century nobleman, whose life is at best cold and harsh, at worst, a constant battle with cruelty of every sort for one's mere survival. One particularly dark and fiercely cold night, Lestat, a beautiful young man despite all his hardships, is out with his beloved dogs, hunting wolves. Into the strange fog he rides...and when he first hears the deep, surreal, and otherworldly voice calling him..."Wolf killer, wolf killer," we are there with him. And we are by his side as he becomes, in a strangely but riveting erotic passage, one of the undead. A vampire unto eternity.All of Anne Rice's intensity, her eroticism, her love of history, her incredible sense of detail, and her dark view of the world is present in this book, much more so than "Interview with a Vampire."It is my suggestion that, if you want to sample Anne Rice, and have never read any of her works, this may be the book you want to read. And if you know Rice's works but not this particular novel, I urge you not to deny yourself another minute. This is truly one of the must-reads of one's life.

The Vampire Lestat is a sensual, psychological thriller!

Published by Thriftbooks.com User , 23 years ago
This book is simply excellent! Lestat is a vampire you soon learn to love. He is beautiful, and yet deadly. Another thing-Lestat always makes it in the end-unlike every other Vampire book. To all you other vampire lovers-this one's for you! It gets a little confusing in a few areas, but Anne Rice brings you right into the book with Lestat-like you're right there with him. You would think there would need to be a lot of physical sex for it to be good, but this has very little of it, and the sensuality level is still high. I love this book! @-->-- :)
Copyright © 2020 Thriftbooks.com Terms of Use | Privacy Policy | Do Not Sell My Personal Information | Accessibility Statement
ThriftBooks® and the ThriftBooks® logo are registered trademarks of Thrift Books Global, LLC