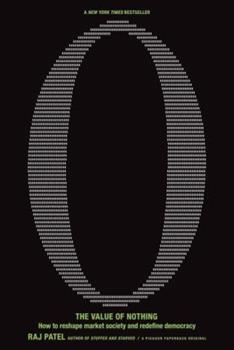 The Value of Nothing: How to Reshape Market Society and Redefine Democracy

"A deeply though-provoking book about the dramatic changes we must make to save the planet from financial madness."--Naomi Klein, author of The Shock Doctrine Opening with Oscar Wilde's observation that "nowadays people know the price of everything and the value of nothing," Patel shows how our faith in prices as a way of valuing the world is misplaced. He reveals the hidden ecological and social costs of a hamburger (as much as $200), and asks how...

Published by Thriftbooks.com User , 12 years ago
As a self-styled amateur, underground economist, I've been looking for a book like Raj Patel's that knowledgeably describes the processes that lead to our recent economic collapse and then offers us a chance to shift our way of thinking so as to create a different outcome in the future. I fear that without implementing some of these changes--which entail shifting the way we see the world and value its components--the world economy is headed for another, and worse, collapse. The Value of Nothing is unflinching but hopeful. It is detailed and informed but centered on the big picture--on changes that can actually free us from our current muck. And its vivid, fast moving and a pleasure to read. An excellent and important book on a very important subject.

A triumph of democratic thinking

Published by Thriftbooks.com User , 12 years ago
An eye-opening and surprisingly upbeat account of democratic responses to economic crisis, The Value of Nothing is a must-read for all of us white-knuckling our way through ongoing economic turmoil, beset by private economic woes and baffled by public policies bolstering the institutions that failed us. While free-market die-hards blithely rationalize the latest economic absurdities - billion-dollar bailouts, disappearing pension funds, alarming poverty growth rates in first-world nations - with the spectacularly unreassuring mantra "it's all cyclical," Dr. Patel establishes the foundations for lasting economic reform in The Value of Nothing. From Minneapolis citizen-policy-makers to self-organized shack-dwellers' communities in Durban, South Africa, Patel finds citizens' groups taking the initiative to meet community needs, instead of waiting for markets to distribute Invisible Handouts. A veteran of the World Bank and World Trade Organization, Patel has a deep understanding of our global economic system and keen awareness of its shortcomings. But The Value of Nothing is not a dire screed about inevitable economic failures: it's a constructive critique of obviously flawed systems, and an inspiring testament to the power of democracy to improve our shared economic fates. With creative problem-solving and evident compassion, The Value of Nothing is a rare example of clear, constructive thinking in the midst of a devastating crisis. Far from a dismal scientist, Patel emerges as an economic reformer of the first order, and a global thought leader worth following.

Patel Peers Past the Tedious Trivia

Published by Thriftbooks.com User , 12 years ago
This is one of the few books that escorts the reader beyond the negativism and despair of the modern world. Raj Patel sees our global circumstances with depth, with breath, and with a vision for the future that the thinking readers among us crave. And yet, this is no simplistic cookbook for improving things. Patel does offer flimsy lists of "sure-fire" ways to save (fill in the blank with the global cause of your choice.)Instead, he offers up the rules of the game for the coming century, and they are fair and logical. Finally, a sense of humor is a good thing, especially in serious matters. The fact that Patel was invited to appear on "The Colbert Report" indicates that he has a solid enough grasp of his subject that he can joke with us even as his concerns are real. This is the book that you will give to your thoughtful friends and relatives for the next year. Count on it.

A must read for everyone!

Published by Thriftbooks.com User , 12 years ago
Writing in an accessible, jocular manner, Raj Patel takes on a very serious topic--the world economy--and offers a clear picture of what's gone wrong and how we can make it right for everyone. In a time where the choices we make have a direct impact on next generations, The Value of Nothing offers plenty of food for thought as well solutions for considered action on the way to creating sustainable economy and society. A MUST READ for everyone!!

Readers will enjoy or detest based on their political ideology, but Patel makes great points!

Published by Thriftbooks.com User , 12 years ago
"The Value of Nothing" follows on the heels of a number of books arguing the need for societies to re-evaluate themselves in a multitude of ways. A veritable cottage industry of such books have popped up in recent months including $20 Per Gallon: How the Inevitable Rise in the Price of Gasoline Will Change Our Lives for the Better, Food Inc.: A Participant Guide: How Industrial Food is Making Us Sicker, Fatter, and Poorer-And What You Can Do About It,Free: The Future of a Radical Price, and many others which point at our need to fundamentally reassess our way of doing business. While those books looked as small aspects of needed change, such as more efficient use of oil, inefficiencies and problems in the food industry, and digitization and file sharing, in "The Value of Nothing" Raj Patel instead takes a shot at the drastic and rather dramatic changes societies need to make to ensure their future success and survival. While ostensibly about finance and economics, Patel's work touches on virtually every aspect of modern society and does so in a language that is easily comprehended by non-specialists and lay people alike. Patel's explanation of how and why the economy collapsed is perhaps the most cogent and concise I've yet read to date, something he did so well with his prior book Stuffed and Starved: The Hidden Battle for the World Food System, which looked at the problems of the global food supply system. Picking up on that theme Patel argues that the prices consumers pay doesn't reflect the true cost of producing that item as there are hidden ecological and social costs not reflected in the item itself. Nations with lax environmental laws incur considerable damage to their ecosystem they will have to contend with at some future point, and which in the interim can cause immediate harm. Patel argues persuasively for greater economic equality and a more sustainable economy, but therein lies the problem: it requires greater engagement and lobbying by the public. Patel's argument will likely resonate with Progressives who are lobbying for just these sort of reforms, but it will be anathema to Conservatives who argue that the economy needs less regulation rather than more. Like many recent books "The Value of Nothing" is either preaching to the choir or falling on deaf ears. Hopefully people can set aside partisan doctrine, pick up a copy, read it, and form their own opinions. I read this at the same time as The Spirit Level: Why Greater Equality Makes Societies Stronger and found them to be great compliments to each other. Both should provide some compelling arguments for fundamental reform.
Copyright © 2022 Thriftbooks.com Terms of Use | Privacy Policy | Do Not Sell My Personal Information | Accessibility Statement
ThriftBooks® and the ThriftBooks® logo are registered trademarks of Thrift Books Global, LLC