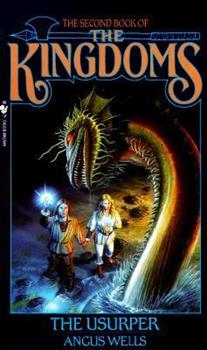 The Usurper: The Second Book of The Kingdoms

(Book #2 in the The Book of The Kingdoms Series)

Kedryn, the young prince prophesied the sacred Book of Kyrie, has led the Three Kingdoms to victory over the barbaric northern Hordes commanded by the demonic Taws, the fire-born Messenger of the war-god Ashar. But victory had a terrible price. Kedryn was blinded by an ensorcelled sword in his hour of triumph. Now he must journey into the abode of the dead, accompanied by his beloved Wynett, on a perilous quest to confront the shade of the warrior...

Published by Thriftbooks.com User , 12 years ago
A really nice conclusion to the first book, Wells continues to weave his story tightly and imaginatively. I'll admit, I wasn't as interested in the plotline of the Usurper, but that's because I was more interested in the love story Wells laid out. Not that the end was really in doubt, but it was very enjoyable watching the two characters get there. Again, Wells uses excellent description, if sometimes using vocabulary the average reader may find daunting. I'm a fan of letting your reading educate you, so I don't count it as too much of a negative. Wells occasionally uses the "little did he know" motif as clumsy foreshadowing, or to create suspense, but I find such technique irritating. Thankfully, he does it much less than in his later Godwars trilogy. The Usurper also has a sense of suspense and intrigue, combining, quest, love story, and political machinations into one compelling story. I'm a little curious as to where the story will go next, since the ending seems rather conclusive, but I'm sure the last book in the series will be entertaining and enlightening.

Published by Thriftbooks.com User , 21 years ago
This novel picks up where "Wrath of Ashar" left off. While not as popular as other mainstream fantasy novels, this is truly a splendid example of what great writing can go into the genre. Filled with intrigue and a deep plot drama, I would recommend this novel to anyone with a taste for good authorship and fantasy.
Copyright © 2020 Thriftbooks.com Terms of Use | Privacy Policy | Do Not Sell My Personal Information | Accessibility Statement
ThriftBooks® and the ThriftBooks® logo are registered trademarks of Thrift Books Global, LLC