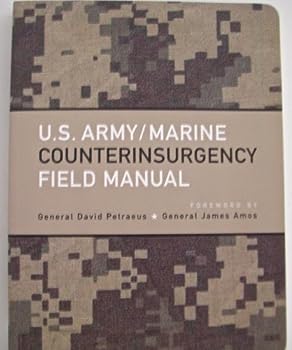 When the U.S. military invaded Iraq, it lacked a common understanding of the problems inherent in counterinsurgency campaigns. It had neither studied them, nor developed doctrine and tactics to deal... This description may be from another edition of this product.

Knowledge of this is power

Published by Thriftbooks.com User , 13 years ago
A broad look, but the thoughtful revolutionary leaders will want the most intimate understanding of this material before he heads for the mountains, as this is proven doctrine now. This is the way the US military leadership (all levels) will behave. Need to fill in the blanks with the training and tactical manuals from Ranger school for specific issues on which to focus.

Published by Thriftbooks.com User , 14 years ago
Gen. Petraeus is a smart man, and a wise soldier; the most reassuring thing about reading this book and knowing he's in charge right now in Iraq is that this work shows he knows the limits of armed power, and right where those boundaries are. He doesn't try to say a 19 year old with a gun can solve everything, or that a Ranger trained sergeant can do whatever is called for -- but they can do certain things very well that have to be resolved before the suits and shovels can be deployed. Petraeus may not have written the whole thing, but knowing he was integrally involved with the text and uses it with his command and control structures is the most reassuring thing i've heard about Iraq in years.

Interesting and important work on counterinsurgency

Published by Thriftbooks.com User , 14 years ago
The context for this important work (John Nagl's Foreword, Page xiii): ". . .the sad fact is that when an insurgency began in Iraq in the late summer of 2003, the Army was unprepared to fight it." In the "Introduction," Sarah Sewall observes the critical point of counterinsurgency (COIN) (Page xxiii): ". . .although it is military doctrine, the field manual emphasizes the multiple dimensions of COIN: `those military, paramilitary, political, economic, psychological, and civic actions taken by a government to defeat an insurgency.'" Traditional US COIN policy was unwisely military only--ignoring the many other dimensions. Obviously, one of the most arresting features of this volume is one of its authors--General David Petraeus. At the outset, this book emphasizes the competitive learning struggle between insurgent and counterinsurgent. The manual says that (Page lii) ". . .the side that learns faster and adapts more rapidly--the better learning organization--usually wins." The first chapter explores insurgency and counterinsurgency, concluding with a series of lessons for governments as they "take on" an insurgency. Page 51 features a Table outlining successful operational practices (e.g., emphasize intelligence, isolate insurgents from the population, protect key infrastructure, provide amnesty for those willing to support the new government) and those that are not normally successful (e.g., overemphasizing killing and capturing the enemy as opposed to engaging the populace as a whole, ignore peacetime processes, including legal procedures). The first chapter also features a number of pithy points that might seem counterintuitive (e.g., "if a tactic works this week, it might not work next week"; "sometime doing nothing is the best reaction"). Other key chapters focus on the need to have unity between civilian and military activities (counterinsurgency fails if it is carried out as a military approach only), the requirement for good intelligence, leadership and ethics in counterinsurgency. Some of the more interesting aspects of this book are located in the several appendices. One focuses on the support of linguists in COIN; intriguing, too, is a section on legal considerations in COIN. For some readers, this might be uncomfortable reading, given its focus on warfare. On the other hand, COIN is a reality and a method for combating insurgencies. The book is pretty well written; for the most part, it is also clearly written. It is fascinating to see the author rise in the ranks, partly as a result of his perspective as laid out in this work.

Published by Thriftbooks.com User , 14 years ago
This book has become famous or notorious (take you pick) because it was written under the direction of Gen. David H. Petraeus, as of this review the commanding general of American forces in Iraq. I want to prescind from the Iraq question and address the book on its own merits. First, my qualifications. I am a retired Air Force Colonel (non-flying). During the Vietnam war I was heavily involved in Operations Research on counterinsurgency. For five years I was Chairman of the Special Warfare Working Group of the Military Operations Research Society. I spent 20 months in Thailand and Vietnam, running tests on electronic equipment for use by US and allied forces battling insurgents, and gathering and analyzing data on insurgency in Vietnam and Laos. What's in this book? Chapter One is a historical survey of insurgency and the problems of countering it. It draws heavily from the Vietnam experience, but goes as far back as the ethnic struggles in England (Welsh, Scots, Irish) against the Crown. While the historical coverage is broad, it does not, and is not intended to, give coverage in depth. Chapter Two discusses the need for integration of the civilian and military activities in counterinsurgency. What's new about this? Nothing. I wrote the same things (though perhaps not as well) while in Southeast Asia over forty years ago. The fact that it's not new doesn't mean it's not important. It's critical. The fact that it's now in a Field Manual is highly significant. Chapter Three deals with intelligence gathering in counterinsurgency. While the military commander is always in need of intelligence about the enemy (who, where, what, when), the problems of gathering this intelligence for counterinsurgency are very different from those of conventional war. This chapter is heavy on the "what" of intelligence, but a bit weak on the "how." This is probably inevitable, since intelligence about insurgents depends on human sources, and the avalabiliity of these is very dependent on the nature of the society under attack by insurgents. One problem briefly mentioned in the chapter is the fact that Americans won't speak the language of the locals. The problems of linguistic support for the counterinsurgency operation are covered in an appendix. My own experience, though, is that it's difficult to work through an interpreter, and you never know if the interpreter really is working for the insurgents. Chapter Four covers designing a counterinsurgency campaign. Again, it's strong on the "what" but weak on the "how," because this is strongly dependent on the situation. Chapter Five covers executing counterinsurgency operations. Its main point is that "Counterinsurgency operations require synchronized application of military, paramilitary, political, economic, pshychological, and civic actions." Nothing new here. We knew that in Vietnam. The British knew it in Malaya. What's encouraging is that it's finally in a Field Manual. Chapter Six covers developing

More Then a Reprint!!!

Published by Thriftbooks.com User , 14 years ago
This is a reprint of the Army/Marine Counter-Insurgency (COIN) manual. But this book is more then a reprint and is worth the money just for the multiple forewords and the Introduction to this edition. All were written by subject matter experts in their field. One foreword in particular is written by John Nagal author of the COIN cult "Counterinsurgency Lessons from Malaya and Vietnam: Learning to Eat Soup with a Knife" re-released as "Learning to Eat Soup with a Knife: Counterinsurgency Lessons from Malaya and Vietnam," what makes this so interesting is that Nagal had a hand in developing and writing the manual with a group of renowned COIN experts. I am not sure if the others helped develop this manual for the military, but their forewords are just as interesting. For the content of the manual it will soon become the bible of COIN warfare/operations, it is by far the most detailed manual on the subject. It covers theories, tactics, techniques and procedures as used by various countries from various conflicts and lays these methods out within the current U.S. military context. This book is not meant to be specific to the Iraq or Afghanistan insurgency but is meant to be a "tool bag" of methods and ideas to be adapted to various conflicts. Finally the manual was reformatted in to an oversized handbook with a laminate type card cover with rounded corners that make it perfect to slip into a kit bag or rucksack. This is a must own for all soldiers (E1 and up!), politicians and concerned citizens.
Trustpilot
Copyright © 2022 Thriftbooks.com Terms of Use | Privacy Policy | Do Not Sell My Personal Information | Accessibility Statement
ThriftBooks® and the ThriftBooks® logo are registered trademarks of Thrift Books Global, LLC