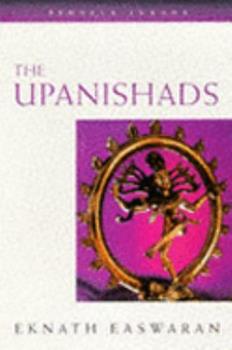 This description may be from another edition of this product. Easwaran's best-selling translation of the ancient wisdom texts called the Upanishads is reliable, readable, and profound. In the Upanishads, illumined sages share flashes of insight, the results of...

Good introduction to the Upanishads

Published by Thriftbooks.com User , 15 years ago
The Upanishads, regarded by Hindus as sacred scripture, are essential reading for anyone wishing to understand Eastern literature, philosophy and religion. The Upanishads are a series of works in dialogue format which explore the nature of the universe, the nature of the human soul and conciousness, God and Gods in Hindu belief, and also the appropriate religious duties of men. These works are often of varying length but with patience and read carefully, contain profound spiritual insights and also great philosophical interest. The Upanishads have influenced philosophers, poets, artists and writers including Emerson, Coleridge, Schopenhauer and Wittgenstein. They are also essential for understanding Buddhism, which in many ways is a reaction against Hindu philosophy and theology. This version of the Upanishads includes a good introduction by a scholar on Eastern literature as well as very useful explanatory notes, and an introduction to each chapter and book of the Upanishads. Also like other Oxford versions it is very affordable.

A Required Book For Any Collection of Eastern Wisdom

Published by Thriftbooks.com User , 15 years ago
This book, along with its companion translations of the Dhammapada and Bhagavad Gita, also by Eknath Easwaran, should be required for any serious student of Eastern Wisdom. If you can't afford Swami Nikhilanandas multi-volume set of complete translations of every Upanishad, and even if you can, you should also have this volume on your shelf.

Published by Thriftbooks.com User , 16 years ago
The Atman is the Soul. It is our real Self, God residing within us. We are to submerge the ego, and discover the Atman (Self). Uncovering the Self leads to nirvana, or enlightenment. This is the essence of this book. We will differentiate between what is Real (unchanging)and what is illusory (changeable). And as Jesus said, the Truth will set you free ...

Published by Thriftbooks.com User , 20 years ago
After reading the Dhammapada translation from the same author, it was not a surprise to find a similar high-quality translation of the Upanishads - the philosophical part in the Vedas of Hinduist religion. Some points to highlight in Easwaran's work: Poetic but precise wording, great introduction and commentaries, easy-to-read without creating a scholar-only work, impeccable introduction to the Historical context of the work and it's importance in Hinduism.Mr Easwaran's work convinced me to buy all Three books that form a Trilogy: The Dhammapada, The Upanishads and The Bhagavad Gita. Without a doubt, especially considering the price, this Trilogy is a steal.
Copyright © 2020 Thriftbooks.com Terms of Use | Privacy Policy | Do Not Sell My Personal Information | Accessibility Statement
ThriftBooks® and the ThriftBooks® logo are registered trademarks of Thrift Books Global, LLC