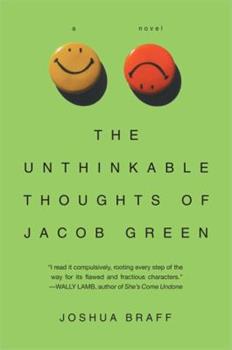 The Unthinkable Thoughts of Jacob Green: A Novel

It's 1977. Jacob Green, a Jewish kid from suburban New Jersey, sits on the stairs during his family's housewarming party, waiting for his father, Abram--charming host, everyone's best friend, and... This description may be from another edition of this product.

Thankful for the Unthinkable!

Published by Thriftbooks.com User , 15 years ago
Painfully Funny. Part of me felt like I had no right to feel so strongly about this book. I am a woman and I am not Jewish. I do have two boys and a Jewish husband. One part of me tells me that is why I was able to connect with this book to the extent I was, and part of me says that any person with a heart, humility and a sence of humor will love it. I cringed, laughed with tears in my eyes and got covered with goosebumps. It is absolutely genuine; no "set-ups" no smarmy cliches. This ficticious truth is stranger than fiction. Buy it, read it, and it will stick to you for a while.

Published by Thriftbooks.com User , 16 years ago
Cursed with a learning disability that stigmatizes him in the eyes of his monomaniacal father, adrift in adolescent doubts and hungers, bewildered by the chaos of his fragmented family, Jacob Green resorts to unthinkable thoughts to survive. His creator, the wonderfully talented and mordantly satirical Joshua Braff, understands all too well Mark Twain's maxim: "The secret source of humor itself is not joy but sorrow. There is no humor in heaven." Braff's breakthrough debut novel, "The Unthinkable Thoughts of Jacob Green," is both terrifically funny and heartbreakingly sad. Braff's gift is his ability to make you wince while laughing. It's not bad enough that Jacob Green has a father like Abraham, a man so narcissistic that his need for self-aggrandizement operates as a black hole in the family. Self-centered, smug and prone to violent verbal and physical outbursts, Abraham exists greedily as the center of his family's universe. Jacob wrestles with a gnawing sense of inadequacy, fostered in part by his father's insistence that Jacob attend a private Jewish school, where the child's uncommon knowledge of Hebrew is burnished but his treatable disabilities are ignored, left to foster an ever-growing sense of inferiority in the young adolescent. Jacob knows how pathetic he is. "I'm a bar mitzvahed junior high student with braces, a bedtime and a father so far up my [behind] you can see him performing in my pupils." Jacob longs to be like his rebellious older brother Asher, whose Hebrew name means "happiness." Asher has "a girlfriend with stone-washed jeans and tobacco breath" who performs sexual acts on demand. Asher drinks, smokes dope and draws licentious pictures of rabbis performing ungodly acts on pigs and lobsters. What Jacob knows of himself is not good. He has a learning disability at a time when most "uninformed teachers think he's stupid." His substandard spelling launches his father into paroxysms of rage. Failing in school, Jacob will "return to a home where his father has zero patience for a son with limitations." Instead of nurturing his son, Abraham torments him. "Tortured and embarrassed" by Jacob, Abraham "will literally hover over Jacob and wait for him to fail." It doesn't matter if his son can't write proper thank-you notes or find the ability to master multiplication tables. In a perversely gratifying manner, Abraham gets off on his son's failures; he relishes the chance to "demonstrate how grotesque failure really looks, feels, is." Yet, "Unthinkable Thoughts" is an uproariously joyous novel. Life seethes underneath and as a result of the Green family's turmoil. Jacob's introduction to sex, blithely facilitated by a live-in nanny, is every early-adolescent boy's wildest fantasy come alive. The quirks, paradoxes and contradictions of suburban Jewish culture thrive under Braff's exquisite descriptive passages. If Asher as an older brother appears nihilistic and destructive, he also offers an unspoken and

The Unthinkable Thoughts of Jacob Green

Published by Thriftbooks.com User , 16 years ago
This was a lovely little quirky gem of a book. The Unthinkable Thoughts of Jacob Green is sometimes sad, sometimes VERY funny, and a fascinating look at Jacob Green and his dysfunctional family consisting of his nutty father, his never-there-mother and his adored older brother Asher. And of course, his Jewish-ness, which is almost a character unto itself. Poor Jacob is torn in many ways; wanting to be the obedient and learned son his father wants him to be but also wanting the escape his mother and brother find. This coming-of-age novel speaks to all of us who have struggled to be something we're not, just to please someone else. I really enjoyed this novel, despite not being Jewish myself and not totally understanding some of the customs involved with this religion. However, as I have always been fascinated by the Jewish religion, it was interesting to learn new things about it.

Published by Thriftbooks.com User , 17 years ago
What other book has bar mitzvah thank-you notes as a major plot element? Well, they do in "The Unthinkable Thoughts of Jacob Green," a quirky coming-of-age story in 1970s New Jersey. Like his equally talented brother Zach (director/star/writer of "Garden State"), Joshua Braff shines in his heart-tugging, funny first novel. Jacob Green dreams of an ideal Jewish family, but unfortunately he's got a wildly dysfunctional one instead. His father Abram is an ideal host and father to the world -- but in his home he's an emotionally abusive perfectionist. Since Jacob has a learning disability, he gets the brunt of his father's wrath. Abram calls him an "idiot" and "retard," even though Jacob is clearly a bright young boy. His father's irrational rages cause Jacob to withdraw into his own imagination, especially since his worn-out mother Claire has fallen in love with her professor. His "unthinkable thoughts" center on his school, his religion, and his lust for the nanny. And it's only through his fantasies on "the unthinkable" that he can deal with his disintegrating family life. Family relationships are complex enough when the family is what passes for normal. If they're strange -- forget it. Remember what Tolstoy said: "Happy families are all alike; every unhappy family is unhappy in its own way." It's a credit to Braff that he can make what seems like a very depressing novel so incredibly funny. And were it not for the endearing Jacob and his quirky fantasies, it probably would be very depressing. Braff has an irreverent, quick kind of prose, with a mixture of darker problems and full-blown comedy (such as Jacob's brother drawing a picture of a rabbi in a threesome with a pig and lobster). The balance between darkness and humor is just perfect. And he makes no apologies for his politically incorrect jokes -- which makes them even more hilarious. Jacob himself is a lovable character, eager to please and with a sort of naughty innocence. His fantasies are reflections what he wants to do, and that makes them even more poignant. Abram is both amusing and disturbing, given his tendency to blow up about trivialities. Supporting characters like brother Asher and Claire are pretty interesting as well, but the book belongs to Jacob. "The Unthinkable Thoughts of Jacob Green" is hysterical and heartbreaking, a look at a crumbling family and the unique young boy in the middle of it. A must-read, and one of the best books of 2004.

Published by Thriftbooks.com User , 17 years ago
I was inspired to pick this book up after learning of it's existance from a short article in "people" magazine about brothers Zach and Joshua Braff and their Movie and Novel debuts. I had already seen and fallen in love with Garden State so I figured a book, by another member of the Braff family would be a safe bet for a good read. I was lucky enough to find that B. Dalton at my local mall had recieved a few copies earlier than scheduled and so I picked it up two days ago and I just finished reading it this morning and I have come to the conclusion that the Braff family is one of admirable story telling ability. The book is hilarious where intended and yet still able to maintain a tone of seriousness when neccessary. Braff's descriptions of friends and family members are perfect, causing me to ponder on the similarities between the charecters in the book and people I know in my life. All in all, I'd say it's a definite must read for anyone. Go buy this book NOW!
Copyright © 2022 Thriftbooks.com Terms of Use | Privacy Policy | Do Not Sell My Personal Information | Accessibility Statement
ThriftBooks® and the ThriftBooks® logo are registered trademarks of Thrift Books Global, LLC