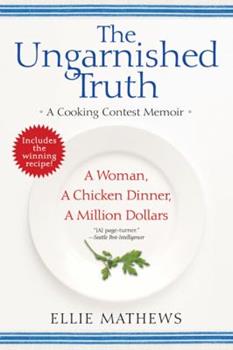 A woman, a chicken dinner, a million dollars - and a romp through the heartland of America's competitive cooking culture. When Ellie Mathews entered her Salsa Couscous Chicken in the venerable Pillsbury Bake-Off, she never imagined she'd win the grand prize. Immediately after Alex Trebek announced that her dish had won a million dollars, she was thrown into the limelight. Booked with Oprah and Rosie - even photographed for the New York Times in a...

How an everyday cook found her way to culinary fame

Published by Thriftbooks.com User , 12 years ago
THE UNGARNISHED TRUTH: A COOKING CONTEST MEMOIR tells of the author's win of the famous Pillsbury Bake-Off and how it changed her life. The history of the Pillsbury Bake-Off and insights into its competition contestants tells of how an everyday cook found her way to culinary fame, offering humor, social commentary and mouth-watering descriptions of the process. Any general library will relish this.

Published by Thriftbooks.com User , 13 years ago
What does it take to win a million-dollar recipe contest? According to winner Ellie Mathews, it's all about luck. In her memoir The Ungarnished Truth, Mathews weaves the tale of her brush with fame in the Pillsbury Bake-Off. As an unassuming Seattle gal, Mathews dabbles in her kitchen with one goal in mind: to feed her family healthy meals. It just so happens they taste good, too. Mathews' memoir reveals the inner thoughts of an ordinary woman thrust into nationwide fame. One day she's thrift store shopping, and the next, she's handed a prize envelope by Alex Trebek. One minute, she's greeting her newborn grandbaby into the world, and the next, she's live on Oprah. This story offers provocative insight into the world of competitive cooking--a world the author entered with a bang! She provides repetitive assurances that she leads a "normal" life--both before and after her big win, yet her knowledge of food and her ability to wow the masses will demonstrate that the woman has just as much talent as she does good luck. If you like to cook and have a competitive itch, this delightful tale, like the winning recipe that stirred it, is sure to please. Reviewed by Amber K. Stott

Published by Thriftbooks.com User , 13 years ago
The Pillsbury Bake-Off is a part of Americana and in this book, we get the true story of how one woman was selected to compete and actually won the whole shebang. Ellie Matthews can actually write, so this isn't just some contrived tale. It's her story and although I don't think Ellie herself quite gets it, she's really a fascinating example of modern women. I loved feeling as if I went through the Bake-Off right next to her. I loved her honest take on events and I loved reading the life story of someone who's journey has been so different from my own. I feel as if she's a friend after reading this book and I appreciate someone who can tell a good true story without relying on dirt and gossip to do so. I admire Ellie and I enjoyed this book. And I might even try making her recipe for Salsa Chicken Couscous - after all, anything that wins you a million bucks must be pretty darn good.

Published by Thriftbooks.com User , 14 years ago
Ellie Mathews writes an engrossing memoir which centers around her capturing the one million dollar prize at the Pillsbury Bake-Off. Through out the 277 page book Ellie shares her experiences revealing her strength of character and modesty. I am not fond of cooking, but Ellie makes it sound like developing her recipe for this and other contests was easy. By the end of the book, I actually felt like I had a shot at winning cooking contests and was ready to start cooking up a storm. Then it was like reality set in when confronted by spices and cooking pots. Ummm,well maybe no contests for me. But, it was very interesting to read how her recipe ideas evolve. I love that she focuses on real food, simple preparation, easy to do. And she has a conscious - not to much butter, light on the sugar etc. Ellie writes very clearly about her feelings. What was going through her mind when they revealed that she was the winner. It is interesting to read her reactions because they are so different than mine would be. I would be screaming and jumping up and down if I won, but she barely manages a glimpse of a smile and a brief hug with the host. I think she was so overwhelmed, she didn't know what to do. She shares how she doesn't feel like she was adequate on some of the shows she was on to promote her recipe. She was so eager to please the Pillsbury people, to not let them be disappointed. She fully develops her character and though at the beginning of the book I felt like saying what is wrong with you. Why aren't you excited? Soon I realized this was Ellie, she was very excited but this is her way of reacting. I grew to really embrace her character. Her sense of right from wrong. Of living frugally. Of helping others. This is Ellie and there is so much to love about her. In addition to sharing a lot about the mechanics and cooking contests and her observations, the book also includes some of her winning ideas for competing.Little nuggets that can be applied to many types of competitions. The back of the book includes her Pillsbury Bake-Off prize winning, "Salsa Couscous Chicken". Great read! ~ Lee Mellott

Published by Thriftbooks.com User , 14 years ago
I could not put this book down--I read the entire thing in half a day. I love memoirs of unfamous people, ordinary folks who've got extraordinary stories to tell. I have never read anything about cook-offs, and this was an interesting glimpse inside the minds--and kitchens--of seemingly unlikely contestants. I confess, it made me want to get in the kitchen and cook up something new, thinking, "If she could do it, so can I!" (As I sit and munch on take-out pizza, I realize that's not going to happen anytime soon, but the book left the illusion that it could be possible...) Admittedly, I wanted to shake Ms Mathews at times for not showing the cliche' emotions we expect from "winners," but I was also sympathetic to her plight, and happy that she was able to explain herself in this book beyond what people saw on television or read in reviews. She's anything but unemotional, as evidenced by the loving way she constantly refers to her husband, and I had tears as she described meeting her granddaughter for the first time, and being reunited with a long-lost friend. I commend her for staying true to herself, and I look forward to trying the recipe on my family, though I'm not even sure I know what a currant looks like! Well done!
Trustpilot
Copyright © 2022 Thriftbooks.com Terms of Use | Privacy Policy | Do Not Sell My Personal Information | Accessibility Statement
ThriftBooks® and the ThriftBooks® logo are registered trademarks of Thrift Books Global, LLC