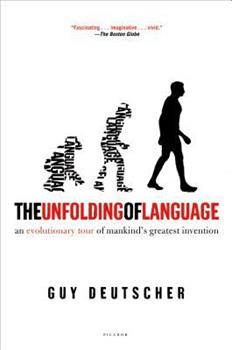 The Unfolding of Language: An Evolutionary Tour of Mankind's Greatest Invention

Blending the spirit of Eats, Shoots & Leaves with the science of The Language Instinct , an original inquiry into the development of that most essential-and mysterious-of human creations: Language Language is mankind's greatest invention-except, of course, that it was never invented." So begins linguist Guy Deutscher's enthralling investigation into the genesis and evolution of language. If we started off with rudimentary utterances on the level of...

Published by Thriftbooks.com User , 13 years ago
The author calls language an "uninvented invention". This highly engaging, witty book is an attempt to uncover at least some of the secrets of language and to dismantle the stated paradox. He explains the meaning of `structure', argues that the present is the key to the past & explains why languages do not remain static. By drawing on recent discoveries in linguistics, he explores the forces of destruction, creation and the innate structure of language. It is revealed that the source of grammatical elements like case markers, pre- & post-positions and tense markers is the mundane words like inter alia `hand' and `go'. Chapter One: Castles In The Air, takes a close look at the structure of language, whilst the following chapter: Perpetual Motion, demonstrates linguistic development and change with particular reference to English, German, French and the Indo-European language family as a whole. Chapter Three: Forces Of Destruction, is a further investigation of how and why changes in sound and meaning take place, with many examples from Indo-European. Chapter Four examines interesting verbs like "to have/to hold" and the concepts of space & time in linguistic expression. All languages use spatial terms to describe temporal relations, revealing that space-time is deeply entrenched in human cognition. A metaphor is a way of describing something by comparing it to something else, and is an indispensable element in thought-processing. The stream of metaphors flowing through language moves from the concrete to the abstract. Language consists of layer upon layer of metaphors that are as common in plain conversation as in sublime poetics. Chapter Five: Forces Of Creation, is a discussion of how new words and structures arise, how meanings change and the multiple ways in which languages are enriched by these developments. It was interesting to learn, for example that the conjunction `but' derives from Old English `be-utan' ("by the outside"). Chapter Six looks at the need for order in languages and contains lots of interesting information on the intricate Semitic verbal system. In essence, the effects of erosion interact with the mind's craving for order. There is thus a constant search for regular patterns and spontaneous analogical innovations arise. This is based on erosion + expressiveness and erosion + analogy. The final chapter brings it all together and includes detailed discussions of the common sources out of which possessives, quantifiers, plural markers & articles may develop, the various interactions of verbs & nouns, and the nuances of action like tenses (past, present, future, continues & completed), and modality (should, ought, etc.). Adverbs and subordinate clauses are also discussed. In the Epilogue, Deutscher revisits the mind's desire for order and the fact that innovation is based on a principle of recycling. He also discusses the movement towards simplification in the word structure of the Indo-European languages

An insightful analysis of linguistic evolution, but it's not light reading

Published by Thriftbooks.com User , 16 years ago
This is one of the most intellectually fascinating books I have ever read. As soon as I started thinking about the design of language, I have wondered how language comes about. Who decided which verbs would be regular and which irregular? Why "mice" instead of "mouses"? Even as a child, I wondered "Who decides these things?" (Admittedly, I was not a typical kid.) Why does our language change? Why is English spelling so goofy? How did the Latin noun case structure evolve? Who invented the Arabic triconsonantal pattern? By now, many readers have said "Huh?" and moved on to the next book. But if these are things you've wondered about, this is the perfect book for you, too. Deutscher tries to explain the mysterious processes underlying the development and decay of languages. In his style of writing, he is walking a tightrope; this is a book that is aimed at intellectuals who are not knowledgeable about lingustics. At times he's a bit too cute for his own good, but I will forgive that flaw because it's preferable to being too obtuse. Deutscher's book will never make any bestseller list, but it has made the academic discipline of linguistics accessible to those outside his specialty.

Published by Thriftbooks.com User , 16 years ago
An excellent addition to my collection of popular nonfiction books on language. Deutscher explains how language changes over time. The discussion of metaphors is fascinating. His final theory on why languages have tended toward simplicity in case systems is quite convincing. This is a five-star book moving towards four stars. While it is brilliantly conceived and has some stunning insights, the book is too laden with examples and feels padded at times--you can almost hear the editor saying, "Bring in more examples, expand the book a bit". But this is a relatively minor criticism. This is an excellent book.

Published by Thriftbooks.com User , 16 years ago
This book is a very interesting attempt to present an explanation for the origin of some of the features of today's language structures. The author does not try to go back to the very beginning of language itself, but takes his story from the point where words already existed, but most grammatical structure had not yet evolved, still before any language of which a record survives. The author uses examples in present-day languages to illustrate processes in linguistic evolution that are currently taking place or have taken place recently enough to be well documented. This lends a lot of credibility to his ideas. Because the author was born in Israel (presumably having modern Israeli Hebrew as his first language) and has become a specialist in Semitic historical linguistics, he presents more examples from Semitic languages than one often sees in popular linguistics books intended for the English-language reader, but it is all written in a very easily understood way, and I find the book as readable as if it had been written by a native speaker of English, though with a few signs that the English which the author learned was more British than American. There is only one negative comment I would make, and that does not sufficiently detract from the value of the book that I would deny it a 5-star rating: I wish that the author would more clearly separate his own personal speculations from the ideas which are believed by the majority of linguistics professionals. It is clear that a lot of the ideas presented in this book are the author's own, but it is not clear how many.
Copyright © 2022 Thriftbooks.com Terms of Use | Privacy Policy | Do Not Sell My Personal Information | Accessibility Statement
ThriftBooks® and the ThriftBooks® logo are registered trademarks of Thrift Books Global, LLC