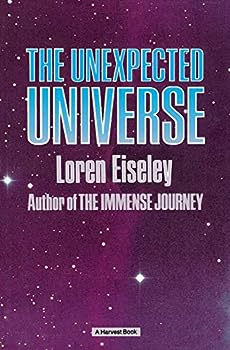 This description may be from another edition of this product. Drawing from his long experience as a naturalist, the author responds to the unexpected and symbolic aspects of a wide spectrum of phenomena throughout the universe. Scrupulous scholarship and magical...

Published by Thriftbooks.com User , 11 years ago
Loren Eisley's amazing takes on things others take for granted will make you consider the universe in a new way.

Published by Thriftbooks.com User , 15 years ago
There are a number of writers of works for the general public on scientific subjects ( Oliver Sachs, Lewis Thomas, Alan Lightman come first to mind) who in exploring their subjects provide profound and poetic insight into human nature and the human situation. Eiseley is such a writer also , and at times he writes passages of exquisite beauty. He often takes off from his own personal observation and in the course of reflection teaches truths about the natural world and the overall development of mankind. He is no naive optimist and his brilliant essay in this volume comparing two of his great naturalist heroes, Darwin and Thoreau he speaks about the cruel and wasteful sides of the natural world. Even more he emphasizes the surprises the close observer of the natural world is often confronted by, the 'Unexpected Universe' of his title. Eiseley sees the mystery that is constantly the byproduct of close observation of nature. "The evolution of a lifeless planet eventually culminates in green leaves. The altered and oxygenated air hanging above the continents presently invites the rise of animal apparitions compounded of formerly inert clay. Only after long observation does the sophisticated eye succeed in labeling these events as natural rather than miraculous. There frequently lingers about them a penumbral air of mystery not easily dispersed.We seem to know much, yet we frequently find ourselves baffled.Humanity itself constitutes such a mystery, for our species arose and spread in a time of great extinctions. We are the final product of the Pleistocene period's millenial winters, whose origin is still debated.Our knowledge of this ice age is only a little over a century old, and the time of its complete acceptance even less. Illiterate man has lost the memory of that huge snowfall from whose depths he has emerged blinking." In this context many of the best passages of this book relate to Eiseley's musings on prehistoric life and development of mankind. Some might find in this emphasis a hindrance to religious faith, but in one exceptionally telling passage of the book he shows the kind of friendly connection between scientific observation and religious faith which many of us would like to affirm. "It is not sufficient any longer to listen at the end of a wire to the rustlings of the galaxies;it is not enough even to examine the great coil of DNA in which is coded the very alphabet of life. These are our extended perceptions.But beyond lies the great darkness of the ultimate Dreamer, who dreamed the light and the galaxies. Before act was, or substance existed, imagination grew in the dark. Man partakes of that ultimate wonder and creativeness. As we turn from the galaxies to the swarming cells of our own being, which toil for something , some entity beyond their grasp, let us remember man, the self- fabricator who came across an ice age to look into the mirrors and the magic of science. Surely he did not come to see himself or his wild visa

Published by Thriftbooks.com User , 19 years ago
The title of this review is from Leo Bustad, DVM, PhD. Please read the essay "The Star Thrower" for a wonderfully poetic discussion of what sets us apart from "animals" and what connects us. For anyone who has ever thought about how we should act in relation to other species, this essay will provide an intriguing viewpoint. For anyone who is a caregiver to animals, this essay is required reading. Throw away the rest of the book if you want, but you MUST read this essay!

Somber essays from an outstanding writer

Published by Thriftbooks.com User , 21 years ago
Loren Eiseley's dark, brooding prose is unique in the annals of nature writing. "The Unexpected Universe" features some of what are considered Eiseley's best essays. Heavily autobiographical and deeply personal, these essays are not cheerful ramblings on the joy of communing with nature. They are bleak, lonely musings on the human condition. Sometimes, Eisely's scholarly style gets the best of him - his penchant for expounding upon the works of obscure authors taints some of his work with a pompous air. But his best moments more than make up for his bad ones. Eiseley's universe can be profound, ethereal, and dreamlike. Life, Eisely shows, is a journey of discovery filled with moments of awe, fear and sorrow, and occasionally, even with moments of joy. His writings rekindle our sense of wonder for a universe whose intricacies and secrets extend far beyond the boundaries of human understanding.

You cannot miss with Loren Eiseley

Published by Thriftbooks.com User , 22 years ago
I think every book this man ever wrote is a masterpiece. His style is thoughtful, haunting, and beautiful. They are all good. Theodosius Dobzhansky described him as "...a Proust miraculously turned into an evolutionary anthropologist..." and Ray Bradbury wrote glowing reviews of many of his books including this one.Here he writes from a naturalist's perspective on the unexpected and symbloic aspects of the universe. Read about seeds, heiroglyphs on shells, the Ice Age, lost tombs, city dumps and primative Man. The underlying theme is the desolation and renewal of our planet's history and experience.
Copyright © 2020 Thriftbooks.com Terms of Use | Privacy Policy | Do Not Sell My Personal Information | Accessibility Statement
ThriftBooks® and the ThriftBooks® logo are registered trademarks of Thrift Books Global, LLC