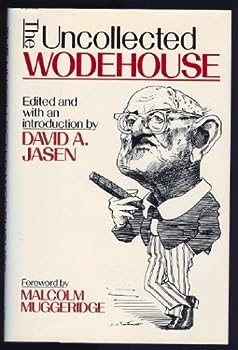 This description may be from another edition of this product. Taken mostly from old newspapers and magazines, this work contains articles and short stories which were written early in Wodehouse's literary career. It includes the only mystery story Wodehouse ever...

Before Jeeves and Wooster

Published by Thriftbooks.com User , 15 years ago
After watching the excellent Steven Fry and Hugh Laurie Jeeves and Wooster programs, I read a few of the Jeeves and Wooster books and found them as hilarious as the TV shows. Little did I know that Wodehouse had a seventy-five year writing career which included plays, lyrics, poems, magazine articles, novels, and short stories. The Uncollected Wodehouse assembles some of Wodehouse's early works and short stories that haven't appeared in other collections and had therefore been unavailable until the publication of this book, shortly after Wodehouse died in 1975. The stories aren't bad, but there are only glimpses of Wodehouse's future genius and humor. To be fair, many of these pieces were only intended for magazines and were "disposable," in a sense. The short article on advertising, for instance, was probably funny at the time (circa 1909) but doesn't compare to Dorothy Sayers's scathingly funny indictment of the advertising profession in her Murder Must Advertise. A few of the short stories in The Uncollected Wodehouse, on the other hand, are still quite funny. You can visualize the chaos of nineteen baskets each containing a pug dog arriving at the door of the very proper Colonel Reynolds in When Papa Swore in Hindustani. And Reggie Pepper in The Test Case is funny enough as a precursor to Bertie Wooster that it would be worthwhile tracking down the other six stories he appeared in.

Published by Thriftbooks.com User , 16 years ago
P.G. Wodehouse is known to generations of fans as the creator of Jeeves and Wooster, but his writing was quite more eclectic and widespread than that venerable collection of tales. This text, compiled by David Jasen (Wodehouse's principal biographer) shows a new breadth to Wodehouse - this includes newspaper and magazine articles, short stories beyond his usual genre (including the only mystery short story Wodehouse ever wrote), and even a little bit of poetry. Wodehouse himself had an eventful life, including time spent in a prison camp as well as incarceration in a maternity home in France, but, according to Malcolm Muggeridge in the Foreword, there is no diminishment in the quality of Wodehouse's writing regardless of his personal circumstances. This is apparent reading across this broad collection that spans the greater part of seven decades, that Wodehouse had a particular gift and style that remained permanent. Wodehouse, according to Muggeride and Jasen, was a clown of the highest order - clowns are often keen observers of human nature and activity, knowning what makes people tick, so as to make them laugh. 'Laughter, indeed, is a great equaliser between the impulse to adulate and a propensity to scoren those, as the Book of Common Prayer has it, set in authority over us - which is why, incidentally, laughter is so abhorrent to all authoritarians whatever their ideology.' Humourous romances are rarely the stuff of revolution, but they often do little to support the existing order of things. Wodehouse's stories have depth to them, but there's always an undercurrent that simultaneously admires and disparages the system - whatever that system may be. In this collection are characters little known even to Wodehouse fans. For example, the character of Reggie Pepper, was the first series character for Wodehouse; however, with the advent of Bertie Wooster, Pepper receded from view. This is a book full of 'what ifs' that the keen observer can derive much pleasure, and much frustration, from considering. This, in the end, is only true to form of the Wodehouse style.

It's Wodehouse. How bad could it be?

Published by Thriftbooks.com User , 20 years ago
These collected writings, of various sorts, while not the cream of the Wodehouse crop, are still Wodehouse. As such, they are still superior to roughly 95% of everything else written in a humorous vein. What's more, taken as a whole, they show the evolution of Wodehouse's writing from schoolboy days into his prime. And, some of them are, in fact, gems.Not, perhaps, the book with which to makes one's acquaintance with Wodehouse, but a worthy addition to the published Wodehouse collection.

No Bottom to This Barrel

Published by Thriftbooks.com User , 21 years ago
When the wary reader encounters "The Uncollected So-and-So", he is wise to keep a tight grip on his billfold. He may suspect that what has gone uncollected may have been left lying about for good reason and perhaps should have been placed in the hands of a "collector" of a kind other than literary.Happily, P. G. Wodehouse inspires no such fears. One might say that, while some Wodehouse is better than others, none is worse. Though falling largely into the second class, the pieces in this modest volume lack nothing of the familiar Plumsian delight.The historically minded will find the very first writing for which Plum received pay ("Some Aspects of Game-Captaincy", in which the terms "blot" and "excrescence" are coupled in the way that would someday rolling trippingly off the tongues of Bertie Wooster's aunts), his first appearance in Punch ("An Unfinished Collection", the prelude to many a future collecting mania), his first published short story ("When Papa Swore in Hindustani", where, not for the last time, a recalcitrant father learns the hidden virtues of his daughter's beau) and his first butler story ("The Good Angel", whose Keggs misplaces his h's and lacks Jeeves' nobility of spirit but nonetheless applies a keen understanding of the psychology of the individual to reunite young hearts separated by an interloping poet).There are, in all, fourteen stories, none likely to be familiar to even the most assiduous Wodehousian, and fifteen occasional items from newspapers, including a couple of poems. The non-stories ("nonfiction" would be distinctly not le mot juste) are very slight (averaging only two pages each), and some depend on topical references for their humor. They are best enjoyed as bon-bons between the more substantial fare.Wodehouse unfortunately stopped writing a few years ago. Editors must now fish into the barrel for new entertainments. It is our good fortune that this particular barrel has no bottom.
Copyright © 2020 Thriftbooks.com Terms of Use | Privacy Policy | Do Not Sell My Personal Information | Accessibility Statement
ThriftBooks® and the ThriftBooks® logo are registered trademarks of Thrift Books Global, LLC