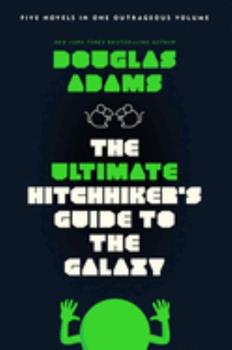 The Ultimate Hitchhiker's Guide to the Galaxy: Five Novels in One Outrageous Volume

(Part of the The Hitchhiker's Guide to the Galaxy Series)

In one complete volume, here are the five classic novels from Douglas Adams's beloved Hitchhiker series. The Hitchhiker's Guide to the Galaxy ( Nominated as one of America's best-loved novels by PBS's The Great American Read ) Seconds before the Earth is demolished for a galactic freeway, Arthur Dent is saved by Ford Prefect, a researcher for the revised Guide . Together they stick out their thumbs to the stars and begin a wild journey through time...

Appears to be in good shape.

Published by Photo Book Enthusiast , 1 month ago
Great series of books. Glad to add to my collection.

Published by Anna , 1 year ago
I don’t really care about the condition of a book, but I like to have all the pages?! I mean that’s just plane robbery, I’d like to have my money back.

Published by LeighaB , 1 year ago
I absolutely love HHGTG and was stoked to get the Ultimate Guide... however, the previous owner removed the first 26 chapters. Very disappointing.

why you should buy this book

Published by Jamie , 1 year ago
it has 2 books not related to either movie that was made. in one Dent falls in love with the woman who figured out the meaning of life, and the next book explains WHY earth MUST be destroyed

Published by Roxanne , 3 years ago
I bought this along with 2 other books and I just can't wait to read all the books with the bonus story!!!

Published by Thriftbooks.com User , 16 years ago
I have been a fan of Douglas Adams since I first read "The Hitchhiker's Guide to the Galaxy" when it was released. I have previously read all of these books (though I had not read the short "Young Zaphod Plays it Safe") before, some several times. When I saw this compendium I was compelled to buy it so I could have a volume with all this brilliant insanity in one place. I found Adams' introduction and explanation of the different Hitchhiker's permutations and iterations fascinating and revealing, and found all the books as whimsical and delightful as I had recalled. This edition has the added benefit of being printed on high quality ultra-thin paper, and being quite plushly bound. It definitely looks like an heirloom, but inside it is one hundred percent inspired lunacy. Without question the original book is the crown jewel of the collection, and stands the test of time as one of the most original and brilliant novels written in the twentieth century. More than the plot following our heroes Arthur Dent and Ford Prefect (and a cast of thousands), it is Adams' amazing ability to turn a phrase into something not totally unlike any other book isn't that utterly distinguishes the first volume of the series. While that last sentence is an obvious homage to Adams, his wit and ability to redirect a line to a place that is totally unpredictable is uncanny. The book is not only brilliantly conceived, but glitters with a patina of dark humor which is utterly unique in literature, the only analog being the television and film productions of Monty Python. I enjoyed the other volumes in the series as well, with the first three being my favorites. By "So Long, and Thanks For All the Fish" I started to see a bit of monotony creep into Adams' writing style, occasionally to the point that it almost seemed that he was forcibly imitating himself. Although I did enjoy the final two volumes in the series, I would probably have given them independent ratings of four stars, while the others are clearly five star masterworks. I did find the character of Fenchurch (introduced in "So Long, and Thanks For All the Fish") intriguing, and couldn't agree more with Adams' analogy of Mark Knopfler's guitar style to the effect of Fuolornis Fire Dragons. It is no surprise to me that Douglas Adams was a Dire Straits fan, and I found his brief tribute to the band to be an amusing buried delight. This book is not only great contemporary literature, a level of accomplishment which most sci-fi novels aspire to, but rarely achieve, but is a great value too. The book is over 800 delightful pages long: buy this book and prepare for a wonderful otherworldly journey, but don't forget to bring your towel.

You Almost Can't Ask For Anything More

Published by Thriftbooks.com User , 17 years ago
While reading this book, you will frequently find yourself debating a few things in your mind. One of those things is: "I really need sleep, but I need to read this book more, I just don't know what to do..." This book is really a collection of all five books in the Hitchhiker's trilogy (um, ya, five books shouldn't be in a trilogy but thats how this series works), written by Douglas Adams. However, I had no previous experience with these books or with Douglas Adams and I thoroughly enjoyed reading them in this form. I couldn't image having read one of the books, then having to wait to get the other one. This series really is meant to be read in its entirety. The entire story flows throughout each book and needs to be read in order too. So here is the story, a terrible accident is about to befall earth which drags the main character, Arthur Dent, on a wild romp throughout a hilarious Galaxy. Arthur just wants to get back home to Earth which leads to the stunning climax. This series is full of one liners, two liners, and even some three liners. If your a fan of British comedy, British satire, sci-fi, or just great literature then Douglas Adams weaves a tale that will appeal to you. The first book in the series, The Hitchhiker's Guide to the Galaxy really should be required reading in school, it really is that good. Most "funny books" wouldn't even attempt to dissect the absurdity of our so-called civilization, this is what sets the Hitchhiker series apart from anything else. At points you see that while it may be funny -- all it really is, is insightful. The ridiculousness of humanity is displayed brilliantly -- through aliens. You'll find yourself laughing out loud. As far as the ending to everything, it is one of the best endings of any series ever (in my opinion of course). It really instills an important moral, whether you get it at first or not, you may have to think about it a while. The ending also wraps up everything and makes perfect logical sense. The spontaneous happenings will have you on the edge of your seat until the very end too. This series deals with what it really means to be alive and what the meaning of life really is. Isn't that really what everyone wants to know anyways? The answer might be so funny you'll die laughing! The Hitchhiker's Guide to the Galaxy is being made into a movie too, due out in 2005. I don't see how it could live up to the high standard set by this book but we will have to see. If you enjoy this I'd highly recommend THE LOSERS CLUB: Complete Restored Edition by Richard Perez, a somewhat unrelated (not sci-fi) but very amusing and FUN book. Short, quick, and funny -- that's how I like them. Overall, The Ultimate Hitchhiker's Guide to the Galaxy really is great! A must read by everyone!

Published by Thriftbooks.com User , 19 years ago
I was hooked on the Hitchhiker's Guide to the Galaxy from the first page of the first book. This collection of all books is a fantastic set. For me these stories really joke with our very existence on Earth and remind me how very much there is to this universe that we don't know. They are pleasant, fast reads and very humorous. Nothing can touch the first book on humor, but others do a good job. I didn't really like So Long and Thanks for All the Fish too much, and the Zaphod short story is a waste. The other books are delightful and a good read. I highly recommend this book as a gift to dorky guys who are interested in technology and space. My girlfriend got it for me and it was right on the mark! Farewell, Douglas Adams, and we thank you!

Published by Thriftbooks.com User , 19 years ago
I read this book expecting a lot - I had heard numerous references that were supposedly to this book, so I decided to finally read it and find out what all the hype was about.I'm glad to say I wasn't disappointed. Quite to the contrary, the book exceeded my expectations. It's beautifully crafted, and the humor is so whimsical and Pythonesque, that it's both clever and absurd at the same time.It was especially great to read one seemingly absurd part of a story (like a detailed description of a flowerpot hitting the ground), and then, several books later, find out how it ties with the story. Adams does an excellent job and bringing things together - reading these series is like watching a puzzle unfold in front of your eyes.Another great aspect was finally reading about the many references found to the story - you'll never look at number 42 the same way.While many people have given negative reviews to the last book (Mostly Harmless), I thought that while it was a bit hard to follow, it wasn't any different from any other H2G2 book. If you're a Python fan, you owe it to yourself to read this book (Adams wrote several skits with the Pythons and was a close friend). If you're not, you might still like it, if you like whimsical, clever humor.

Published by Thriftbooks.com User , 23 years ago
This is undoubtedly the best sci-fi-comedy ever written, and I say that with confidence. Douglas Adams' wit is unmatched in this genre. I have re-read this series at least 5 times, and it gets better each time. Thanks to Adams's insight, I too am on a continual search for the reason why 42 is the answer (just look how many times it pops up randomly... or not so randomly)In this classic story, Arthur Dent, a lovable and easily-confused Earthling gets dragged on the journey of a lifetime as Earth is destroyed by a group of Vogons to make way for a hyperspace by-pass. He is joined by a host of unforgettable characters: the easy-going researcher for the Hitchhikker's Guide to the Galaxy Ford Prefect; the hyper Two-Headed, Three-Armed President of the Galaxy Zaphod Beeblebrox; and his sexy companion former-Earth-reporter Trillian; and Marvin, the hopelessly depressed android. Together, they are off to explore the galaxy, battle with pesky mice-geniuses (no, not Pinky and the Brain), eat dinner at the end of the universe, travel through time, meet the man who designed Norway, redefine "improbability," patronize and annoy countless alien races, search for a decent cup of tea in an unforgivig universe, and continue the eternal quest to find out why 42 is so darn important.Adams is a visionary. This is unlike any series I have ever read. Although "Mostly Harmless" was a slightly disappointing conclusion(?) to such an entertaining series, I will always consider the Hitchhikkers' "Trilogy" to be among the greats. If you do not own or have never read these books, then this compilation is a necessity for you. I recommend that you purchase it immediately, call in sick from work, school, or whatever, put up a small Somebody Else's Problem (SEP) field around you, and read it and again and again.
Trustpilot
Copyright © 2022 Thriftbooks.com Terms of Use | Privacy Policy | Do Not Sell or Share My Personal Information | Accessibility Statement
ThriftBooks® and the ThriftBooks® logo are registered trademarks of Thrift Books Global, LLC