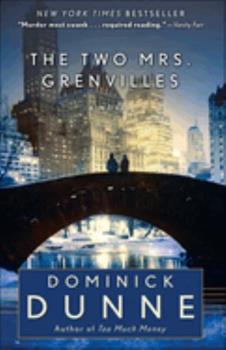 NEW YORK TIMES BESTSELLER - "Murder most swank . . . required reading."--Vanity Fair When Navy ensign Billy Grenville, heir to a vast New York fortune, sees showgirl Ann Arden on the dance floor, it is love at first sight. And much to the horror of Alice Grenville--the indomitable family matriarch--he marries her. Ann wants desperately to be accepted by high society and become the well-bred woman of her fantasies. But a gunshot one rainy night propels...

Published by Thriftbooks.com User , 14 years ago
"The Mrs. Grenvilles" is a mixture of the true-life events of the wealthy Woodward family, the acid of Truman Capote's "Answered Prayers" (which also had a section based on the Woodwards), and a few original ideas of the author's, Dominick Dunne. Dunne is not shy about "borrowing" names and events from Capote; in fact most alterations are so slight it seems hardly worth the bother. The names and events are also closely tied to their real-life counterparts; so close that the fictional elements, which often paint a very unflattering portrait of the central characters, do a horrible disservice to those involved. Many readers will assume that what Dunne has written is the gospel truth. In a nutshell, the story is about Ann Arden, born Ursula Mertens. Ann will do almost anything to rise above her Kansas farm upbringing. Finding modest success as a showgirl and actress, she scores the big time by landing William Grenville Jr., heir to one of the wealthiest families in New York. Although "Junior" falls for her, his snobbish family does not. After the central climax of the novel (no plot spoiler here!), The Woodwards protect Ann at all costs, rather than risk the dirty laundry of their son's life being aired. It is a truly fascinating commentary on the morals and lifestyles of the rich and famous, with an ending that is also very heartbreaking as Ann realizes all her work to climb up the social ladder has left her very lonely. The novel is written through the eyes of Basil Plant, a gay writer & extra for society dinners who wants to exact revenge on Ann for making fun of his sexual persuasion; it is his revenge that becomes the final straw for the exhausted Ann Arden at the end of the novel. Plant is obviously Truman Capote, whose unfinished novel "Answered Prayers" caused him expulsion from society (for telling all their behind-closed-doors tales) and was the final embarrassment for the real-life Ann Woodward. Well written with fascinating characters and events, this book is a fun and breezy read; those who have seen the TV-Movie with Ann-Margret will note that the characters in Dunne's book are less sympathetic, and the rollercoaster temperament of Ann Arden has also been somewhat neutered. I enjoyed both book and movie, but they should not be compared to each other.

Published by Thriftbooks.com User , 15 years ago
When a scion of an East coast banking family is shot by his starlett wife, the family purses its lips. Dominick Dunne masterly describes how two worlds passionately met and clashed. Truman Capote's unfinished novel 'Answered Prayers' was inspired by the same real life events. Compassionate, intriguing, and, yes, scandalous.

Published by Thriftbooks.com User , 16 years ago
I am always reading a book on the subway. Most recently, that book was "The Two Mrs. Grenvilles." Bad choice. Twice I got so caught up in the detail of the lives of the Grenvilles that I read on past my stop. That has never happened before, and hopefully never again. Reading about the high society lives, the passion, the intrigue, the snobbishness of the society-registered upper crust is indeed a guilty pleasure, and a great pleasure as well. This novel, supposedly based on the true-life murder of William Woodward by his wife, presents the older Mrs. Grenville (mother-in-law): born well, married well, lived well. And it presents the younger Mrs. Grenville (daughter-in-law): born dirt poor in Pittsburgh, Kansas (yes Kansas), deserted by her father as a young girl, brought up by her mother and her various men of the moment, then turning to the glamorous life of a showgirl as she danced in a line behind Ethel Merman. But Ann Arden did marry well, William Grenville, Jr., don't you know, and she lived very well, to a point. To a point that her trashy, ill-tempered, paranoid roots took over and "Annie got her gun." Told by Billy Plant, one of the author's alter egos, this is classic Dominick Dunne without the incessant name-dropping, but with the terrific attention to detail he has brought to most of his writing. I found this book thoroughly enjoyable

Dunne at his best

Published by Thriftbooks.com User , 20 years ago
Actually, to say that THE TWO MRS. GRENVILLES is "Dunne at his best" almost is not fair, since Dunne always is at his best. This novel is a classic work by author Dunne, employing many of his trademark techniques.He took the basic plot from a real-life story of great notoriety, the shooting of New York socialite William Woodward. Did William's wife kill him? And, if she did, was that shooting accidental? Why would she want him dead? These are questions which have been asked in New York for almost fifty years and, here, Dunne posits some fictionalized answers to them.The title is a reference to William's mother, one of society's "grande dames," and to his wife, who had been a member of the lower classes. Their marriage had shocked society.Dunne explores their saga in his usual lively fashion, providing the kind of detail about the lives of the rich and famous that only an insider could know. As with all of his novels, THE TWO MRS. GRENVILLES makes for marvelous reading.

Published by Thriftbooks.com User , 22 years ago
In this story-behind-the-story, inconspicuous narrator Basil Plant tells his tale while directing the limelight onto Ann Grenville, the "murderess" accused of killing her exceedingly wealthy spouse in a fit of rage. Ann is a character the reader grows to love and hate, respect and pity. Her quest for acceptance on the topmost rung of the social ladder is both noble and pathetic, and is the core of a mesmerizing novel that aptly portrays the trials and manipulations of upper crust city life. I enjoyed this book immensely and would recommend it to anyone who enjoys reading about gossip, manipulation, murder and lavish debauchery.
Trustpilot
Copyright © 2022 Thriftbooks.com Terms of Use | Privacy Policy | Do Not Sell or Share My Personal Information | Accessibility Statement
ThriftBooks® and the ThriftBooks® logo are registered trademarks of Thrift Books Global, LLC