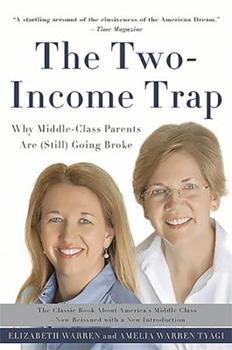 The Two-Income Trap: Why Middle-Class Parents Are (Still) Going Broke

From #1 New York Times bestselling author Senator Elizabeth Warren and consultant Amelia Warren Tyagi, the classic book about America's middle class -- and why economic security remains out of reach for many In this expos , Elizabeth Warren and Amelia Warren Tyagi show that modern middle-class families are increasingly trapped by the grinding reality of flat wages and rising costs. Warren and Tyagi reveal how a ferocious bidding war for housing and...

Explains with clarity, without blame

Published by Thriftbooks.com User , 14 years ago
In this book, I found an explanation to a question I've often considered: when two-income families of today are raking in more money than our parents' generation, why don't we have the bank accounts to prove it? The over-consumption theories never did make sense to me, since the middle income people I know shop at Walmart, drive old cars, and still worry about the bills. The culprit, to a great extent, is housing, the book theorizes. Americans have used the additional income to create a bidding war for homes in decent school districts in the suburbs, and the authors have the statistics to prove it. Even if I can't control some recommended solutions like implementing a limited school voucher program, there were about 20 pages of tips for the individual consumer. Besides, just understanding the mechanics of the family economy has given me plenty of food for thought. And if you are looking for a step-by-step guide about gaining control of your home finances, try Dave Ramsey's Total Money Makeover.

Stretching Too Far For The American Dream

Published by Thriftbooks.com User , 15 years ago
I believe one insightful portion of the dedication to this book sums up its thesis best: "..dedicated to all parents who wake up with hearts thudding over the possibility that buying school shoes and Girl Scout uniforms will mean that there won't be enough left over to pay the mortgage... They travel anonymously among us, but we know them. They went to college, had kids, bought a home, played by the rules- and lost." This is not the first time that Elizabeth Warren has sounded the alarm about stable, hard-working people going under in droves. Indeed, the contents of this book are actually a graphic, terrifying distillation of two previous books written by Prof. Warren (in collaboration with Teresa Sullivan and Jay Lawrence Westbrook) chronicling the rapidly evolving disaster of consumer bankruptcy in America. The first book, As We Forgive Our Debtors, was an outgrowth of the US Consumer Bankruptcy Project, and looked at all of the key players in consumer bankruptcy, focusing in particular on bankrupt debtors and their creditors; it was very academic in nature, which may have explained its tepid reception in the marketplace (however, I suspect the very incendiary comments and conclusions all throughout the book rankled quite a few feathers in the banking industry, and may well be the real reason the text was conspicuously ignored). The second book, The Fragile Middle Class, focused exclusively on bankrupt debtors, and looked closely at the fallout associated with consumer bankruptcy for several reference groups; it was less academic and more activist in tone, and actually preceded The Two Income Trap in sounding the alarm about US consumer bankruptcy. The Two-Income Trap also sounds the alarm, and zeroes in on the reference group everyone would readily say is most likely NOT to go bankrupt: two-income, solidly middle-class mothers and fathers with kids and a home in the burbs. This book, much like the ones before it, dispells the prevailing myths that the bankrupt are ignorant, low-income deadbeats, unrepentant spendthrifts who take advantage of a far-too-lenient system with giddy glee, and have no control over their impulses. Instead, each book has demonstrated that the bankrupt have to have a fairly high degree of financial savvy to even consider bankruptcy, that the majority of the bankrupt are solidly middle class, that most got in over their head in a situation far beyond their control, and all are profoundly embarassed by their bankruptcy, which all of them see not only as a financial failure, but also a personal one, as well. Yet, it is also clear to me that the spirit of activism, which was subdued in As We Forgive Our Debtors and quite forceful in The Fragile Middle Class, is not only alive and well in this book, but also very loud, and very clear; indeed, the activist tenor is quite torrential in this narrative. The authors, both women, clearly have written a book to discuss the plight of a particular reference group: middle

Published by Thriftbooks.com User , 18 years ago
This book describes two-income families competing ferociously with each other for homes in desirable school districts, driving home prices and property taxes to higher and higher levels, forcing many Americans to abandon their dreams of home ownership. All of this is done supposedly to benefit the children who, ironically, will be the first generation of Americans in history who will not be better off than their parents. Today's ordinary middle class kids live in McMansions, watch plasma TVs, play video games and ride in SUVs with built-in DVD players. Thanks to cheap foreign labor assembling products that our American neighbors used to make, we can all afford this stuff. But Americans have been duped. This generation?s rising college tuitions are bankrupting their parents. Once kids graduate they discover that the jobs they were promised have already been outsourced to brilliant young Indians who speak fluent English and received their educations courtesy of their own government. Unbelievably, this is the first generation of American college graduates that won't be fielding job offers. We American taxpayers unwittingly funded the Internet technology that revolutionized the way businesses operate, enabling people oceans away to perform white collar jobs formerly held by Americans. While all of this has been going on, many of those still fortunate enough to be employed are vainly plodding away working extra long hours so they can buy their kids fancier gadgets than their classmates have. Our value system needs an overhaul. A high performing society must have a healthy mix of stay-at-home and working people to keep the balance. Neighborhoods are safer and more pleasant to live in when retired and stay-at-home people are present. Fewer people competing for jobs means better jobs and higher salaries for those who do work. Maybe somebody's unemployed college graduate kid will find a good job because somebody else's mom or dad decided to stay home for a while. This is not sexism or a moral issue. This is common sense. The Two-Income Trap is a trap for all of society but it will especially hurt the children it was supposed to benefit.

Are You One Of These People?

Published by Thriftbooks.com User , 18 years ago
The financial decline of the middle class families began 30 years ago and continues to this day. So why are they only people that are proposing solutions to this decline academics who do quantitative and qualitative (case study) research, and then propose public policy societal solutions? Elizabeth Warren and Amelia Tyagi have the experience and are appropriate authorities on this phenomenon. They identify the primary reasons of it: fixed expenses. Those expenses which are constant and "come in every month" has increased substantially in the last 3 decades. Remember in the 1980s when the acronym word "DINK" was in vogue? Double Income No Kids. It may have sounded hip then but DINKS earn less today than one person earned thirty years ago, in 1973. It is a commonly known fact that middle class two-income earning families have been and still are losing economic ground. And they will continue to lose ground. Warren and Tyagi correctly argue with ample and valid evidence that it's not spending sprees, lavish vacations, or luxury items that are doing it. It's the necessities stupid. Property values supported with gargantuan mortgages are pushing debt ratios beyond the 38% considered the maximum safe and acceptable limit. Housing prices have outpaced wages significantly. Insurance premiums are constant and steady expenses that take a higher percentage of income today than in previous years and they too, are necessities. Education costs have risen dramatically more than wages. What's the American solution? Simply to borrow more money to pay for the higher tuition. Taxes have risen to mammoth proportions and take major chunks out of hard working families hard earned paychecks (taxation is not an issue delved into by the authors.) Again, the killer is the fixed expenses classified as "necessities." Both incomes today are significantly committed to necessities, such as mortgage and car payments, health care costs, insurance premiums, and children's and adult's education costs.The authors provide many practical and proven ways to assist folks in these situations (i.e., the "financial fire drill"). But the solution provided by the authors, who are experts in this field and are renown for their work is: public policy changes. Public policy changes take place when collective and coordinated societal "thinking" changes. Is this likely to happen? If the economic situation has been allowed to get to the point that it has gotten to now, then why would change finally be implemented now? Citizens didn't pay attention. Policy-makers (who are citizens) didn't pay attention. Most are still don't pay attention. Now a couple of academics are examining the origins and and growth of this problem and offering remedies for it. Few will understand and act accordingly. The masses will simply keep struggling and asking "why?" We know what the dilemma is and we know some of the solutions that can help resolve it, but will these proposed solutions ev

Published by Thriftbooks.com User , 18 years ago
This book manages to do three things at once: It tells real stories about families like mine, it conveys an enormous amount of interesting and original research in an easy-to-grasp format, and it makes some powerful suggestions for how to increase a family's financial safety. I especially liked "The Financial Fire-Drill," which recommends not cutting back on frills. This book is one new idea after another.I recommend this book very highly for those who want to learn about what is happening to the middle class or who want to put their own financial circumstances in a larger social and economic context--and do something about it.
Copyright © 2022 Thriftbooks.com Terms of Use | Privacy Policy | Do Not Sell My Personal Information | Accessibility Statement
ThriftBooks® and the ThriftBooks® logo are registered trademarks of Thrift Books Global, LLC