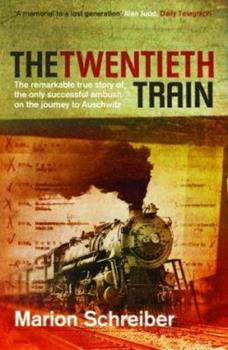 The Twentieth Train : The Remarkable True Story of the Only Successful Ambush on the Journey to Auschwitz

The Spring of 1943 was a desperate season for the Jews of Brussels. Having discovered the departure date of the next transport train to Auschwitz, resistance fighter Youra Livchitz and two school... This description may be from another edition of this product.

All that was promised

Published by Thriftbooks.com User , 12 years ago
The Twentieth Train came in perfect condition. I had previously reviewed the story and loved the translation as well as the way the story was simply presented. In my opinion all the important issues were included in the story. Beatrice Muchman

Published by Thriftbooks.com User , 14 years ago
There were many heroic acts of resistance to the German occupation in World War II, and naturally some were more significant than others. Unfortunately, there were people who were more interested in personal advancement than anything else, which made any act of resistance one containing a degree of personal risk. While the title emphasizes one particular instance, an armed attack of a train transporting Jews to the camps by partisans, the book is really more about a resistance movement. Belgium was unlucky to have been invaded and occupied by German forces in both world wars. Therefore, when it occurred for the second time in 1940, the population understood what would happen. The Belgian people engaged in passive acts of resistance whenever it was realistically possible and did a great deal to shelter their Jewish residents. Many Belgians risked a great deal, even their lives, to protect Jews from being captured and sent to the death camps. That, more than one single attack on a train, is the message that should be taken from this book.

Published by Thriftbooks.com User , 15 years ago
A fascinating story of University students who were inspired to create the circle of friends and then others to resist against the Nazi oppression in Brussels and Belgium during the Second World War. It was filled with facts of the bravery of so many. The genesis of the students from the Free University of Brussels having joined before the war into the group, Le Cercle du Libre Examen, were able to save numerous Jews and others from the Holocaust. Well worth the reading.

Published by Thriftbooks.com User , 17 years ago
Reading this book renews your faith in mankind. In this book there are many stories of people who resisted the Nazis and the thugs and gangsters who supported and collaberated with the Nazis. The book details the methods use to steal the property of the Jews before they were shipped to their death. How the Nazis lied and convinced most of the deportees that they were being transported to a workers paridise. It also shows how people cooperated with the Germans or paid or used influence to have their names removed from the list of Jewish deportees only to betrayed at the end. The book tells in detail how famlies were arrested and taken to a temporary holding camp waiting until a full train load of people had been collected and then sent to the death camps. Then, a group of young people each decide to do something to save lives. With no support from the allies or the underground they faced the Germans face to face and won. Their story of individual courage is fasinating. It clearly shows that there were many, many more courageous people in Belguim than there were Nazi collaberators. I loved this book. My copy of the book has been passed to at least 10 people so far. All the reactions have been the same; wonderful admiration of the courageous young heros.

Published by Thriftbooks.com User , 17 years ago
The Twentieth Train: The True Story of the Ambush of the Death Train to Auschwitz by Marion Schreiber is a true account of rescue in Belgium. After the Nazi invasion of Belgium in May of 1940, a camp was set up in Malines (or Mechelen in Flemish) for captured Jews. Their ultimate destination was Auschwitz, but a minimum quota of prisoners was required to fill a convoy, hence Malines, the collecting area. Tragically, there would be twenty-eight Belgian convoys to Auschwitz before the end of the war, but Marion Schreiber tells the little-known story of the ambush of the twentieth convoy. Executed entirely by three young men independent of the Belgian Resistance movement, the operation managed to free over 240 Jewish prisoners before the train reached Auschwitz. Of the rescuers, however, only one survived capture and death. Encompassing more than just the rescue operation, The Twentieth Train explores pre-war Belgium thorougly in much of the book. I enjoyed learning about this country's history as well as its amazing story of courage and rescue in World War II.
Trustpilot
Copyright © 2022 Thriftbooks.com Terms of Use | Privacy Policy | Do Not Sell My Personal Information | Accessibility Statement
ThriftBooks® and the ThriftBooks® logo are registered trademarks of Thrift Books Global, LLC