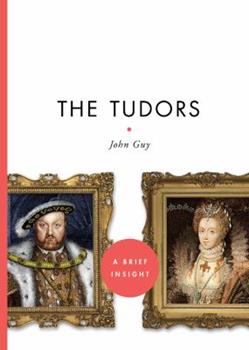 The Tudors (A Brief Insight)

Thanks to Showtime's hit series The Tudors , (the fourth season is set to air in Spring 2010), interest in the perennially popular Royal family is at an all-time high, and this enlightening work will appeal to the many viewers eager to learn more about them. John Guy provides the most authoritative overview of this age in British history, offering a compelling account of the political, religious, and economic changes that occurred under Henry VIII...

Published by Thriftbooks.com User , 14 years ago
I am working my way through the 8 entries in the Very Short Introduction series that were originally part of The Oxford Illustrated History of Britain, and I have not been disappointed yet. This very worthy entry in the series, covering the reigns of the Tudor monarchs, has been 'substantially revised and updated', as of 2000. Professor Guy introduces the chief protagonists and covers the main events of the period, as you would expect, but also challenges some widely-held views, some cherished myths. History has been especially charitable to Elizabeth I and harshly critical of Mary, and a little reassessment never goes amiss. The Elizabethan age is routinely referred to as a Golden Age. Guy points out that, for working people, an age of rapid population growth and falling real wages may not have seemed quite so golden. He also suggests that Elizabeth's failure to curb government corruption and to maintain tax revenues contributed to the conditions that would ultimately lead to the Civil War of the following century. Mary, on the other hand, being in many ways a victim of ill luck, may not have been as villainous as popular myth often suggests. Needless to say, a very short introduction can only whet your appetite, not satisfy it. This is both a good place to start and a useful source of fresh insights for readers that already have some knowledge of the period. Next stop, the Stuarts.
Trustpilot
Copyright © 2022 Thriftbooks.com Terms of Use | Privacy Policy | Do Not Sell My Personal Information | Accessibility Statement
ThriftBooks® and the ThriftBooks® logo are registered trademarks of Thrift Books Global, LLC