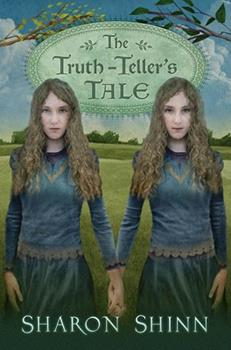 (Book #2 in the Safe-Keepers Series)

This sequel to The Safe-Keeper's Secret continues the story of the mirror twins Adele (a Safe-Keeper) and Eleda (a Truth-Teller). When the twins are 17, a handsome dancing-master and his apprentice come to stay at the inn, and thus begins a chain of romances and mistaken identity.

Published by Thriftbooks.com User , 13 years ago
This was a lovely story, flawlessly told. I'd give it a 9.75 out of 10. Beautiful job with the characters, the world, and the writing. Yes, the plot is quite predictable -- young adult readers might perhaps find it less so -- but the story's great charm prevents its predictability from detracting from the pleasure of reading it.

Published by Thriftbooks.com User , 14 years ago
The Truth-Taller's Tale (2005) is the second Fantasy novel in this milieu, following The Safe-Keeper's Secret. Adele and Eleda are mirror twins, born at the same time, but opposite in many ways. They look much alike, but one parts her hair on the left and the other on the right. They grow up to be a Safe-Keeper and a Truth-Teller. In this novel, Adele is the secretive one, who is able to lie at will. On the other hand, Eleda is always honest, unable to tell a lie under any conditions. Woe be to anyone who mixes the two and passes on a story to the wrong twin. Adele and Eleda are the daughters of innkeepers, so there are always chores to do. The inn is quite successful due to its location and often full of guests. The family's favorite guest, however, is the Dream-Maker Melinda, who stays there every Wintermoon. Melinda is very popular wherever she goes, but the inn is among her own favorite places. Every year Melinda asks Hannah -- the twin's mother -- what dream would she want and Hannah answers that she has everything she wants. But one year Melinda points out the nature of the twins and Hannah is both surprised and pleased; Melinda gave her a dream that Hannah never knew she wanted. In this story, the twins have a best friend, Roelynn, the daughter of the richest man in town. Her father Karro has a dream that he is convinced will come true; he believes that Roelynn will marry Prince Darian and become Queen. Karro has business interests with Queen Lirabel and visits the capital quite often, taking Roelynn, but somehow the prince is always elsewhere when he visits. Roelynn is very satisfied with that situation and continues to have affairs of the heart with the most unsuitable males she happens to meet. Since Karro almost has apoplexy many time over Roelynn's casual romances, something is bound to break sooner or later. Eventually, Eleda has an affair of her own, which would have turned out badly if Adele had not meddled. Later, Eleda learns of her sister's secret love and keeps this secret safe, which only her sisterly love makes possible. Once again, the author tells a heartwarming and personal story about two sisters, but this time more about sisterhood, friendship and romance than state secrets. Naturally, this story also has a surprise ending; to everyone, that is, except Adele, who knew all about it from the first. Another Safe-Keeper's secret. Highly recommended for Shinn fans and for anyone else who enjoys tales of ordinary people, extraordinary situations and true love. -Arthur W. Jordin

A subtle gem of a story

Published by Thriftbooks.com User , 15 years ago
This lovely tale works both on the surface and at a deeper level. Sharon Shinn deals with the sexuality and yearnings and dreams of young people in such a subtle, yet insightful way, that I found myself translating Truth-Teller and Safekeeper into metaphor, searching for the hidden import--and not being disappointed. This is a fantasy world, but it works as a model for the real world, for the conflicted personality of the adolescent, with a happy resolution that doesn't subtract the weight of the message. I loved it. I hope every young girl of my acquaintance reads it!

Published by Thriftbooks.com User , 16 years ago
"The Truthteller's Tale" and its prequel, "The Safekeeper's Secret" are both wonderful books and, although they are targeted to a young adult audience, I hope that doesn't stop adults (I'm almost 50) from picking up these gems. I've read some of Shinn's other books and, while they are very good, I don't think they have the magic of her young adult fantasy. She creates a world that is absolutely real and the pictures she draws with her words can break your heart (her writing reminds me of Alice Hoffman at times). I find it difficult to read a book where the characters are not sympathetic, no matter how well written. That is definitely not a problem with "Truthteller's Tale." Shinn has populated her little world with the most charming people imaginable. Adele and Eleda are twin sisters, one a Truth-Teller and the other a Safekeeper. They live in the small town of Merendon, and this book describes their friendship with a local merchant's daughter, Roelynn, her brother Micah, and their experiences with various characters, savory and otherwise, who pass through their small town. There are enough plots twists and little mysteries and romances to keep your interest throughout the book. Sharon Shinn must remember her own adolescent years very well, because the emotions and words of her characters ring true. They're enormously likable and very real. For many years, I never even looked at young adult or children's books because I thought I had "outgrown" them. Then one day I heard an interview with Lois Lowry, which prompted me to pick up "The Giver." From there, I went on to J. K. Rowling, Jonathon Stroud and Libba Bray and returned to some of my favorite authors from childhood (Kate Seredy, Jack O'Brien, Chad Oliver, Madeleine L'Engle). I was reminded of how magical these books are, and how a good book never has a limited audience. "The Truthteller's Tale" is such a book. It deserves a place on the bookshelf with your other treasured books, to be savored and read again and again.

Published by Thriftbooks.com User , 16 years ago
Twin innkeeper's daughters Adele and Eldea find their special talents are mirrors: Adele is entrusted with secrets while Eldea cannot tell a lie if asked a question. A handsome dancing master and his apprentice come to stay at the inn evoking romance, mistaken identity, and many secrets in this wonderful sequel to Sharon Shinn's The Safe-Keeper's Secret, which needs no prior introduction to prove a satisfying stand-alone fantasy.
Copyright © 2020 Thriftbooks.com Terms of Use | Privacy Policy | Do Not Sell My Personal Information | Accessibility Statement
ThriftBooks® and the ThriftBooks® logo are registered trademarks of Thrift Books Global, LLC