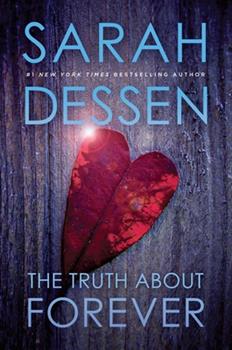 The Truth about Forever

From the award-winning and New York Times bestselling author of Once and for All Expect the unexpected. Macy's got her whole summer carefully planned. But her plans didn't include a job at Wish Catering. And they certainly didn't include Wes. But Macy soon discovers that the things you expect least are sometimes the things you need most. "Dessen gracefully balances comedy with tragedy and introduces a complex heroine worth getting to know." -- Publishers...

Not the best if you’re looking for romance.

Published by AKN , 2 years ago
I chose this book in hopes of getting a good butterfly-in-my-stomach romance but I was disappointed to never get that feeling when reading this book. I don’t suggest reading it if you’re looking for a good romance book. It’s one of those books where the boy is randomly and unnecessarily everywhere in the girl’s life that it just makes it so predictable. Probably won’t be rereading it. More of a friends to lovers if you can even call what they are “lovers”.

Published by Thriftbooks.com User , 15 years ago
When I finished The Truth About Forever, I picked it right back up again and read all my favorite parts again--which meant that I almost read the entire book over. It was the first of Sarah Dessen's books that I had read, and even after finishing many of her other books (including This Lullaby and Keeping the Moon, both great), it is still my favorite. The Truth About Forever is about sixteen-year-old Macy, who's father has recently died and who's mother has emotionally shut her out. She hides her loss behind a mask of perfection--everything has to be flawless...her hair, her boyfriend, her schoolwork. That is, until she meets the chaotic crew that is Wish Catering, who teach her things don't have to be perfect to be beautiful. She meets Wes, and through a continuous game of Truth with him, Macy learns that broken hearts, like her's, can be patched up again. Her rigid, ideal life begins to be chipped away, as she learns the real truth about forever. The moral of The Truth About Forever is that life isn't perfect. Everyone has that dark secret in their past, has that huge hole in their road, or is that girl who saw her father die. We accept the imperfections and move on. I really empathized with Macy, because a lot of the time, I too feel that I have to strive for perfection, which makes me lose focus on the things that really matter. This book also makes you think--what would you do if you saw your father die? Would you shut out the outside world and plaster on a makes of happiness, as Macy does? In The Truth About Forever, Sarah Dessen has flawlessly created the balance between humor and depression, between loss and love. The turbulent emotions of this book gripped me to the very end, and stayed with me long after I finished the book. I would recommend it to everyone, but especially teens.

Dessen Does it Again

Published by Thriftbooks.com User , 16 years ago
As a long time Dessen fan, I was eagerly awaiting this book, but held off reading it until recently, because I am always disappointed when I run out of Dessen books to read. I must say, this was WELL worth the wait, perhaps my favorite book of hers yet. This story is much deeper than any of her previous novels, but not overly dramatic to the point that it's too heavy to enjoy. The characters are fun, lovable, exciting, and unique making the story even better. Any young woman will be able to relate to Macy as she deals with the loss of her father, rejection from her boyfriend, and new friendships from a group of unlikely people. I fell in love with the story and the characters. She performed the magic that most writer's aren't able to accomplish: She took a simple plot and filled it with complex characters to live out the story. I was sad when it ended, but it's definitely one of those books you can read again. Very highly recommended.

A YA Novel Perfect for All Ages

Published by Thriftbooks.com User , 17 years ago
Although the heroine of this novel, Macy, is only seventeen, it's a wonderful read for anyone who has ever experienced the lost of a love one; for anyone who's strived to be the "perfect" person that everyone can know and love; and for every mother, daughter, sister, aunt, friend who has only wanted one thing from life--to be happy, loved, and accepted for who we really are. The last year and a half has been hard on Macy. After witnessing her father's death after a Christmastime morning run, she's strived to be the "fine just fine" girl--a perfect helper for her mother, a perfect balance to her older sister Caroline's wild days, and a perfect girlfriend to her genius boyfriend. But when Jason heads off to Brain Camp for the summer and unexpectedly asks for a "break" in their relationship, Macy's world is thrown even more off-kilter. She'd already committed to taking Jason's place at the Library Information Desk for the summer, and she hates the job, and the Miss Perfection girls she gets snubbed by on a daily basis. Her evenings are spent dutifully studying for her SATs the following year, and even her weekends are filled with helping her mother with her business and ironing her clothes for the week. Then, during a party her mother throws for prospective clients, Macy meets the staff members of Wish, a chaotic catering business. Delia, the very pregnant owner; Kristy, the scarred girl in the outrageous outfits; Monica, the Queen of the One Word Answer; Bert, who's convinced the end of the world is near; and Wes, a boy who spent time in reform school after his parent's divorce and then lost his mother to cancer. During this particular summer, Macy comes to realize that being the perfect daughter, sister, and girlfriend doesn't stop the world from being a crazy place. It doesn't insulate you from hurt. In fact, being spontaneous, creating new friends, looking outside the shell of a perfect existence, is the only way to realize the truth about forever--it can be two seconds long, or a hundred years. The moment you're living now is your forever, and Macy finally learns how to reach out and grab the moment. I really loved this book! Although touted as a YA read, I think any woman would enjoy it. It's sad, humorous, and compelling, a definitely wonderful read.

Published by Thriftbooks.com User , 17 years ago
Set in present time, The Truth About Forever, talks about a sixteen year old girl named Macy Queen. Since her father died of a heart attack, Macy has been keeping a simple perfect life. This summer, her boyfriend Jason went off to brain camp and they went on a break. She ends up working part-time at Wish Catering where she meets Delia, Wes, Kristy and others who help her understand that she can have some fun and that sometimes you just got to take risks. As the summer progresses, Macy and Wes get to know each other more and more. When reading this book I really gor hooked onto it and wanted to read on and on to see what shall happen next. I enjoy these kinds of books about teenage girls and their lives and how they deal with problems. This book was no exception because I liked the way each character's lives were pieced together in the story. I learned the same lesson that Macy learned, that being perfect is not the best thing to be. It is just better to be yourself. I also learned that anything can look beautiful because of the way Wes turned junk into beautiful creative things that people like Caroline, Macy's sister, wanted to buy. Just like every other book by Sarah Dessen such as This Lullaby, Someone like You and Dreamland, I would definitely recommend this book to any pre-teen/teen girl because she writes stories that we can relate to and learn things from.

Published by Thriftbooks.com User , 18 years ago
The Truth About Forever is very put together novel. It doesn't leave you with those uncertainty questions like: Well, why did that happen and how? Macy's father died a year and a half ago but she still hasn't really grieved yet. She also has a "perfect" boyfriend, Jason, who she thinks will make everything better. Wes and her other friends at Wish Catering show her what it's like to live. Macy learns to live and love life. Her and Wes's relationship grow stronger due to the fact that they share a common ground. But that's not all to it. I highly recommend this book of love, life, and death, to everyone who is willing to read it. Enjoy!P.S. It has nothing to even DO with Dawson's Creek. The two stories are completely different. Not to mention that this book was way more interesting than Dawson's Creek ever was.
Trustpilot
Copyright © 2022 Thriftbooks.com Terms of Use | Privacy Policy | Do Not Sell or Share My Personal Information | Accessibility Statement
ThriftBooks® and the ThriftBooks® logo are registered trademarks of Thrift Books Global, LLC